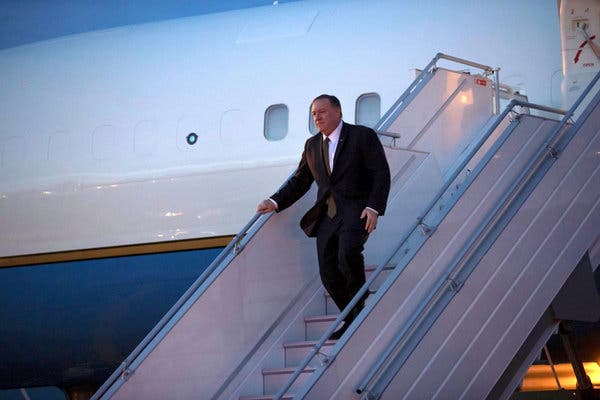 WASHINGTON — Secretary of State Mike Pompeo made a secretive trip in January to a Florida retirement enclave populated by prominent Republican donors while on the tail end of a diplomatic trip to Latin America.

He held the same kind of quiet meeting in December with Republican donors over a hotel dinner on a State Department trip to London.

And last October, he huddled with Charles G. Koch, the Republican billionaire and a longtime supporter of his, while on an official visit to Kansas aboard a government aircraft.

In each of those instances, Mr. Pompeo did not put the visits on his public schedule. He and his aides avoided telling the reporters traveling with them about the meetings, though some news organizations reported them afterward. And they took place as Mr. Pompeo was considering a run for the Senate from his adopted home state of Kansas and as he nurtures plans for a presidential bid in 2024.

Mr. Pompeo, President Trump’s most loyal and powerful aide, has not tried to hide his political ambitions. But he has chosen not to disclose certain meetings that appeared to be linked to those plans while on taxpayer-funded trips. The exact number of the meetings is unclear, though there is a pattern of activity.

For some of Mr. Pompeo’s official travels, the State Department does announce that he meets with American corporate leaders — that was the case when the secretary visited finance sector executives in New York City in early March — but the department gives no further details on the trips.

Such activities are coming under greater scrutiny after congressional aides said last weekend that the State Department inspector general, Steve A. Linick, who was fired by Mr. Trump last Friday at Mr. Pompeo’s urging, had opened an investigation into potential misuse of department resources by Mr. Pompeo for the personal benefit of him and his wife.

“What’s he supposed to do — not reach out and have social interaction with business leaders because his name has been associated with the presidential race? It’s part of the job,” said Alan Cobb, the president and chief executive of the Kansas Chamber of Commerce and a longtime friend to Mr. Pompeo and his wife, Susan Pompeo. “And the fact is, most wealthy business leaders are political donors — good luck finding one who is not.”

Yet Mr. Pompeo’s political meetings — and his domestic travels under State Department auspices — have attracted the attention of critics who accuse him of pursuing a personal agenda on taxpayer money.

American Oversight, a liberal legal watchdog group, has demanded that the State Department turn over details of all of Mr. Pompeo’s domestic trips.

“It’s becoming increasingly clear that Secretary Pompeo is using the State Department to support his political career, and is using the position of secretary of state to collect a Rolodex of powerful people to support him for whatever venture he sees next,” said Austin Evers, the group’s executive director, who worked at the State Department during the Obama administration.

Congressional aides said they had noted Mr. Pompeo’s unannounced side visits while on diplomatic business. Senator Bob Menendez, Democrat of New Jersey, called for a special counsel investigation last year into the legality of Mr. Pompeo’s frequent Kansas trips. The Hatch Act forbids federal employees from using their official positions to carry out partisan political activities, with the exception of the president and vice president.

Mr. Pompeo has not accepted any donations to his political campaign committee, and he has refunded about $3,000 in contributions since he joined the Trump administration, according to Federal Election Commission records.

It is unclear which of the investigations of Mr. Pompeo and his aides by the inspector general’s office, if any, prompted Mr. Pompeo to recommend the firing of Mr. Linick, who had served as inspector general since 2013, and whether the move was an act of retaliation to shield himself from accountability. Mr. Pompeo has said it is “patently false” that his actions were in retaliation against Mr. Linick because of any inquiries.

Democratic leaders in Congress have opened an investigation into the firing — they have demanded that agencies turn over relevant documents by Friday — and some Republicans have criticized Mr. Trump’s move.

The president appointed an ally of Vice President Mike Pence’s, Stephen J. Akard, to be the acting inspector general. Mr. Akard went to the office on Monday, despite the mandatory 30-day congressional review period over Mr. Trump’s actions, and told people there that he would keep his ambassador-level State Department job, as head of the foreign missions office, while serving as inspector general. In his new post, he would oversee a staff of hundreds working on inquiries into fraud and waste at the agency. Congressional aides said holding both positions was a conflict of interest.

The State Department did not answer questions about the blending of Mr. Pompeo’s official travels with his personal political agenda during the reporting of this article. Late Thursday night, after it was published online, the department released a statement that said: “The secretary’s travel is governed by the same series of laws, rules and procedures that have been in place under previous secretaries. The office of the secretary consults consistently across the department to ensure all travel is conducted appropriately and well within the bounds of each of those requirements.”

Mr. Pompeo has said in the past that his domestic travels are aimed in part at explaining the administration’s foreign policy to audiences nationwide.

Questions have grown in recent days about Mr. Pompeo’s use of agency resources because of news reports that the Pompeos hosted about two dozen lavish “Madison Dinners” at the State Department for hundreds of guests since Mr. Pompeo began his job as top diplomat in April 2018. NBC News, which obtained guest lists, reported the invited attendees included many prominent executives and Republican donors, as well as conservative media figures and Supreme Court justices. The only lawmakers invited were Republicans.

Contact information from the dinners is sent to Mrs. Pompeo’s personal email address. A State Department political appointee who is a longtime friend of the family’s, Toni Porter, helps organize the dinners as well as domestic trips and meetings for the Pompeos. Ms. Porter had been a focal point of Mr. Linick’s investigation into potential misuse of agency resources.

Over the past few months, Mr. Pompeo has met frequently with Brett O’Donnell, a Republican political consultant who has advised the secretary of state for six years, going back to when Mr. Pompeo was a congressman. Mr. O’Donnell, who declined to comment, has worked for several Republican presidential campaigns, including those of George W. Bush in 2004, John McCain in 2008 and Mitt Romney in 2012. He was with Mr. Pompeo last July at a speech in Orlando, Fla.

Before he ruled out a Senate run in early January, Mr. Pompeo traveled to Kansas four times in 2019 — three of them on State Department funds. He went to Wichita in October with Ivanka Trump, the president’s eldest daughter, to meet with students; to Kansas State University in September for a foreign policy speech; and to a Kansas City suburb in March to meet with business leaders. It was during the October trip that he quietly met with Mr. Koch and Dave Robertson, the president and chief operating officer of Koch Industries, to discuss a possible Senate run.

The Kansas City Star ran a scathing editorial on the frequent trips with the headline: “Mike Pompeo, either quit and run for U.S. Senate in Kansas or focus on your day job.”

In January, at the end of five days of travel mostly through Latin America, Mr. Pompeo gave a 17-minute speech to about 400 people in Bushnell, Fla. Afterward, he hopped in his motorcade — out of sight of reporters — to go to The Villages, a collection of retirement compounds. The address visited by Mr. Pompeo was listed on campaign finance records as one for political contributions from Mark Morse, the head of the family that developed The Villages, according to The Tampa Bay Times, which obtained local law enforcement records.

Last December, while attending a NATO meeting in London, Mr. Pompeo slipped away from reporters to go to a dinner event at his hotel where the guests included Republican donors. At the event, which was hosted by the Hamilton Society, a group of conservative American and British businesspeople, the few dozen attendees were told to leave their phones outside to ensure that Mr. Pompeo’s remarks would not be recorded, CNN reported.

Other trips that Mr. Pompeo has made with government resources but kept off the public schedule include ones to conclaves of businesspeople and officials where discussions remain off-the-record. He went to the secretive annual Bilderberg Meeting while on a diplomatic trip to Switzerland last year. He flew to the Allen & Company Sun Valley Conference in Idaho in 2019 and also in 2017, when he was C.I.A. director. Officials say the travel comports with his duties, but politicians aspiring to higher office also make important connections on those trips.

He has made speeches to military veterans in Indiana and Florida; has met with Senator Mitch McConnell, the majority leader, before an address in Kentucky; and has spoken at the annual American Association of Christian Counselors conference in Tennessee. All of those were announced by the State Department.

Mr. Pompeo, an evangelical Christian, is scheduled to visit Iowa in July for a speech to the Family Leader, a faith-based organization that hosted Mr. Trump and Senator Ted Cruz, Republican of Texas, as they considered running for president.

Past secretaries of state have hosted political donors at the State Department, and have also traveled to conferences with tycoons and given policy speeches in the United States.

Hillary Clinton, who had presidential ambitions while serving as secretary of state, made official visits in the United States and kept in touch with Democratic donors.

But she did not regularly host dinners at the State Department for mostly elite American guests on the scale of what the Pompeos have done, and she did not make extended official trips to her adopted home state of New York while considering a Senate run there, as Mr. Pompeo was doing in Kansas. She had already served eight years as a senator from New York. 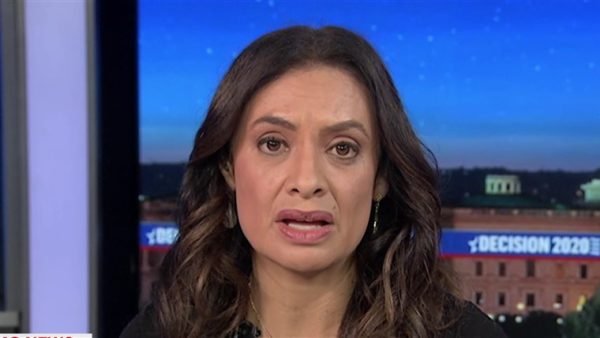 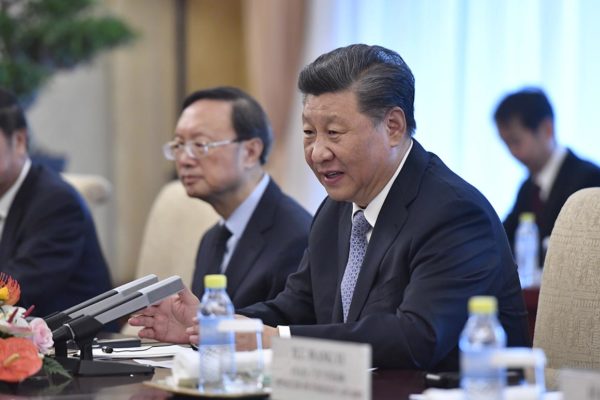 China and the perilous politics of coronavirus – POLITICO