WASHINGTON — Federal coronavirus unemployment insurance is scheduled to expire at the end of this month as the coronavirus pandemic makes a resurgence in parts of the U.S. and some 25 million out-of-work Americans are collecting benefits.

The Democratic-led House has passed legislation to extend the $600-per-week boost through January, but the Senate Republican majority is vowing not to continue that provision.

The top Senate Republican said Tuesday the unemployment benefit passed in the March CARES Act won’t be in the next phase of coronavirus relief, which he expects to pass by the end of July. He argued it has encouraged many Americans to remain jobless. 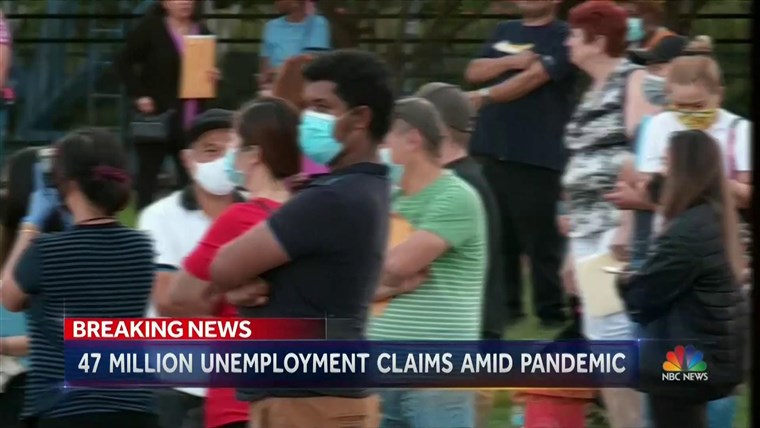 “Unemployment is extremely important. And we need to make sure, for those who are not able to recover their jobs, unemployment is adequate,” Senate Majority Leader Mitch McConnell, R-Ky., told reporters. “That is a different issue from whether we ought to pay people a bonus not to go back to work. And so I think that was a mistake.”

“And we’re hearing it all over the country, that it’s made it harder actually to get people back to work,” he added. “But to have the basic protections of unemployment insurance is extremely important and should be continued.”

McConnell didn’t elaborate on what Republicans have in mind.

In interviews by NBC News with nearly a dozen GOP senators on Tuesday, one consistent theme emerged: They are certain they don’t want to extend the $600 per week in emergency jobless compensation because they widely agree that it is motivating people to stay out of work. But they have little clarity on what ought to replace it.

Sen. Pat Roberts, R-Kansas, a senior member of the Finance Committee, said many in the caucus see the jobless benefits as “a disincentive to work — to come back to work.”

“It certainly does not have the backing that it had before because of many small businesses that have come forward and said that people just don’t want to come back — that they were making more than they did when they worked,” he said.

He said that with the U.S. “in reverse gear again in regards to the virus,” and the economic re-opening either paused or rolled back in many states, the politics could shift in the next month.

A June 4 report by the nonpartisan Congressional Budget Office found that if the jobless provisions in the CARES Act are extended through January, “Roughly five of every six recipients would receive benefits that exceeded the weekly amounts they could expect to earn from work during those six months.”

The report also found that extending the benefits would boost the national economic output in the second half of 2020 and lead to more spending on food, housing and other items than would occur if the benefits expired.

Senate Democrats are pleading with their GOP colleagues to extend the unemployment benefit, arguing that it has been a crucial lifeline to millions of out-of-work Americans.

Senate Minority Leader Chuck Schumer, D-N.Y., and Finance Committee Ranking Member Ron Wyden, D-Ore., introduced a proposal Wednesday that would extend the $600 weekly benefit and set it to incrementally reduce in states until their unemployment rates drop below 6 percent.

“If we fail to renew the $600 per week increase in UI, millions of American families will have their legs cut out from underneath them at the worst possible time — in the middle of a pandemic when unemployment is higher than it’s been since the Great Depression,” Schumer said in a statement. He said Democrats’ plan would “tie the extension of enhanced UI benefits to economic data — not politics.”

Sen. Ron Johnson, R-Wis., said he has proposed a federal plus-up in jobless insurance to two-thirds of a worker’s average weekly wages, which he said “doesn’t provide a disincentive to return to work.”

Some Republicans have proposed to let the enhanced federal jobless benefit in the CARES Act expire fully after July 31 and assist states with their unemployment systems.

“The added $600 was good, but it actually enhanced the savings rate in America to what’s probably the best in the last 50 years or so,” said Sen. Mike Rounds, R-S.D.

Sen. Roy Blunt, R-Mo., the chair of the Senate Republican Policy Committee, said it’s “too early to tell what will happen, but there’ll certainly be unemployment benefits.”

Senate Appropriations Committee Chair Richard Shelby, R-Ala., said, “We should help people when they’re down and out. And we have. But we have to be careful. Somebody’s going to have to pay this debt some day.”

Sahil Kapur is a national political reporter for NBC News.

Canadian federal election guide: What you need to know before Oct. 21 – The Globe and Mail