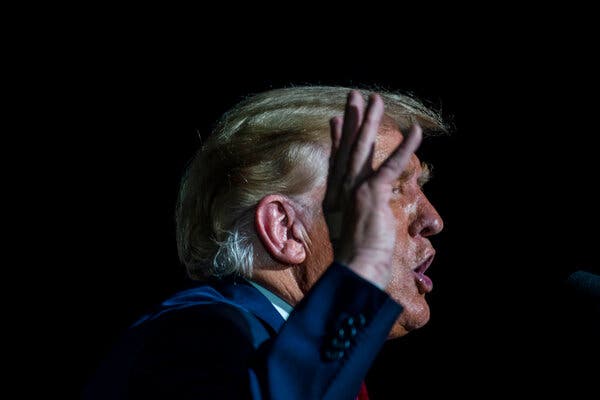 The arrest of more than a dozen right-wing extremists who are accused of targeting the governors of Michigan and Virginia is only the latest example of threats of violence, in some cases egged on by President Trump, that loom over the final weeks of a historically divisive race.

In rural Iowa, Laura Hubka, the Democratic chair of Howard County, recently took out a concealed-carry gun permit after signs for Democratic candidates in her region were vandalized with bullet holes and she was personally threatened, she said.

In central Wisconsin, Tom Stepanek’s wife sat him down last month at the kitchen table and warned him that the president might not accept a peaceful transfer of power if he lost in November. “Are you sure you want to be doing this?” she asked her husband, who is the chair of the Waushara County Democrats and had also been threatened. “You’re going to be a target here,” she told him.

In Pennsylvania, Elizabeth Burdick, a Trump supporter who owns a gun store with her husband in red-hued Mercer County, said, “Sales have been crazy.”

“People are afraid,” she said. “They’re afraid of what’s going to happen” after the election if Joseph R. Biden Jr., the Democratic nominee, wins.

With polls showing the president behind Mr. Biden nationally and in key states, Mr. Trump has descended into rants about perceived enemies, both inside and outside his administration, triggering in his staunchest supporters such fears for the outcome — possibly a “stolen” election, maybe a coup by the far left — that he is emboldening them to disrupt the voting process, according to national security experts and law enforcement officials.

National security experts said that American elections were usually nonevents for law enforcement, and that transitions from one president to the next were typically a peaceful pageant of democracy.

“But not this year,” said Chuck Wexler, the executive director of the Police Executive Research Forum, who said that multiple police chiefs were extending patrol shifts in the weeks before Election Day. “This year is unlike any year.”

In a report released this month describing threats to the United States, analysts at the Department of Homeland Security warned of potential plots that mirror the schemes in Michigan and Virginia thwarted by the F.B.I.

The International Crisis Group, whose mission is to sound an alarm ahead of deadly conflicts in hot spots around the globe, last month turned its attention for the first time to possible election-related violence in the United States.

Warning that far-right militias could take matters into their own hands in key states if ballots are contested, Robert Malley, the president of the group, said, “We would never predict civil war, but isolated incidents of violence could be quite serious.”

The months of anti-police protests this summer sometimes turned to looting and arson, and Mr. Malley said there were some armed extremists on the left. But he emphasized that the real concern came from the right, where violent messaging had already produced deadly results, including the shooting death of two people during protests in Kenosha, Wis. Mr. Malley said that in assessing the potential for further violence, “the balance very clearly tilts toward the responsibility of President Trump.”

The president has called on supporters to “go into the polls and watch very carefully,” a phrase that some security experts interpret as a call to take up arms and patrol polling stations. During the first presidential debate, he alerted the Proud Boys, a group associated with white supremacy, to “stand by.”

“It’s so concerning the president just doesn’t seem to have any kind of guard rails between what he thinks at the spur of the moment and what he says or writes,” said Janet Napolitano, the former secretary of homeland security. “We’ve seen it in the rise of these right-wing militia groups and it’s almost as if implicitly he’s giving them permission to take whatever action they want up to and including kidnapping a sitting governor.”

Gov. Gretchen Whitmer of Michigan, who was a reported kidnapping target of the suspects arrested by the F.B.I. last week, said over the weekend that extremists found “comfort and support” in Mr. Trump’s language, and in the president’s failure to condemn them.

Two of the 13 men arrested had brandished military-style rifles in the gallery of the Michigan State Capitol in April to protest the governor’s lockdown to fight the spread of the coronavirus. The men had talked of starting a civil war, according to the authorities, who linked them to the Wolverine Watchmen, a far-right militia.

The F.B.I. revealed this week that the men also talked of “taking” Gov. Ralph Northam of Virginia. Both governors are Democrats.

Among some Republicans, there are fears that any election-related violence would be driven by far-left groups, such as the loosely organized antifa movement.

Attorney General William P. Barr has consistently identified left-wing extremists as the greater threat to domestic peace, even though federal prosecutors in scores of rioting cases stemming from anti-police protests have focused on the far-right Boogaloo movement, which seeks a second civil war.

On YouTube, a far-right organizer named Mike Dunn has called for a “Boogaloo unity rally” on Saturday at the Michigan State Capitol, in Lansing, saying that he was barred from Facebook after posting there.

State Representative Sarah Anthony, a Black lawmaker from Lansing, who has used armed escorts to enter the statehouse after passing through protesters with Nazi and Confederate symbols, said: “Hopefully it will be peaceful, but groups like this are causing fear in my community. This is Trump’s army, the same ones who will show up at our polling places.”

None of this has stopped Mr. Trump from fear-mongering about leftist violence. “Biden will disarm law abiding Americans,” the president told supporters in suburban Virginia last month. “At the same time, they’ll have riots down your street and that’s just fine.”

Mr. Biden, campaigning in Pennsylvania over the weekend, said that the only way he could lose the election would be because of “chicanery” at polling places. He later clarified that he would accept the results. 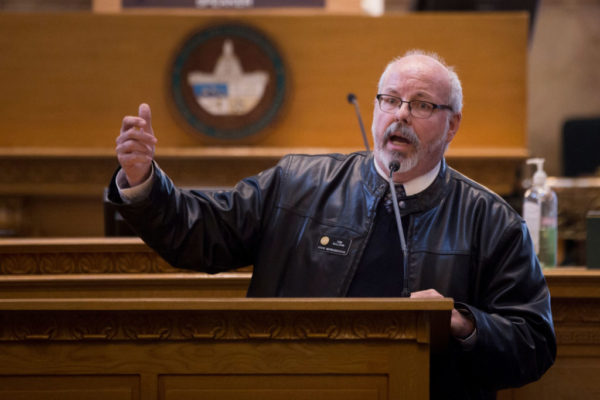 Faith and Politics: Members of the Kingdom of God, citizens of the United States of America – Independent Tribune