‘This is not magic’: Democrats work to make inroads in the South for the first time in decades – NBC News 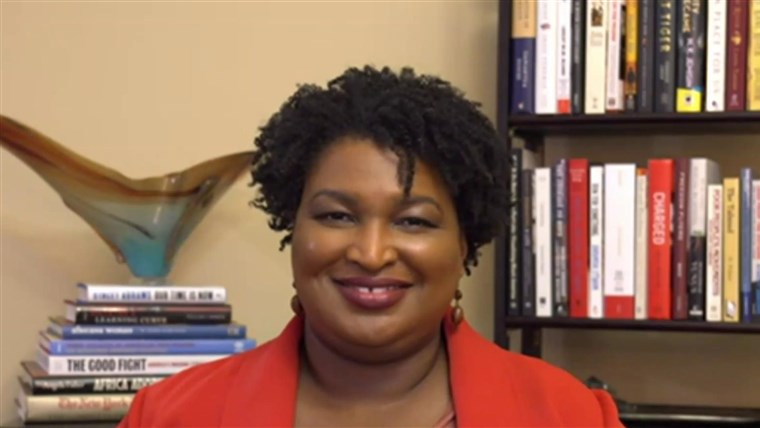 <a href="https://www.nbcnews.com/politics/2020-election/not-magic-democrats-work-make-inroads-south-first-time-decades-n1244580" target="_blank" rel="noopener noreferrer">'This is not magic': Democrats work to make inroads in the South for the first time in decades</a>  <font color="#6f6f6f">NBC News</font>

ATLANTA — Karen Ashley has walked with a handful of older Black men, residents of a low-income housing development, to the State Farm Arena each day early voting has been available in Georgia.

These strolls, which she called “wheelchairs and walkers to the polls,” are the culmination of months of work, including candidate forums and debate watch parties she held at the apartment building.

As the director of resident services at Friendship Towers, Ashley, 59, said she aimed to get all 106 residents — many of whom did not complete high school and had never voted before — to cast their ballots.

“I had the thought one time when I was looking at all of the negative back and forth between this group and that,” she said while accompanying some residents back to their homes. “And I said, ‘They don’t even consider this population.’ I said, ‘Guys, this is what we’re gonna do. We’re gonna register, we’re gonna vote and your voice will be counted.’”

It is voters like them who could make the difference in a number of increasingly contentious races in Georgia, where both Senate seats are competitive and Joe Biden could be the first Democratic presidential candidate to win the state since Bill Clinton eked out a 13,000 vote lead in 1992.

Even beyond Georgia, first-time and minority voters also have a large role in Democrats’ prospects across the South. The region is, in some ways, at play for Democrats this election cycle, particularly in a number of Senate contests that are now neck and neck just ahead of Election Day.

Despite the political convention that Republicans hold a secure grip on the South, Democratic candidates are polling competitively in North Carolina, South Carolina, Kentucky, Georgia, Alabama, Mississippi and Texas — which together account for eight Senate seats and possibly the balance of power in the chamber.

They could also help usher in additional Electoral College votes for Biden, though many experts remain skeptical whether Democrats can achieve a blue wave.

Still, Georgia races have grown increasingly tight in the past few years, which is why it remains the main target for Democrats. Since losing the state’s race for the governorship by only 50,000 votes, Stacey Abrams and her voter rights organization, Fair Fight, have helped register more than 800,000 new voters in the state.

By engaging with new voters in the South — many of them young and minorities — Democratic candidates hope to find a pathway Nov. 3 in a region often disregarded by their party and increasingly dominated by Republicans in the decades after President Lyndon B. Johnson signed the Civil Rights Act.

“It’s hard work over time, and it’s a deep commitment to the noble idea that your vote is your voice and your voice is your human dignity.”

Rev. Raphael Warnock, the leading Democratic candidate for Georgia’s Senate special election, is Black and the pastor at the Ebenezer Baptist Church, a pulpit made famous by Martin Luther King, Jr. He sees hope in the new Southern demographic. He worked with Abrams to register those 800,000 voters and noted that 49 percent of them are people of color and 45 percent are under the age of 30.

“This is not magic,” he said. “It’s hard work over time, and it’s a deep commitment to the noble idea that your vote is your voice and your voice is your human dignity.”

Early and absentee voting and donations to the campaigns of this strong class of Southern Democratic candidates would appear to indicate a groundswell of support — something long considered impossible in the South.

Democrats’ mail-in ballots and early in-person voting in Kentucky, where former Marine fighter pilot Amy McGrath is challenging the Senate Majority Leader Mitch McConnell, have outstripped Republicans by 17 points, according to NBC News’ count. Democrats have out-voted Republicans by 17 percent in North Carolina in early voting, a state where 2.1 million people have already cast their ballots — a 230 percent increase from this time in 2016. It remains to be seen how these numbers translate on Election Day, as they are inflated by drives to vote early during the pandemic.

In South Carolina, however, Democrat Jaime Harrison raised a historic $57 million in a tight race against the incumbent Sen. Lindsey Graham. In Texas, Air Force veteran MJ Hegar is polling within a few points of Sen. John Cornyn, the Republican Senate majority whip who has held the seat since 2002. Sen. Doug Jones, the first Democrat to win a U.S. Senate seat from Alabama since 1988, has outraised his opponent by about $18 million. And in Georgia’s other Senate race, Jon Ossoff appears to be tied with incumbent Republican Sen. David Perdue in each new poll released.

“Georgia becomes younger and more diverse by the hour,” Ossoff said. “And the political infrastructure that’s been built and invested here in Georgia over the last decade is paying dividends. We’ve seen record voter registration, we’re seeing record turnout and enthusiasm. We’re not paying much attention to polls day by day, but the turnout is really encouraging.”

It is unlikely that Democrats will win all of these seats, but the very fact they are competitive is significant. The chance for a Democratic victory even appears brighter in ruby red Mississippi than it has in decades. 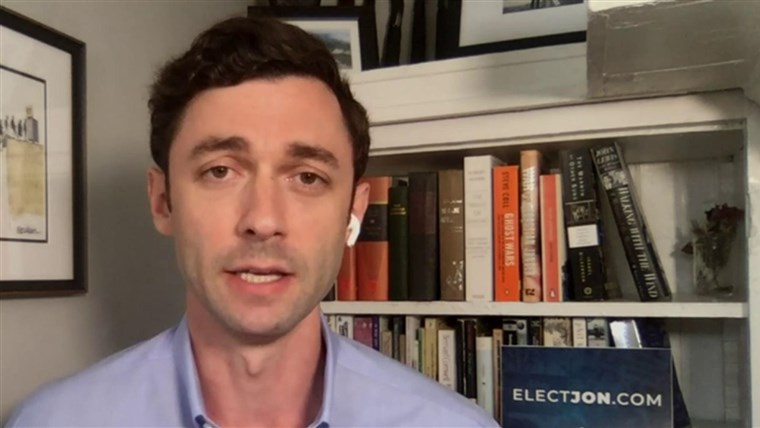 Democrats in Mississippi had not come within 14 points of this Senate seat since Republicans took official control of it in 1978. That changed in 2018 when Mike Espy, the secretary of agriculture under then-President Bill Clinton, garnered more than 46 percent of the vote in a special election for the seat and lost by 8 points.

Since his comparatively close loss, Espy — the state’s first Black congressman since Reconstruction — hopes to benefit from increased turnout during an election year while expanding his voter outreach and fundraising. In the final weeks of October, Espy raised nearly $3.9 million while his opponent, Sen. Cindy Hyde-Smith, the Republican incumbent, pulled in less than $85,000, according to Mississippi Today.

The math of his campaign, Espy previously told NBC News, is dependent on turning out Black voters, who make up nearly 38 percent of the state’s population, and reaching out to white moderates. The influx of cash appears to be helping.

“The reason no one won in the South in 25 years is because no one ran,” said Joe Trippi, a Democratic strategist who has advised Espy’s campaign and helped Jones win his Alabama race in 2017. “You’d sometimes have a good candidate run, but they had no capacity to raise money or get involvement from the national party. That’s changed now and for the first time in umpteen years, even if you don’t think Joe Biden can win there, voters in these places have a reason to vote.”

Jones’ success and the intrigue of candidates such as Abrams and Beto O’Rourke in 2018 brought the national gaze to the South in ways it hadn’t before, long after organizers had built up a grassroots movement by themselves.

Organizers said they took note of a shift in demographics away from white evangelicals, as well as a renewed engagement among young voters in reaction to the Trump administration.

Warnock, the pastor and Senate candidate in Georgia, has worked on voter drives in the state for decades — even driving Hurricane Katrina refugees back to Louisiana so they could vote. He said the South has long been defined by a “politics of fear and the divisions ensconced in the so-called Southern Strategy,” referring to the election strategy used by President Richard Nixon that many believe led to the political realignment of the South by fanning the flames of racism.

“What we’re witnessing is the reversal of that through changing demographics as a result of reverse migration, younger voters are responding to the moment and older voters are seeing how people in Washington are not thinking about them,” he said.

State Democratic parties in the South left their candidates and infrastructure to die on the vine for years under aging leadership. Reform has begun with younger and more diverse organizers taking control in recent years.

In the past year alone, members of the Mississippi and the Alabama Democratic parties forced out their party heads and ushered in new leadership that made them younger and more diverse than they have been in history.

Howard Dean, a former Democratic presidential candidate, is credited with creating the 50-state strategy in the 2000s, which aimed investment at state parties to have credible candidates compete for every office — a concept that was never truly realized. He said in recent years “state parties atrophied for the most part.”

“But that’s shifting again now,” Dean said, citing Alabama as an example. “A lot of parties that have been weak for a long time are getting stronger.”

That change began happening despite the lack of investment from the larger party structure, though Dean said the various wings of the Democratic Party are coordinating better than they have in years past

Still, Jones did not receive much support in Alabama until the end of his race in 2017, and Espy drew close in Mississippi without much help in 2018. In contrast, the Democratic National Committee is now funding major ad campaigns in North Carolina, Georgia, Florida and Texas and putting further investment in the races in Kentucky, Mississippi and South Carolina.

For the first time in decades, Democrats in the South have an opportunity, said Clay Middleton, a Black member of the Democratic National Committee who has worked as a political strategist across the South.

This renewed enthusiasm at the top of each state’s ticket can help each state party rebuild its long-forgotten infrastructure, allows for organizers to update their data, run ads, cycle dollars through local communities and build a bench of new leaders.

“I’m 38 years old, and I don’t ever recall there being this level of intentional investment into Southern Democratic Party infrastructure,” Middleton said, “which means we’re making progress and doing the right things.”

It remains to be seen whether this is a prolonged shift in Southern politics, or if it is a sudden invigoration caused by a caustic and unpopular president. It is still a deeply conservative and religious region, and some strategists warned that Democrats need to tread carefully.

Brian Walsh, a Republican strategist, said no matter how Democrats do, the GOP will have to reconsider itself as the party of Trump. Republicans, he said, ignored the warnings of the party’s 2012 election autopsy that concluded it needed to broaden its base by moderating its views on immigration and by reaching out to minority groups.

“One thing that always helps Republicans though is that the only other party is the Democrats,” Walsh said. “You have the extremes of both parties that are the loudest voices right now. They have to be careful to not overreach as well and suddenly support things like the Green New Deal or ‘Medicare for All.’”

But if these Senate candidates, functioning as the top of their state tickets, are able to get voters to turn out, that could change their states fundamentally in elections to come, experts said, especially as Democrats argue that a number of Southern state legislatures are in play, as well.

It remains to be seen, however, whether this is a moment of Democratic success or bluster.

“I just hope we don’t take a step back after all this investment,” Middelton said. “When the analysis is done, I think there is going to be a reshuffling of how we would look at the South in presidential years and otherwise.” 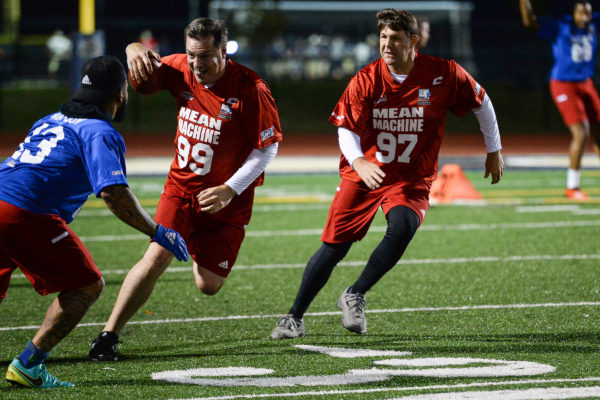 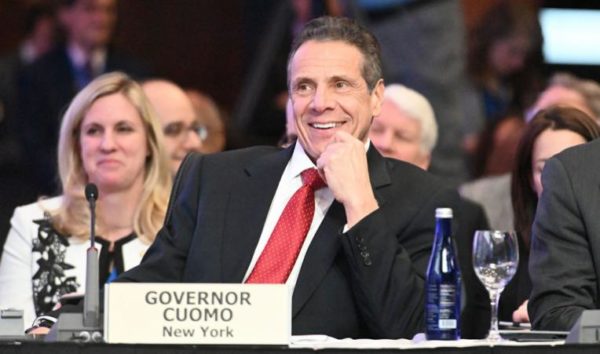