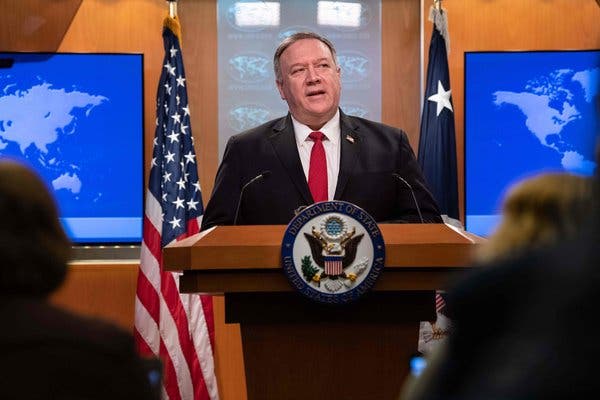 WASHINGTON — Four nations that are among the Trump administration’s top diplomatic adversaries were singled out on Wednesday for rampant human rights violations, raising questions of whether the State Department’s annual review of civil liberties protections worldwide was being politicized.

In previewing the 2019 human rights report — an assessment of 199 countries and foreign territories — Secretary of State Mike Pompeo named China, Cuba, Iran and Venezuela as among the worst violators, saying their governments had systematically attacked political protesters, oppressed free speech and journalists and, in some cases, spied on their citizens.

All four are targets of pressure campaigns by the Trump administration to install sweeping political, economic or military change by the ruling governments.

But Mr. Pompeo did not publicly mention violations — as detailed in the report — by governments whose authoritarian leaders President Trump recently has been reluctant to criticize, including in North Korea, Turkey and Russia.

The abuse in the four countries that Mr. Pompeo cited included the cases of Wang Meiyu, who died in prison after he was arrested in July for demanding elections in China, and of Pouya Bakhtiari, who was shot in the head by Iranian security forces during protests in November. Mr. Bakhtiari’s family was later arrested on counterterrorism charges.

“We pray for a day when Cubans, Venezuelans, Chinese, Iranians and all peoples can speak and assemble freely without fear of their own governments,” Mr. Pompeo told journalists on Wednesday at the State Department.

He said the report “honors those I’ve named and who have paid the ultimate sacrifice fighting for freedom and for human dignity.”

Each presidential administration has put its own political imprint on the annual review of human rights abuses by governments around the world. In years past, diplomats have focused on extreme examples — including China’s detention camps in 2018 or chemical weapons attacks in Syria in 2013 — to name and shame specific nations.

But Mr. Pompeo detailed crackdowns on political protests, free speech and privacy — abuses seen in many countries — to single out China, Cuba, Iran and Venezuela. The report itself identified others.

In Turkey, the report found, political dissidents were “disappeared” or victims of attempted kidnappings. In several cases, ethnic Kurds reported being tortured by security forces. In its defense, the government of President Recep Tayyip Erdogan of Turkey cited a policy of “zero tolerance” for torture.

In North Korea, numerous prisoners have said they were tortured, including by severe beatings, electric shock and prolonged exposure to heat or cold. And in Russia, journalists and political dissidents who published information that was not approved by the government of President Vladimir V. Putin were routinely fined under a new law prohibiting so-called fake news.

“I consider it a missed opportunity to focus only on U.S. adversaries and not underscore the universality of human rights obligations for all nations,” said Uzra Zeya, who oversaw the annual report’s research and release as an acting assistant secretary of state during the Obama administration.

She said the cases Mr. Pompeo cited in China, Cuba, Iran and Venezuela “were certainly legitimate.”

“But it’s the focus — only on those examples, without suggesting concerns elsewhere — that I think undercuts the message,” Ms. Zeya said.

Critics also noted that the report’s shifting language — on the recognition of Palestinian territories in the section about Israel, the West Bank and the Gaza Strip, as well as its diversion from protecting sexual identity and women’s reproductive rights — as a signal of political influence in the document’s conclusions. (It did, however, condemn forced abortions in North Korea, as well as the persecution of gay people in Russia.)

Additionally, the report found evidence of systematic corruption and human rights abuses in Guatemala, El Salvador, and Honduras — where the Trump administration is trying to return migrants who cross the southwestern border in search of asylum.

Joanne Lin of Amnesty International said that was an example of a foreign policy that leaves “people in dangerous and deadly conditions around the world with no help from the White House.”

To be sure, Mr. Pompeo has long criticized the detention camps in China’s western Xinjiang region, where about one million ethnic Uighurs and other Muslim minorities are being held in what Beijing has termed voluntary re-education programs. And the State Department has for years been critical of civil liberties abuses in Iran, politically motivated arrests in Cuba, and increasingly authoritarian leadership in Venezuela where, in 2019, a political uprising challenged President Nicolás Maduro in a continuing revolt.

Robert A. Destro, the assistant secretary of state for democracy, human rights and labor, said Mr. Pompeo’s focus on China, Cuba, Iran and Venezuela was of his own choosing and, regardless, they “reflect current American policy.”

“Any fair-minded person who reads these reports will see that they’re pretty hard-hitting across the board,” Mr. Destro told reporters after Mr. Pompeo’s remarks.

Notes on the State of Politics By Kyle Kondik – Rasmussen Reports

Analysis | The Trailer: Harris’s struggles nationally play out in her home state – The Washington Post