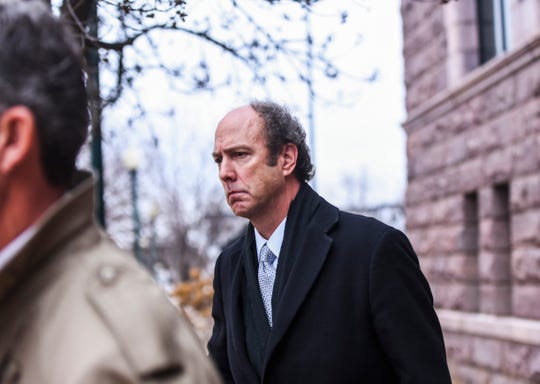 A Sioux Falls man who used his connections in the conservative movement to help his Russian girlfriend gain political access was sentenced Monday to serve seven years in federal prison.

Paul Erickson was not charged with any wrongdoing involving his efforts to help Maria Butina make inroads with political contacts. Instead, he was accused of defrauding investors in various schemes over the last 20 years.

Butina, who portrayed herself as a gun rights activist, was deported last fall after serving time for failing to register as a foreign agent. Her role in his downfall did not come up Monday.

More: From the archives: Who is Paul Erickson?

Erickson came under the scrutiny of federal investigators who were monitoring Butina. That scrutiny lead to an investigation of his various business enterprises, which existed to defraud investors. For example, Erickson had defrauded conservative investors starting in the late 1990s out of a company called Compass Care, which promised to build Christian-based nursing homes. He also had a venture in the Bakken Oil Fields in North Dakota that he used to defraud investors, according to his indictment. It was the Bakken incident that led Erickson to plead guilty. 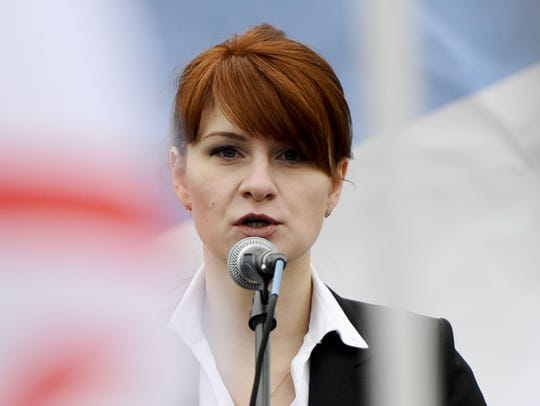 In this photo taken on Sunday, April 21, 2013, Maria Butina, leader of a pro-gun organization in Russia, speaks to a crowd during a rally in support of legalizing the possession of handguns in Moscow, Russia. (Photo: AP)

Judge Karen Schreier said Erickson had schemed former classmates, family members, even his god mother when she was ill.

“You’re a thief, and you have betrayed your friends and family, pretty much everyone you know,” Schreier said.

Erickson, a Yale University graduate who went on to earn a law degree from the University of Virginia, became involved in Republican politics during the Reagan administration. He worked briefly for Sen. Jim Abdnor, the Republican who beat George McGovern in the 1980 election. The Vermillion native traveled the world to historic events, including to the Berlin Wall when it was torn down and to Nicaragua, where he met anti-communist fighters there.

“You’re a thief, and you have betrayed your friends and family, pretty much everyone you know.”

In 1992, he helped Pat Buchanan mount an insurgent challenge to President George Bush. Though Bush was able to beat Buchanan to win the Republican nomination, he lost his re-election bid to Bill Clinton.

He also represented John Wayne Bobbitt, a man who became famous after his wife severed his penis.

In 2004, Erickson, who split time between Sioux Falls and Washington, D.C., organized a public bid to defeat Sen. Tom Daschle, then the Democratic leader in the Senate. But South Dakota Republicans, including John Thune’s campaign, kept Erickson at arms’ length because of his promise to run a negative campaign. Ultimately, Erickson did not play a role in the elections, which saw Thune defeat Daschle.

Clint Sargent, Erickson’s lawyer, argued Monday for Erickson to be confined at home. While unusual, Sargent said that Erickson had recently undergone a heart valve replacement, putting him at greater risk if he contracts coronavirus.

Jeff Clapper, an assistant U.S. attorney prosecuting the case, resisted the motion, saying the Bureau of Prisons could take appropriate action to screen and protect inmates.

Schreier sided with the government. She said she arrived at the courthouse Monday morning at the same time Erickson did.

“He walked in without a mask,” Schreier said, noting that if Erickson were so concerned with coronavirus, he would have taken the precaution of wearing one.

Following that exchange, Schreier announced that she was considering a higher sentence. She referred to the recent sentences that had been handed down to Tobias Ritesman and Tim Burns, two men prosecuted for defrauding investors in the Global Aquaponics scam in Brookings. Ritesman had been sentenced to 108 months in prison and Burns had received a 57-month sentence, and they had defrauded less money than Erickson had. The amount Erickson had defrauded investors, Schreier said, was $5.3 million.

Sargent asked for a 15-minute recess to confer with Burns, which Schreier granted. When they returned, Sargent made the case for a lighter sentence, pointing to all the letters of support that had been sent to Schreier on Erickson’s behalf. Erickson, Sargent said, was one of the most kind and generous persons that his supporters had met.

Sargent pointed to Erickson’s achievements in the political world, including working on aid efforts in Afghanistan during the Soviet occupation. Ultimately, Sargent said, Erickson was a victim of hubris and over confidence, which led him to create business plans that failed.

Erickson admitted that his “moral judgement failed” in what had been a routine business venture. He said he failed his faith and investors.

“Everything most precious to me has already been taken,” he said, noting that he had lost his right to vote and bear arms.

Schreier repeatedly questioned Erickson about his business failures, including why he had never bought land for a housing project in the Bakken. Erickson explained those failures as unfortunate

Clapper argued that Erickson had increasingly evolved over the decades, from establishing the appearance of legitimate businesses to just coming up with schemes that allowed him to cheat people who trusted him. Erickson’s personal guarantees to his investors turned out to be worthless.

“He went from one fraudulent scheme to another,” Clapper said, arguing for a higher sentence.

Schreier blasted Erickson for all of the victims he had cheated over the years. He used his friendships to bilk people out of their money, abusing his trust.

“The report is just replete with victims,” Schreier said.

Schreier said she was surprised, given the number of victims and amount of money he had cheated, that the pre-sentence report in the case suggested a sentencing range of only 33 to 41 months.

Schreier did give credit to Erickson for pleading guilty and taking responsibility for his crimes before handing down the 84 months sentence. That sentence will be followed with three years of supervised release. A decision on restitution for victims was deferred.

Erickson will be required to report to prison on July 20. Monday’s sentencing had been repeatedly postponed because of the coronavirus pandemic.

Congress is arguing over federal spending again. This explains why. – Washington Post