A security guard is posted during a Sept. 20 trip organized by the Saudi government to an Aramco oil processing facility, which had been damaged nearly a week earlier in a drone and missile attack. (Amr Nabil/AP)

When drone and missile attacks bombarded two Saudi Arabian oil facilities recently, the response from the Trump administration was fast and furious. Secretary of State Mike Pompeo asserted that Tehran was behind the “unprecedented attack on the world’s energy supply.” According to the administration, the attack was nothing less than an affront to the global economy and international law and order — and Iran would be held accountable.

Such a bellicose, locked-and-loaded approach to protecting oil interests is a relic of the past, one unlikely to lead to peace and stability. While the United States in the 20th century made global oil central to its security and power, recent decades should shake loose the notion that citing oil insecurity as a rationale for war is a wise choice.

One reason this idea endures is that anxiety about the stability of “global oil” has pervaded U.S. political culture since the middle of the 20th century. One great lesson of World War II was that “in war or peace, the United States has only one oil barrel,” as Interior Secretary Harold Ickes told Congress in 1945. Oil had been central to fighting the war, and by 1945 it had also transformed global transportation. A new system of fields, pipelines, tankers, refineries, fueling stations and bases emerged under U.S. control, ready to fuel the nation’s postwar security and economic prosperity. The new U.S. refinery and pipeline network laid end-to-end would reach “from New York to Yokohama via the sea route through Suez and Singapore,” Ralph Davies, an oil executive turned government official, told a Senate committee in 1945.

Ensuring an inexpensive and stable supply of global oil, largely from the Persian Gulf, became crucial to U.S. authority in the Cold War. From European reconstruction to the emergence of Asian allies as laboratories of capitalist success, oil from the Middle East was a necessary element of the American world-building project. At home, the celebration of energy-intensive abundance fanned out into all aspects of U.S. culture, from muscle cars to electric appliances to manicured suburbs. The prodigious use of oil was “the identifying feature of modern civilization,” said a 1968 pamphlet from the Interior Department.

That civilization depended on Middle East oil and, as one State Department official put it, oil was “a resource of the world.” In the generation after World War II, U.S. control over global oil became central both to the country’s national security and to the success of capitalism at home and abroad. Prices remained low and supply stable in the 1950s and 1960s, and Washington supported American-owned multinational companies by creating new markets, passing domestic tax breaks and supporting property rights.

For the most part, the U.S. government limited its direct role in securing global oil in the Middle East. But that changed in the late 1960s when Britain withdrew from its stations east of Suez, creating a regional vacuum that the United States sought to fill with arms sales to the “twin pillars” of Saudi Arabia and, especially, Iran. Despite their close ties to the United States, after the 1969 Libyan revolution, those pro-U. S. “moderates” worked closely with “radicals” in Libya, Iraq and Algeria to gain control over the production and price of oil. The Organization of the Petroleum Exporting Countries (OPEC) emerged as an important global force, and the oil nations wrested control over oil from the multinational companies in 1971.

The era of cheap and stable oil under U.S. control was coming to an end. In the Arab-Israeli war of October 1973, Arab oil-producing nations responded to U.S. support for Israel by imposing an embargo on oil sales to the United States. The crisis became full-blown when the other OPEC countries — including Iran, which took a lead role despite U.S. pleas — seized the opportunity to increase the price of oil fourfold.

At home in the United States, the short supply and high price of oil immediately upended domestic politics. High oil prices threatened American and global prosperity, and media outlets cited anonymous Pentagon officials who debated the possibility of invading Saudi Arabia. Secretary of State Henry Kissinger refused to take the military option off the table in a widely discussed interview with Business Week, in which he described the possibility of “the actual strangulation of the industrialized world.”

In successive administrations, anxiety about the cost and supply of global oil spurred bellicose rhetoric. The crisis worsened in 1979 during the Iranian Revolution, when high global demand and a temporary drop in Iranian output led prices to more than double. When the Soviet Union invaded Afghanistan that December, Americans worried more than ever about oil access.

The Carter administration called for greater military power in the Persian Gulf region and the Strait of Hormuz, which the president described as the world’s most important “choke point.” The U.S. increased covert assistance to anti-Soviet rebels in Afghanistan, supplied Pakistan with arms, developed naval and air access to Somali and Omani facilities, and fast-tracked arms sales to Saudi Arabia. President Jimmy Carter also created the Rapid Deployment Joint Task Force, a military group designed expressly to “ensure the unimpeded flow of oil from the Arabian Gulf.”

The Reagan administration continued the work of wedding oil security to the ideology of U.S.-led globalization. It secured congressional funding for new air bases, ports and communications facilities to counteract “the real and psychological impact of a curtailment in the flow of oil from the Persian Gulf on the international economic system.” President Ronald Reagan elevated the improvised Rapid Deployment Joint Task Force to the permanent U.S. Central Command.

Nor did this need for unhampered oil shape only foreign policy. Domestically, the Reagan administration was similarly hostile to any effort to limit, regulate or otherwise “disrupt” oil production within the United States. As he saw it, government regulation, especially environmental regulation, had driven the domestic industry into a depression, turning the once-rich oil lands of the West into what Treasury Secretary John Connally, a former governor of Texas, called “our own Appalachia.” Reagan’s interior secretary, James Watt, likened “environmental extremists” protesting drilling on public lands and offshore fields to Nazis.

The central assumption about the value of global oil, its vulnerability and its need for protection remained unexamined. In 1991, the George H.W. Bush administration led a multinational invasion force to push back the Iraqi invasion of Kuwait, in part to promote the stability of global energy markets. Economic sanctions were no substitute for military force, Bush told British Prime Minister Margaret Thatcher. A decade later, that military-first rationale led to another invasion. When the United States invaded Iraq in 2003, one of the key motivations cited was to protect global oil.

But in the decade after that invasion, Americans began to question the consensus view that they should shed blood for oil. Abroad, thousands have died in that unending conflict and others, and even stalwart supporters of U.S. power understand that military intervention has damaged regional stability and energy security in the Middle East. The turn to military power has proved costly in myriad ways, and there is a new growing consensus that in the political economy of oil today, persuasion instead of coercion, diplomacy rather than blood, would be a wiser option.

As more Americans become weary of endless war and its justifications, including oil, threats by the Trump administration to intervene militarily to protect global oil supplies should ring hollow. Not only are they likely to be counterproductive, they are anachronistic. Investments in alternative sources and efforts to lower consumption, rather than overweening military power, constitute a better strategy for the future.

On Politics: Bloomberg Under the Microscope – The New York Times 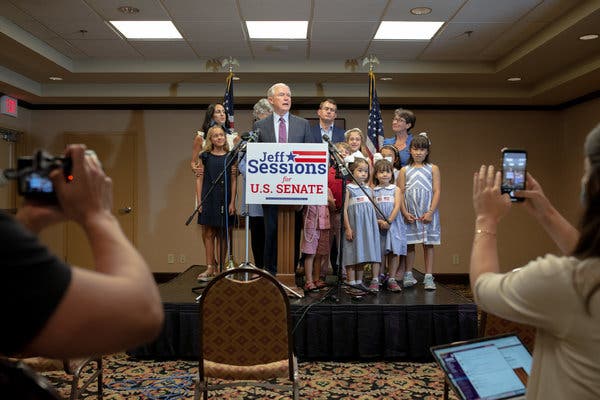