WASHINGTON — House Democrats on Tuesday asserted that President Trump abused his power by pressuring Ukraine to help him in the 2020 presidential election, releasing an impeachment report that found the president “placed his own personal and political interests above the national interests of the United States.”

The report by the House Intelligence Committee was a sweeping indictment of the president’s behavior, concluding that he sought to undermine American democracy and endangered national security, then worked to conceal his actions from Congress. Democrats left it to another committee to decide whether to recommend Mr. Trump’s impeachment, but their report presented what are all but certain to be the grounds on which the House votes to formally charge him.

“The founding fathers prescribed a remedy for a chief executive who places his personal interests above those of the country: impeachment,” it said.

The intelligence panel adopted it, strictly along partisan lines, hours after its release.

Though the committee indicated it would continue investigative work, the report’s release set in motion the next phase in the impeachment of Mr. Trump, accelerating a constitutional clash that has happened only three times in the nation’s history. Both parties are poised for a raucous debate in the House Judiciary Committee over whether to charge the president with high crimes and misdemeanors, the Constitution’s threshold for removal, and a likely partisan vote by the House to do so before Christmas.

The 300-page report provided some new details of Rudolph W. Giuliani’s frequent calls to the White House. But for the most part, it described the account that emerged over more than two months of sworn testimony from diplomats and other administration officials of how the president and his allies pressured Ukraine to announce investigations of former Vice President Joseph R. Biden Jr. and other Democrats, while withholding nearly $400 million in military assistance and a White House meeting for Ukraine’s president.

“The impeachment inquiry into Donald J. Trump, the 45th president of the United States, uncovered a monthslong effort by President Trump to use the powers of his office to solicit foreign interference on his behalf in the 2020 election,” the report said.

It asserted that Mr. Trump’s “scheme subverted U.S. foreign policy toward Ukraine and undermined our national security in favor of two politically motivated investigations that would help his presidential re-election campaign.”

And it detailed how officials at the highest levels of his administration — including Vice President Mike Pence; Secretary of State Mike Pompeo; Rick Perry, the energy secretary; and Mick Mulvaney, the acting chief of staff — either knew of the president’s efforts or were deeply involved in carrying them out.

Read the House Democrats’ Report on the Impeachment Inquiry

Making a case for urgent congressional action, Democrats tried to place Mr. Trump’s conduct in a broader context of wrongdoing that they said dated to the 2016 presidential campaign. Mr. Trump, they argued, first accepted help from one foreign power, Russia, to win the presidency, and then turned around and tried to enlist another, Ukraine, to bolster his 2020 re-election campaign.

“We do not intend to delay when the integrity of the next election is still at risk,” Representative Adam B. Schiff of California, the chairman of the Intelligence Committee, said after the report’s release.

Traveling with Mr. Trump in London for a meeting of NATO leaders, Stephanie Grisham, the White House press secretary, denounced the Democratic report moments after it was released. She called it the conclusion of a “one-sided sham process.”

“Chairman Schiff and the Democrats utterly failed to produce any evidence of wrongdoing by President Trump,” Ms. Grisham said in a statement. “Chairman Schiff’s report reads like the ramblings of a basement blogger straining to prove something when there is evidence of nothing.”

Earlier in the day, Mr. Trump savaged Mr. Schiff as “deranged” and “sick,” accusing Democrats of trying to overturn the results of the 2016 election through an impeachment inquiry he said “turned out to be a hoax.”

“It’s done for purely political gain,” Mr. Trump said. “They’re going to see whether or not they can do something in 2020 because otherwise they’re going to lose.”

The report laid out what it called an “unprecedented campaign of obstruction of this impeachment inquiry” by Mr. Trump, based on his refusal to release a single document from agencies including the State Department, the Defense Department and the White House budget office, and his directive that potential witnesses not cooperate. Even President Richard M. Nixon, whom the Judiciary Committee charged with contempt of Congress during the Watergate inquiry, produced voluminous records and allowed aides to testify voluntarily, the report noted.

“The damage to our system of checks and balances, and to the balance of power within our three branches of government, will be long-lasting and potentially irrevocable if the president’s ability to stonewall Congress goes unchecked,” the report concluded. “Any future president will feel empowered to resist an investigation into their own wrongdoing, malfeasance or corruption, and the result will be a nation at far greater risk of all three.”

It also showed that Democrats have collected more raw evidence than previously known, including telephone company records showing dozens of phone calls this spring among Mr. Trump’s personal lawyer, Mr. Giuliani, his associates and senior White House and administration officials, along with Representative Devin Nunes of California, the senior Republican on the Intelligence Committee.

Mr. Schiff told reporters that the call records showed “considerable coordination among the parties, including the White House” related to elements of the pressure campaign.

The calls came as Mr. Giuliani was executing a smear campaign against Marie L. Yovanovitch, then the ambassador to Ukraine, and pressing Kyiv to begin investigations that would benefit Mr. Trump. The records show calls between Mr. Giuliani; Lev Parnas, his business partner; Mr. Nunes; Mr. Nunes’s former aide Kash Patel, who works on the National Security Council; as well as unmarked numbers at the White House and the Office of Management and Budget that Democratic investigators suspect could be Mr. Trump or Mr. Mulvaney.

The report was a watershed moment for Mr. Schiff’s months-old inquiry, opening what promises to be a divisive phase in which the two parties will feud publicly over constitutional questions while competing to frame their own political narratives. Anticipating the split, Mr. Schiff used the report to lament the disconnect between the parties and warn that it amounted to precisely the kind of intensive polarization that worried the framers of the Constitution.

“Today, we may be witnessing a collision between the power of a remedy meant to curb presidential misconduct and the power of faction determined to defend against the use of that remedy on a president of the same party,” Mr. Schiff wrote. “But perhaps even more corrosive to our democratic system of governance, the president and his allies are making a comprehensive attack on the very idea of fact and truth.”

Still, he told reporters, Republicans’ dismissal of the case did not relieve Democrats of an obligation to press it forward. Indeed, House Democrats planned to huddle in the Capitol basement on Wednesday morning without aides to hear from Mr. Schiff and discuss next steps, according to Democratic officials.

The Judiciary Committee is scheduled to begin its debate on Wednesday with a public hearing that features four constitutional scholars discussing the historical standards for impeachment and their assessment about whether Mr. Trump’s actions meet the bar for removing him from office.

Lawyers for the Intelligence Committee are expected to formally present the report to the judiciary panel and answer questions from its members in the coming days, though no hearing has been scheduled.

Mr. Trump’s Republican allies on Capitol Hill released their own report on Monday, condemning the Democratic impeachment effort as illegitimate, and asserting that the president was not seeking personal political advantage when he pressed Ukraine’s leaders to investigate his rivals, but was instead urging the country to address corruption.

The Judiciary Committee will also consider potential evidence presented by other investigative committees and Robert S. Mueller III, the former special counsel, who documented Mr. Trump’s attempts to thwart his investigation into Russia’s interference in the 2016 election.

In the Senate, where it is increasingly apparent to leaders of both parties that the chamber is going to conduct an impeachment trial, Senator Mitch McConnell, Republican of Kentucky and the majority leader, made clear that he has been studying up on how to run one. He said he and Senator Chuck Schumer of New York, the Democratic leader, could work out a bipartisan agreement governing procedures for a trial, or failing that, that “51 senators of any particular persuasion” could set the tone.

“There is no answer at the moment,” Mr. McConnell told reporters. Two-thirds of senators would have to vote to convict Mr. Trump to end his presidency.

Speaker Nancy Pelosi formally announced the impeachment inquiry after a whistle-blower submitted a complaint in August that detailed a July 25 telephone call in which Mr. Trump urged President Volodymyr Zelensky of Ukraine to “do us a favor” by pursuing investigations into Mr. Biden and other Democrats.

But the impeachment inquiry quickly moved beyond the whistle-blower complaint as Democrats secured testimony — first behind closed doors and later in public hearings broadcast live on television — from more than a dozen Foreign Service officers, budget officials and senior staff at the National Security Council.

Written in narrative form, the report painted a portrait of a president eager to use the power of his office for personal gain, and a foreign policy establishment that watched with alarm as Mr. Trump’s allies exerted pressure on Mr. Zelensky to do the president’s bidding.

The first part of the committee report stretches more than 100 pages, documenting what Democrats described as a scheme that was “as simple as it was inimical to our national security and election integrity: The president was withholding officials acts while soliciting something of value to his re-election campaign — an investigation into his political rival.”

That language appeared meant to serve as a basis for the Judiciary Committee to argue either that Mr. Trump had committed bribery or that he otherwise abused his power — both impeachable offenses.

Citing sworn testimony, the report accused Mr. Trump of forcing out Ms. Yovanovitch, and putting his personal lawyer and others in charge of Ukraine policy. It said the president froze vital military assistance to Ukraine and blocked a meeting with the country’s president, then used both as leverage to secure the investigations he wanted.

And it recounted how Mr. Pence, who would become president should Mr. Trump be removed, was told by an ambassador that the military aid “had become tied to the issue of investigations” that Mr. Trump wanted announced.

“Vice President Pence nodded in response,” the report said, “apparently expressing neither surprise nor dismay at the linkage between the two.”

Mr. Trump has repeatedly denied all of the accusations against him, describing the call with Mr. Zelensky as “perfect” and insisting that he has done nothing wrong. Republicans in Congress have embraced the president’s defiant message as they assail the Democratic impeachment inquiry as deeply unfair and without merit.

The report’s authors spent more than 90 pages on the accusation that the president illegally tried to obstruct the congressional inquiry, arguing that Mr. Trump ignored the Constitution.

They cited Mr. Trump’s categorical refusal to cooperate with the investigation or comply with demands for documents. They said his refusal to allow top aides to appear violated the law. And they accused him of engaging in “a brazen effort to publicly attack and intimidate” witnesses who agreed to testify before the Intelligence Committee.

What Is the Impeachment Process? A Step-by-Step Guide

A detailed look at each stage in a process that could lead to the removal of President Trump. 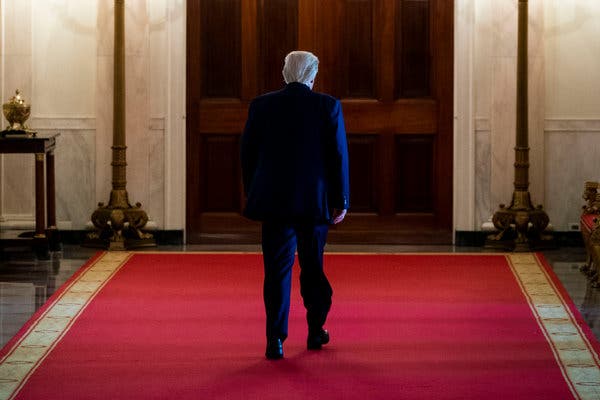 Biden vs. Trump: Live Updates for the 2020 Election – The New York Times 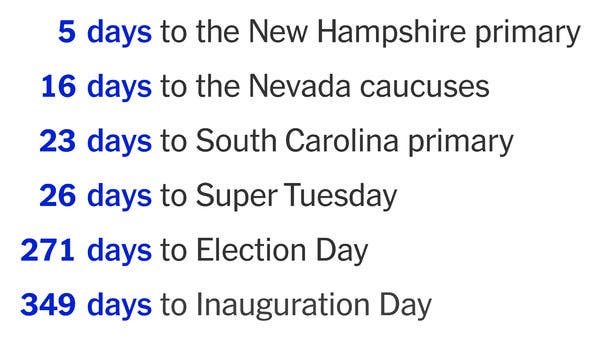