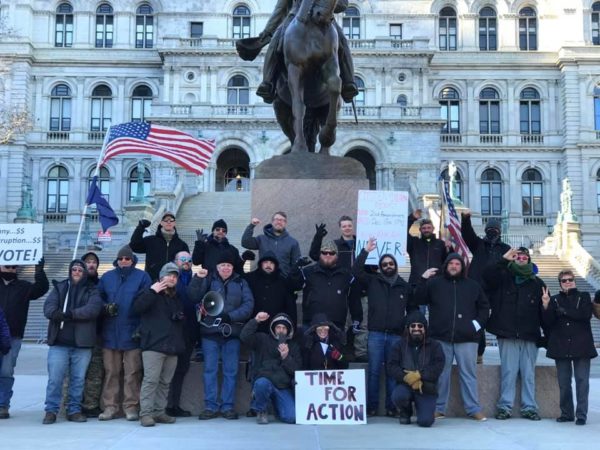 When a group of self-described patriots known as “Three Percenters” flashed a hand gesture popular with white supremacists outside the state Capitol in January last year, there were few people around to notice. But one year later, their cause has joined the cacophony of voices opposing newly enacted criminal justice reforms from within a Facebook group called Repeal Bail Reform that is moderated by high-ranking New York Republican operatives, where a link to the photo has appeared more than two dozen times in recent weeks among the comments on various posts.

The group’s moderators include state Republican Party Political Director James Thompson, Erie County GOP Chair Jesse Prieto and Assembly Minority Director of Conference Press Operations Nick Wilock – none of whom answered questions sent to them by City & State. The Facebook group has rapidly grown to more than 160,000 members since Sheriff Jeff Murphy of Washington County, which borders Lake George and Massachusetts, created it in early January. Many of the posts concern news stories about the purported excesses of bail reform, the laws that passed last session to reduce the use of bail in minor offenses, but these in turn have led to more inflammatory commentary that targets Democrats, immigrants, Muslims and others in the comments sections.

“It exposes the what has been the undercurrent for us of the bail rollback movement,” Jessica Wisneski, a co-director of Citizens Action of New York, said of the Facebook group. “It’s this undercurrent of racism and it’s an undercurrent that is perpetuating this kind of Trumpian fear-mongering, racist, anti-immigrant, anti-woman rhetoric that is all over – right wing national politics showing up right here in New York.”

The Repeal Bail Reform page is hardly the only online forum filled with incivility, but it is one used by GOP lawmakers and political operators to promote their views on the politically charged bail issue. Their success in reaching a wide audience in turn has catalyzed a response from group members that includes inflammatory comments that violate the group’s stated code of conduct in a variety of ways, whether it is profane, racist, or violent language. One user said Gov. Andrew Cuomo “needs to have some low life he released curb stomp him.” Another post tied bail reform to an international conspiracy against western civilization: “This is exactly what happened in Germany Sweden etc only they used Muslims Our legislators are using the indigenous lowlife population and crying racism Who is to say that these people haven’t been paid by the likes of Soros etc al?”

While Murphy acknowledges that such incivility has required him to step up oversight of the group, he appears to view it as the cost of reaching such a large number of bail reform opponents with just a few clicks. “We cannot monitor it 24/7,” Murphy said in an email, about the Facebook page. “The small percentage of people who made these inexcusable remarks does not take away from the more than 160,000 good New Yorkers from all backgrounds and ethnicity who are outraged by this policy and participate actively on this site.” He said more than 400,000 posts and comments have been made to the group in January.

To join the group, a Facebook user must request membership on the page that is subject to moderator approval based on their agreement to obey a code of conduct and their answer to a yes or no question about whether they support bail reform. “We have a zero-tolerance policy and have already blocked and deleted many of these comments and users already,” Murphy said. Moderators later contacted by City & State did not clarify by publication time whether posts and comments are subject to the approval of moderators.

The new criminal justice reforms include limits on cash bail for most non-violent misdemeanors and felonies, which supporters say even the playing field between rich and poor criminal defendants. Criticisms posted to the page cross the boundary of normal political discourse on a number of fronts. This includes misogynistic comments directed at state Senate Majority Leader Andrea Stewart-Cousins and Assembly Majority Leader Crystal Peoples-Stokes, racial dog whistles, suggestions of vigilante justice against criminal defendants, references to Islamophobic tropes, and a general demonization of supporters of bial reform. “Why are all democrats evil and not just the lawmakers you agree with,” commented one group member. “Why does the whole party have to be evil?”

While GOP lawmakers and their staff have not made such comments themselves, their posts have offered digital space for others to do so. In a comment under a post by state Sen. Fred Akshar, for example, another group member wrote that “hog farms make good disposal sites” for criminal defendants who might be targeted by vigilantes. Another comment thread, in response to a post by Senate GOP spokeswoman Candice Giove, included the comment that “we are OBLIGATED to take back our government by force if necessary” directly before Giove made her own comment warning that Democrats want to enact additional criminal justice reforms. The Senate GOP did not provide comment for this story.

The moderators have not condoned the use of politically incendiary language. And the group’s code of conduct technically prohibits “degrading comments about things like race, religion, culture, sexual orientation, gender or identity.” At least one time, a moderator pushed back. A Jan. 18 post by Murphy promoting a petition against bail reform asked members to “please be civil and courteous on this page because not doing so will get you blocked and you will be of no help to our cause.” But rhetoric that violates the group’s rules, is routinely posted in the comments, without drawing any response from the moderators.

Republicans have seized on bail reform as an issue that could help them find their way out of the political wilderness in a state where Democrats control the state Legislature and the governor’s mansion. “We’re going to hammer this every single day,” state Senate Minority Leader John Flanagan of Long Island, who is not affiliated with the Facebook group, told reporters at the state Capitol on Jan. 9. It remains to be seen whether the issue will propel the GOP to regain some of the political ground they lost after the 2018 elections, allowing Democrats to gain control of the state Senate for the first time in a decade. While the Facebook group is just one part of their social media outreach to voters, it has clearly allowed them to reach a large audience through a minimal investment of money and time.

In addition to stoking resentment against Democrats and criminal justice reforms, some posts have also contributed to misconceptions about how the new criminal justice reforms work. A case in point is a Jan. 24 opinion column in the New York Post that includes a stock image photo that shows a man with a handgun robbing another person for a stack of $100 bills under the headline “It looks like New York’s getting the crime uptick politicians have been asking for.” The column concerns a rise in some reported crimes in New York City in January 2020 compared to January 2019, but it should be noted that armed robbery with a handgun is a criminal offense where the applicability of cash bail has not been affected by the new law. Such nuance has evidently been lost among some members of the group who responded to a post that linked to the column in a comment thread focused on how Democrats are supposedly intentionally promoting lawlessness to promote a Marxist takeover of state government.

Fears like these have helped drive new recruits to causes including an upstate chapter of the Three Percenters, which is organizing a March rally in Albany against bail reform that has been plugged in the Repeal Bail Reform group in the comments by various users more than two dozen times. While that might be just a tiny fraction of the overall comments on the site, the Three Percenters have gotten a lot more attention than they typically do. “There could be a couple hundred people came off that bail reform page and came onto my page,” said John Smaldon, a resident of Booneville in the Adirondacks, who manages a Facebook page of New York Three Percenters. “We’ve done a lot of marches in the past, and not many people come in New York.” Even a few comments among hundreds of thousands can make a big difference for groups on the political fringes.

The Three Percenters name is a reference to the 3% of American colonists who supposedly took part in the American Revolution. That is what Smaldon said his group was referencing by pinching the forefinger and thumb and holding up the other three fingers. That same gesture has also been identified with white supremacists who adopted it in recent years following its introduction into right-wing political circles through the website 4chan. It began as a fake gesture of “White Power” to troll liberals, but eventually became a real gesture. “The ‘okay’ gesture hoax was merely the latest in a series of similar 4chan hoaxes using various innocuous symbols,” reads a post on the website of the Anti-Defamation League. “In each case, the hoaxers hoped that the media and liberals would overreact by condemning a common image as white supremacist.” Extremists now use it at times to signal “white power,” according to the Southern Poverty Law Center.

While the Three Percent movement in the past has been identified with white supremacy – movement members reportedly provided security for white nationalist protesters at the 2017 “Unite the Right” rally in Charlottesville, Virginia – there have been efforts in recent years to draw a distinction, including in Smaldon’s group. “You can’t say it’s anything racial because we take anybody: black, white, Puerto Ricans,” he said. “It has nothing to do with race.” The group was among those that participated in a January rally in Richmond, Virginia that brought together a broad array of groups from the political right to protest new gun control laws.

Smaldon said that he, like other supporters of President Donald Trump, believes bail reform is just another sign that the country is getting overrun by undocumented immigrants, political radicals and general lawlessness. “All law-abiding citizens right now are at risk we are all at danger for what our government did,” Smaldon said. “It just seems like everybody is against us all of a sudden.”

While Smaldon and his fellow Three Percenters exist on the fringes of the political right, they are taking advantage of the same political opportunity that mainstream Republicans see in bail reform. With a significant segment of the statewide electorate in opposition, both the GOP and the fringe groups the party has flirted with in recent years stand to gain if they can only reach their target audiences. “This has really been a real hot topic,” said Smaldon.

Both Parties See Control of the Senate as Pivotal. Here Are the Key Races They’re Watching. – The New York Times