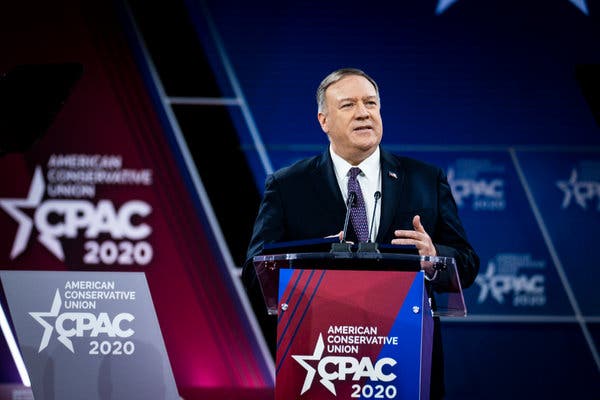 WASHINGTON — The name Covid-19 was clinical and nondescript, and that was exactly the point when the World Health Organization revealed it to guard against stigmatization of the place from which it originated. But a month later, the recommended terminology for the coronavirus has not extended to every corner of politics.

Some conservative politicians and officials, including Secretary of State Mike Pompeo, are using “Wuhan virus,” a term that proliferated on news sites and in political commentary, mostly before the virus received an official name. Senator Tom Cotton, Republican of Arkansas, has frequently used the term on the Senate floor, and on Monday evening, Representative Kevin McCarthy of California, the House minority leader, drew criticism for calling the disease “the Chinese coronavirus” in a tweet. Representative Paul Gosar, Republican of Arizona, used it when announcing that he and several staff members had come into contact with a person who attended the Conservative Political Action Conference and tested positive for the virus.

“I am announcing that I, along with 3 of my senior staff, are officially under self-quarantine after sustained contact at CPAC with a person who has since been hospitalized with the Wuhan Virus,” Mr. Gosar wrote on Twitter. “My office will be closed for the week.”

What followed was a torrent of online criticism that his comment was xenophobic and racist, and that attaching geography to a virus that was first detected in Wuhan, China, will lead to continued stigmatization of the Chinese. Among the critics was Representative Ted Lieu, Democrat of California, who tweeted on Monday that the term was “an example of the myopia that allowed” the virus to spread in the United States.

The debate over racism, the coronavirus and partisan politics has grown uglier by the hour, and it is precisely the type of geopolitical back-and-forth that health officials have tried to avoid since releasing more stringent guidelines for naming viruses in 2015.

“This is the consequence they didn’t want by calling it the ‘Wuhan Virus,’” Frank Snowden, the Andrew Downey Orrick professor emeritus of history and history of medicine at Yale University, said in an interview.

Get an informed guide to the global outbreak with our daily coronavirus newsletter.

Of the politicians who are using the term, he added: “I think that’s actually quite an aggressive thing and politically charged, and I imagine that people that are still calling it that are using it in a very loaded, ethnic way, and I believe it’s mainly associated with people on the political right. That shows exactly the wisdom of trying to refer to something scientific and factual.”

Attempts to assign blame to a certain place or people in the face of a global health scare have occurred throughout modern history, and it is a phenomenon that public health officials have tried to guard against in recent years.

During the Spanish flu pandemic of 1918-19, which killed tens of millions of people, some Americans incorrectly blamed Germany — a World War I enemy — for the spread of the disease, calling it “a Hun of a disease” in some communities, Monica Schoch-Spana, a medical anthropologist at the Center for Health Security at the Johns Hopkins Bloomberg School of Public Health, said in an interview. Rumors and misinformation were rampant at the time, including the conspiracy theory that pro-German doctors and nurses were intentionally spreading the disease to soldiers at Camp Meade in Maryland.

The phrase “Spanish flu” is itself a misnomer: The Centers for Disease Control and Prevention say experts are still not sure where the disease originated.

More recent examples include the severe acute respiratory syndrome, or SARS, outbreak in 2003, which was first detected in the Chinese province of Guangdong and led to discrimination against Asian-American communities in the United States.

The 2009 swine flu, or H1N1, outbreak originated in Mexico and led to accusations of racism against the Latino community. The illness was not transmitted through pigs, but China, Russia and other countries still banned pork imports. In Egypt, health officials ordered a mass slaughtering of hundreds of thousands of pigs, which were raised almost exclusively by the country’s Christian minority.

In this outbreak, Mr. Gosar and members of his congressional staff have been aggressive in pushing back against criticism of their use of “Wuhan virus.” They have also shared screenshots of news articles that used the term in headlines, many from the weeks before the virus received an official name.

“The only people who seem outraged by the term ‘Wuhan Virus’ are those whose primary goal is to continue” politicizing the outbreak, Ben Goldey, the congressman’s press secretary, wrote in an email on Monday. “Our priority is ensuring the health and safety of the American people, not debating the use of the term ‘Wuhan virus.’”

For Mr. Pompeo’s part, a State Department official said on Monday that the secretary was using this language to counter Chinese Communist Party disinformation. This echoes public remarks made by Mr. Pompeo, when he rejected a suggestion made last week by Zhao Lijian, a Chinese Foreign Ministry spokesman, that the coronavirus may not have originated in China, and that it was “highly irresponsible” to connect the two.

In a slate of interviews, Mr. Pompeo did just that. He also accused the Chinese of withholding information as the virus spread and conspiracy theories proliferated, some claiming the virus had actually come from the United States.

“As a first matter, the Chinese Communist Party has said that this is where the virus started,” Mr. Pompeo said in an interview on “Fox & Friends” on Friday. “So don’t take my word for it, take theirs.” By Monday, the Chinese were targeting Mr. Pompeo directly.

“We condemn the despicable practice of individual U.S. politicians eagerly stigmatizing China and Wuhan by association with the novel coronavirus, disrespecting science and W.H.O.,” Geng Shuang, another Foreign Ministry spokesman, said at a news conference. “The international society has a fair judgment, and Pompeo’s attempts of slandering China’s efforts in combating the epidemic is doomed to fail.”

In this case, it took health officials more than six weeks to give the coronavirus an official name since the first reports of its existence began in Wuhan in late December. The delay was due in part to debate over not choosing a name that could cause discrimination against people, places or animals.

“We had to find a name that did not refer to a geographical location, an animal, an individual or group of people and which is also pronounceable and related to the disease,” Tedros Adhanom Ghebreyesus, the director general of the World Health Organization, said at a news conference on Feb. 11, the day the organization named the disease. “Having a name matters to prevent the use of other names that can be inaccurate or stigmatizing.”

The concern now is that despite the official name, history — complete with name-calling, rumors and misinformation spreading — may be repeating itself in a fractured political and media environment.

“There’s no reason to add any fuel to the fire during an outbreak when people are already on edge and inclined to blame the problem on other people,” Dr. Schoch-Spana said.

Mueller, border policy, state politics, buying Greenland, impeachment and more: this is how we covered US politics and policy in 2019 – USAPP American Politics and Policy (blog)