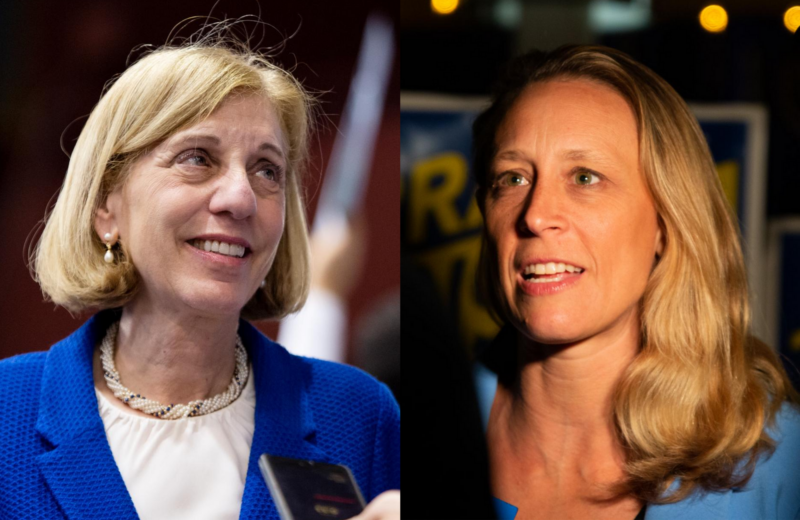 As promised, here are our new graphs on fundraising in some of the most important local races. There were some really interesting surprises.

But before we get to that, a shoutout to Mason Herron, who once again organized all the data. This time, apparently with some time on his hands, he set about building a pretty great new website for local politics nerds.

Check out: www.theballotbook.com. Herron is offering it free for now but may end up charging. It’s got data for every district in San Diego, including registration, past performance, current candidates, etc. You can set up your own customized dashboard to track the things you want to follow including independent expenditures and ballot measures. It’s pretty good.

He thinks some people may want to eventually pay for a subscription but it’s free for August.

“I’ve always enjoyed reading the reports, this is an element where you can just zone out a bit and poke around to see what story it tells,” he told the Politics Report.

Let us know what stories you find.

On the data below: This time we have included cash on hand, along with cash on hand minus debts. Remember several candidates have given themselves loans, and there’s no obligation for candidates to spend the money they loan to their campaign. Some do not spend it all. The loans are also important because, unlike contributions, they can be returned to a candidate. So if a candidate loans himself $50,000 and he wins, people will want to give him money and help him get some of that back in his pocket.

But if the candidate does end up spending the money she loans to herself, then it’s more like cash than like debt owed to a vendor. The problem is, there’s no way to tell from campaign filings if they truly intend to spend the money they loan to themselves.

Loans matter, in other words, but not all loans are created equal.

County Board of Supervisors, District 1

This district is going blue now that Republican Greg Cox is termed out. But Democrats Nora Vargas and Ben Hueso are very different people. Vargas has been racking up endorsements, including from the Democratic Party itself.

And she will need it. The party may need to help her make up a major gap in both fundraising and cash on hand versus Hueso. 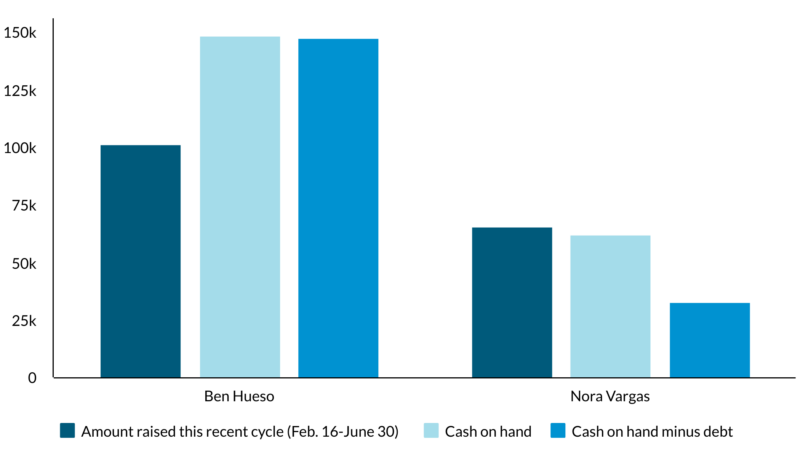 County Board of Supervisors, District 2

Former state Sen. Joel Anderson is a relentless campaigner and he continues to have fundraising success. He also has the support of the Republican Party. But fellow Republican Steve Vaus has been keeping up, and now has more money on hand to go along with a pledge for support from current District 2 Supervisor Dianne Jacob, who has hundreds of thousands of campaign dollars just waiting to be spent. 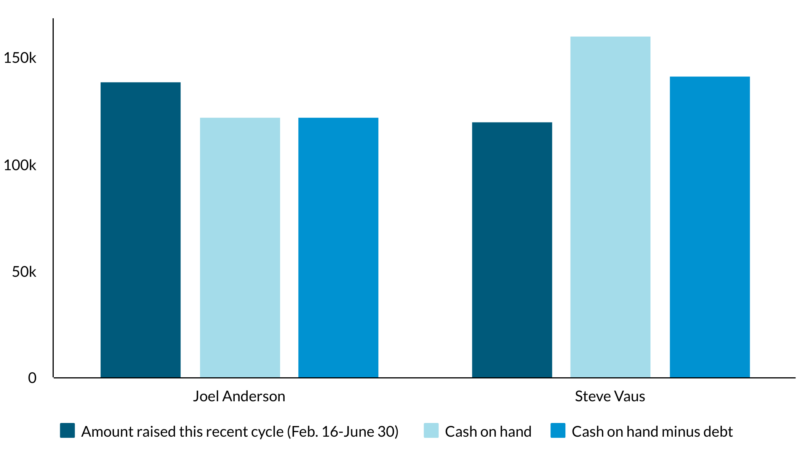 County Board of Supervisors, District 3

County Supervisor Kristin Gaspar, a Republican, has always faced a tough re-election. The partisan polarization in her district is a weight against her. But she got the opponent she clearly preferred to face in the runoff in Terra Lawson-Remer. This was always going to be a tight and closely watched race.

But we had no idea that fundraising was a weakness for Gaspar. A prominent North County Republican shouldn’t have this much trouble.

Gaspar still has a lot of cash on hand with little debt so she can still put out campaign ads, but this was kind of a shock.

“She didn’t fundraise,” he wrote in a text. “She’s devoted an extraordinary amount of time to dealing with COVID on the Board. She’s also a business owner who has to navigate the challenges her family’s business is facing, and she’s a mother of three who has to deal with the challenges they face. She didn’t feel it was an appropriate thing to do, particularly considering the hardships so many San Diegans are facing. She just wasn’t comfortable asking people for money in this environment.”

Gaspar and her husband have a physical therapy business. 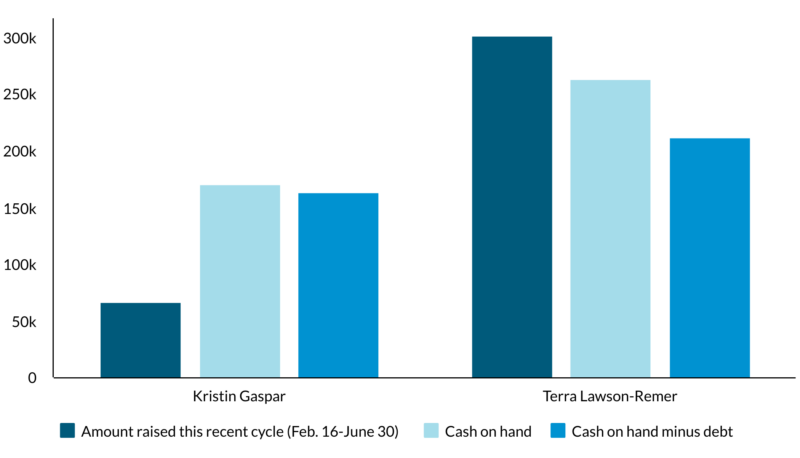 She has loaned her campaign some money, and the graph below includes $20,000 she contributed. And because of her intense spending, she has a lot less cash on hand. But she raised more money from individual contributors than any other campaign in the region besides Ammar Campa-Najjar’s congressional campaign.

It is probably not a coincidence that Gloria released a poll this week showing how much further ahead his pollster has him. After Bry’s dominant fundraising performance, he risked losing his frontrunner status, and could have seen releasing the poll as a way to reclaim the narrative. 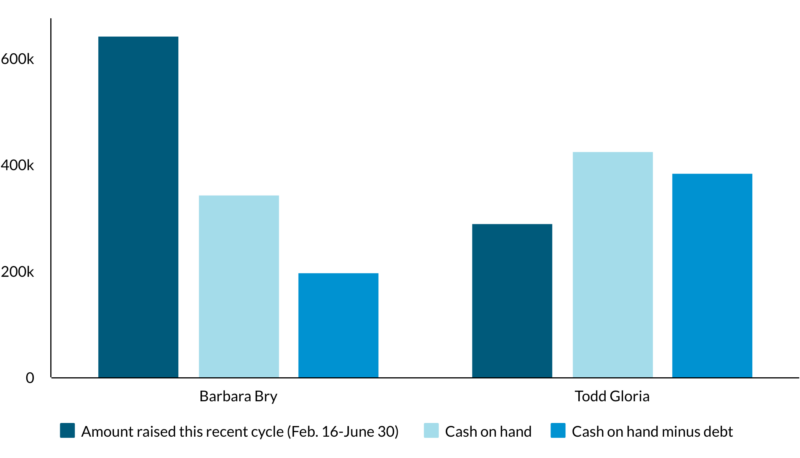 Will Moore trailed in fundraising to Joe LaCava but his personal loans to the campaign have given him a cash-on-hand advantage. 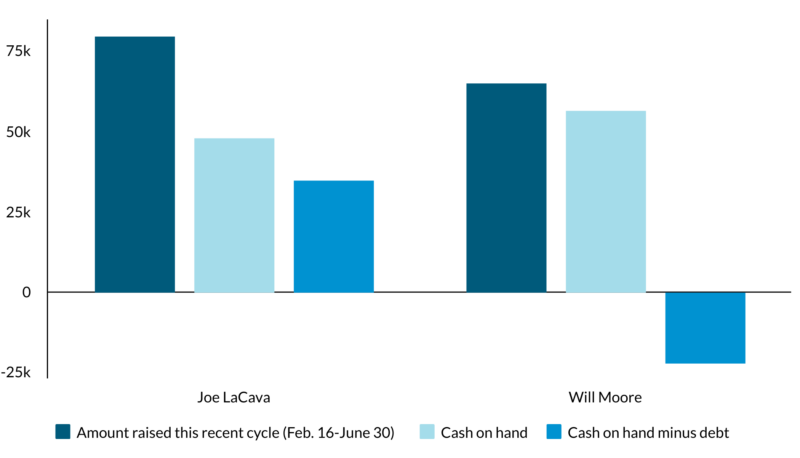 Stephen Whitburn ran in 2008 and lost to Gloria after dropping a lot of personal wealth into the race. Not this time. Whitburn more than tripled the fundraising haul of his rival Toni Duran, and he has significantly more left to spend without putting much of his own money at stake. 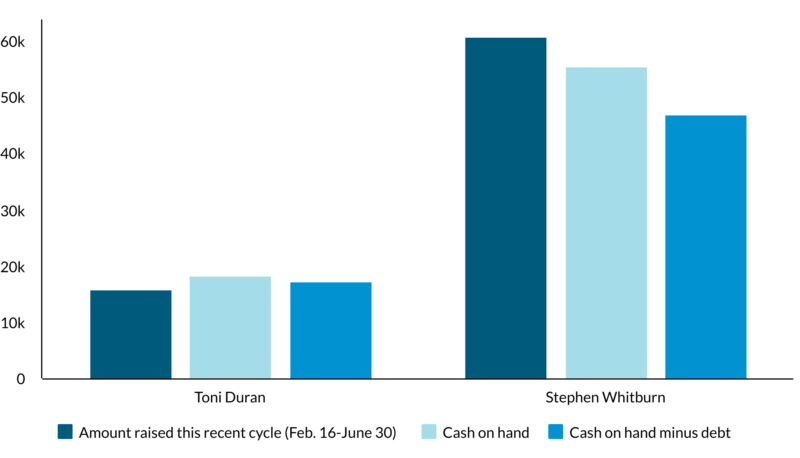 Republican Joe Leventhal has an advantage over Democrat Marni Von Wilpert with more cash on hand, but she raised more in the last period and the district no longer has a Republican plurality of registered voters. 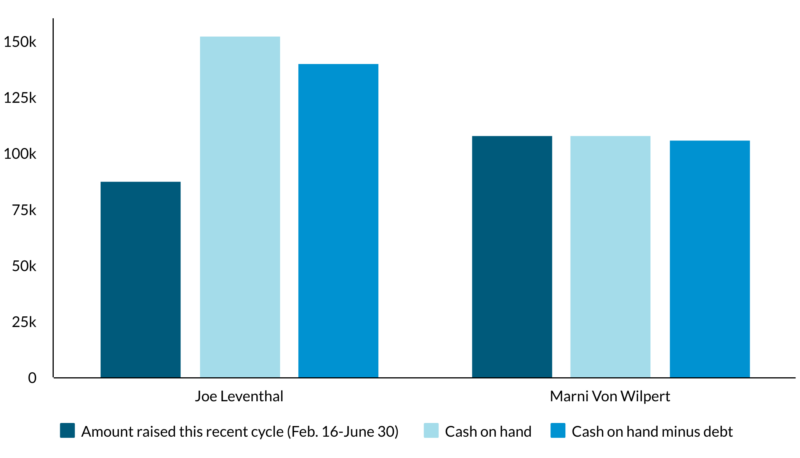 Republican Noli Zosa is also a Republican and a small business owner grappling with the pandemic’s associated economic crisis, but he did fundraise. He raised more than $118,000, well more than double his rival, Democrat Raul Campillo. Campillo had distinguished himself in part because of his successful fundraising in the primary.

Now Zosa has a decided advantage at least with resources. But Campillo will benefit from the Democratic Party’s support and the registration advantage Democrats have in the district, and the lift they receive from high turnout in general elections. 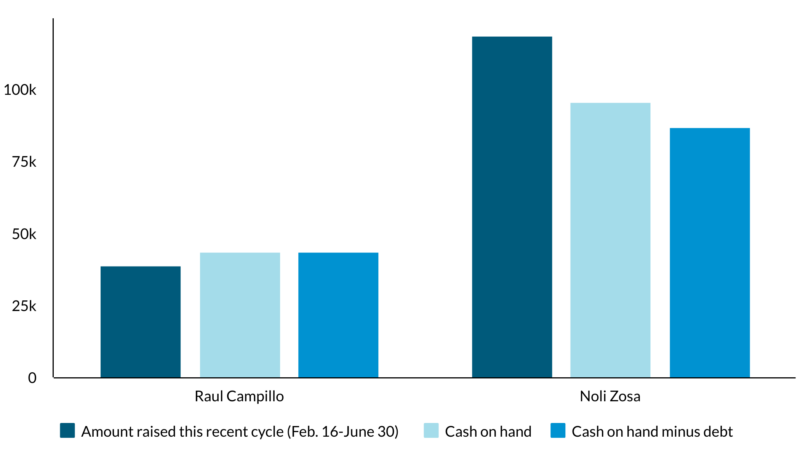 Kelvin Barrios just got former Councilwoman Marti Emerald’s endorsement. She was the first one to represent the then-newly created 9th City Council District. Sean Elo raised much less but has a comparable amount to spend. 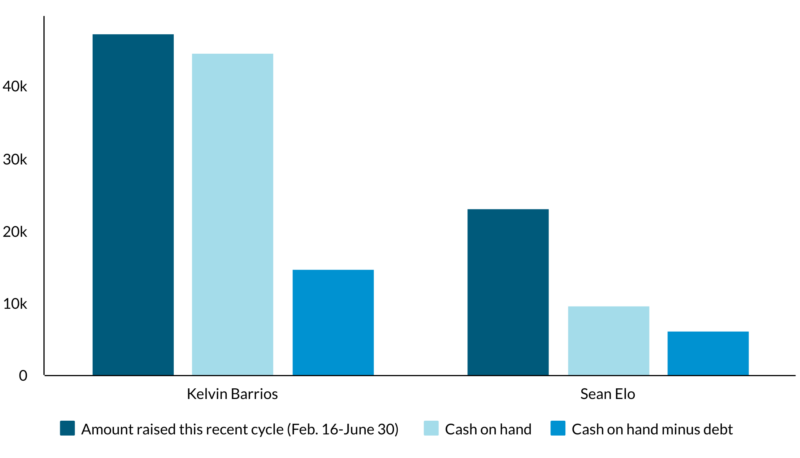 This is California’s most conservative Congressional district and the Republican is not under indictment, unlike in 2018. But Democrat Ammar Campa-Najjar continues to raise big dollars. He almost matched former Rep. Darrell Issa’s fundraising in the last period and he has more cash on hand to spend, even when you consider the millions Issa has personally put into his campaign.

But Issa has a lot more personal wealth where that comes from, and has a major advantage going into November. 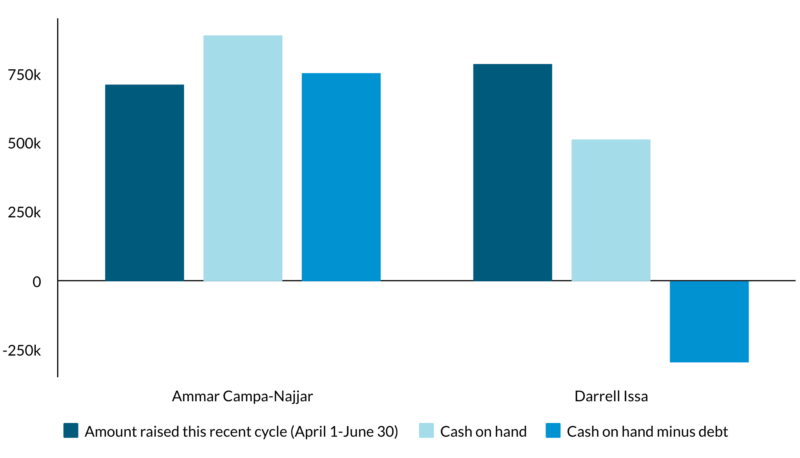 Georgette Gómez and Sara Jacobs almost perfectly matched each other in fundraising this period. 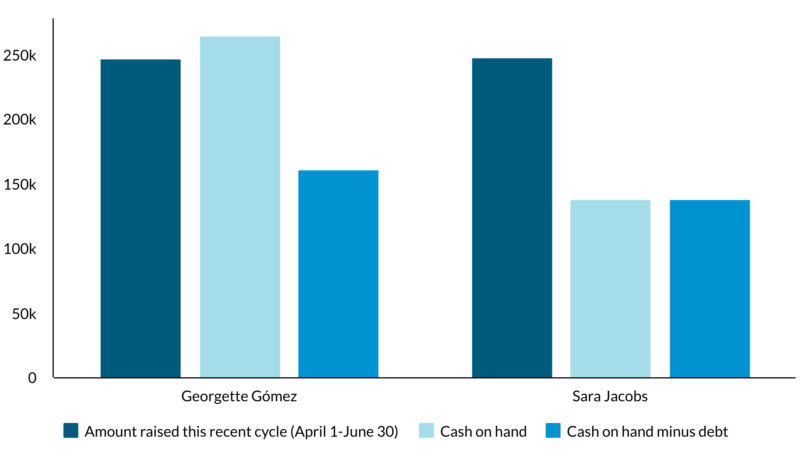 What the Campaign Reports Don’t Show

One thing that isn’t reflected in candidate campaign reports is the role of third-party political action committees, which can spend hefty sums on candidates’ behalf and which we know will play a major role in particular races.

But something to consider is the extent to which a candidate’s fundraising results alter a PAC’s decision-making.

With Gaspar’s low fundraising total, for instance, the conservative Lincoln Club that supports her might consider picking up the slack to help her stay competitive.

As long as the Lincoln Club has some upper limit on what it can spend this cycle, whatever extra money it spends to fill the hole Gaspar is in represents money it can’t spend on its other priorities, which right now include Bry, Zosa and Leventhal.

The above graphs also don’t tell us anything about how much money Gloria or other candidates endorsed by the Democratic Party have raised into the party to spend on their behalf when talking to registered Democrats, or how much different labor groups will spend on these races based on their own priorities.

Fifteen months ago, Ikhrata promised to scrap the system of freeways, light rail and buses the region had been iterating for decades, for a new network of fast trains and demand-controlled freeways to lower emissions and make transit as fast as driving.

He and North County leaders have feuded over the idea since then, and we’ll see next Friday when Ikhrata presents it to the full board how pronounced that political dispute will be. The plan itself won’t be adopted until late next year.

We’ll dive deep into the plan in the months ahead, but here’s some big-picture takeaways for now.

Paying for that, Ikhrata told me, would require a one cent countywide sales tax with no sunset. Right now, county residents pay half-cent sales tax that expires in 2048.

“We don’t have the model run on this version, but from everything we’ve seen we think it will beat it, at a cost of $177 billion,” Ikhrata said, referring to the agency’s analytical tools that project how changed traveling behaviors in a given system translate to greenhouse gas reductions. “We don’t know the answer to that question exactly about the state goals, but we won’t put out a plan that doesn’t exceed the mandate.”

Megan Wood, who does a lot of different things for Voice of San Diego, was the one who built those graphs. She’s great. If you have any feedback for the Politics Report, send it to scott.lewis@voiceofsandiego.org or andrew.keatts@voiceofsandiego.org.