Pompeo has lost confidence at State amid impeachment probe – CNN

Details of the inner workings of the Department have emerged this week after House Democrats conducting the impeachment probe began releasing the full testimony of senior State officials, including the ousted former ambassador to Ukraine. Those details have put a spotlight on Pompeo’s role in the unfolding impeachment drama and compounded concerns inside the Department that he has prioritized his relationship with President Donald Trump over the well-being of his own staff.

One senior administration official who has been a consistent defender of Pompeo told CNN that conditions within the Department have gotten significantly worse since the start of the impeachment inquiry.

“Morale in the building is always bad, but this is different,” said the official. “I think part of it is Ukraine, it is a game changer.”

When asked for a State Department response, a senior official pushed back on that characterization.

“This is complete nonsense,” the official said. “Everybody in the department is concerned about the political situation in Washington because we are citizens, and we are citizens with a special interest in foreign policy. That is clearly true. But that is different from saying that there is a plummeting morale.”

The release on Monday of testimony from former US ambassador to Ukraine Marie Yovanovitch and Michael McKinley, the former senior adviser to Pompeo, were damaging to Pompeo internally, said this official.

Yovanovitch, for instance, testified that as allies of Trump (including his lawyer, Rudy Giuliani) were publicly attacking her and calling for her removal, she pushed the Department to speak up and defend her. But Yovanovitch’s requests went unanswered, furthering concerns that Pompeo would not defend other foreign service officials who became targets of the President and his friends.

Asked by congressional investigators if she felt threatened by the President, Yovanovitch testified that she did.

Other parts of the sworn testimony have contradicted Pompeo’s public statements. McKinley testified that he raised the idea of putting out a statement of support for Yovanovitch directly with Pompeo three times and the Secretary did nothing substantive to respond.

The State Department did not reply when asked if Pompeo wanted to revise what he had said.

There are now fears inside the State Department that the White House may review the transcripts and look for ways to criticize those officials who did testify, two current State officials told CNN.

“We are increasingly worried about backlash against career officials,” one State official said. “Especially if Trump wins in 2020, or if Secretary Pompeo stays on as Secretary of State.”

On Wednesday morning Pompeo departed Washington for a trip to Germany. Ulrich Brechbuhl, Pompeo’s top advisor and West Point classmate, defied a subpoena to appear before Congress as part of the impeachment inquiry today. He is traveling with Pompeo instead.

After leading the CIA, Mike Pompeo took over a demoralized State Department in April 2018.

When Pompeo took over as Secretary in April 2018, hopes were high within the Department that he would improve conditions left by his predecessor, Rex Tillerson, who had clashed with the foreign service professionals and sought to gut the Department’s budget. Officials were encouraged by Pompeo’s close relationship with the President, and some felt that he would use his access to Trump to protect the broader interests of the Department and its personnel who felt undermined by Tillerson.

Things did improve during the first year of Pompeo’s tenure. Part of what makes his recent behavior so confounding, says the senior administration official with knowledge, is that Pompeo improved morale as the Director of CIA, and had done the same after initially taking over from Tillerson.

“He was great at CIA and he is great when he is overseas and meets with embassy staff,” the official said. “[He] greets staff, spouses, gives a pep talk. Fabulous. He doesn’t get credit for that.”

McKinley testified to Congress last month he was relieved that Pompeo had restored much of the process that had been scuttled under Tillerson.

Michael McKinley, a former State Department adviser, arrives to the deposition related to the House’s impeachment inquiry in the Capitol Visitor Center on Wednesday, Oct. 16, 2019.

“He does deserve credit for rebuilding the institution, processes, creating opportunities, and, frankly, ambitions for the Foreign Service,” McKinley said.

Not everyone in Foggy Bottom has soured on Pompeo. David Hale, one of Pompeo’s senior advisors who is a career foreign service officer, is expected to tell lawmakers during his testimony on Wednesday that Pompeo was reluctant to defend Yovanovitch because it would hurt efforts to get Ukraine military aid, according to the Associated Press.

A senior State Department official did not agree with those who have expressed a need for a Pompeo statement supporting Yovanovtich, saying that kind of statement would be “odd” if Pompeo wants to continue being an “effective member of the cabinet.”

On Tuesday at a public diplomacy event where Pompeo spoke to foreign based public affairs officers, he received a standing ovation twice, a State Department official told CNN.

But over the past several months, tensions have arisen between Pompeo and the career staff. From the beginning, Pompeo has chafed at the Department’s penchant for leaks to the press and has bristled at the more independent-minded diplomats. His management style has remained brusque, current State Department officials say.

Frustrations built up after what officials say was a failure to address “disrespectful and hostile treatment” identified in a report by the State Department inspector general. Pompeo’s constant dalliances with a potential run for Senate in Kansas in 2020 have also confounded people in the building.

Internal tension at State has intensified as the Ukraine saga has unfolded. Beginning with the forced removal in May of Yovanovitch from her post in Kiev, coupled with the lack of a response from Pompeo, confidence in the secretary waned as many State officials worried that Pompeo’s access to Trump had only protected himself.

The growing animosity toward Pompeo extends outside the building to the Department’s extensive alumni network. The Yovanovitch episode prompted a bipartisan group of 27 former foreign service and high-ranking national security officials to write a letter to Pompeo in October defending Yovanovitch against attacks by Trump and his allies. The former officials also called on Pompeo to “unequivocally” condemn those attacks.

One of the signatories was Eric Edelman, a career foreign service officer who served as a US ambassador under both Bill Clinton and George W. Bush. Edelman told CNN that Pompeo has diminished his credibility within the Department and around the world by aligning himself so closely and publicly with Trump, putting him at odds with Pompeo’s own team of officials.

“Pompeo was able to suck up to Trump in private as CIA director. But the sucking up as secretary of state had to go on in public,” Edelman said.

The overarching worry within the Department and elsewhere in the administration is Pompeo’s close relationship with Trump — with one State official calling the Secretary a “yes man” for the President. A former White House official referred to Pompeo as a “sycophant” who challenges Trump even less than Vice President Mike Pence.

“In private, Pence will actually push the President harder,” said the former White House official. “The other problem is that he [Pompeo] elects not to use his strength. When he does, it is positive, he is there, but only on the margins. I don’t know if he lacks the courage, or if it is a political calculation.”

There are even concerns that Pompeo’s appeasement of Trump hasn’t given him the ability to guide the President in a responsible direction — and that Pompeo has only enabled Trump’s problematic behavior.

“He talks to the President more than most people, and he tries to be a force for good. But I don’t think he [Trump] takes a whole lot of guidance from Mike,” said the former White House official.

The State Department did not respond to a request for comment.

An additional source of consternation within the Department, say multiple people familiar, is with what the Secretary may decide to do next: run for Senate in his home state of Kansas.

Originally elected to the House of Representatives in 2010 from a Wichita-based district, Pompeo has been signaling his interest in succeeding retiring Republican Sen. Pat Roberts. In 2019 so far, he has taken four visits (including three official State trips) to Kansas. He has also done 7 interviews with local radio and newspapers in the past two weeks.

Pompeo has publicly downplayed the possibility he would run, but his activities in Kansas have prompted scrutiny from the local press. In an October 24 interview with the Wichita Eagle and Kansas City Star, Pompeo refused to answer questions about the impeachment inquiry and characterized a question about the administration’s treatment of the Kurds in Syria as “insane.”

An October 25 editorial from the Kansas City Star was harsh. “Mike Pompeo, either quit and run for U.S. Senate in Kansas or focus on your day job,” the headline read.

According to two State officials, some in the Department are expressing hope that Pompeo does leave to run for the Senate. Their wish is, in part, driven by fears that if he stayed Pompeo might enable a retaliation effort against diplomats who cooperated with the impeachment inquiry. Some are whispering in the hallways at State about who could be next to fill Pompeo’s shoes, those two officials said.

US allies also have the sense that Pompeo could be preparing to leave State in the coming months. Last month, diplomats from a close ally met with their US counterparts at the State Department. A source familiar with the meeting said that normally the two countries coordinate on plans well into the future. This time, however, the senior US officials would not discuss anything past the end of the new year, though nothing was explicitly said about Pompeo leaving.

These jaunts to Kansas have also caught the attention of political allies outside the building, and not in a good way. One congressional aide said there’s been a noticeable proliferation of press releases highlighting Pompeo’s local radio interviews.

One senior Republican on the Hill told CNN Pompeo must be getting “bad advice.”

“He should not be doing interviews if he doesn’t know what to say [about impeachment],” said that Republican. “And since we don’t know what is going on, it makes it even worse.”

Another senior Republican, with knowledge of Pompeo’s activities in the last few months, said the Secretary has been a “total disaster” in these interviews in the local press.

“I don’t understand it. He should not be running to Kansas every other week,” said this Republican, who summed up the last few months for Pompeo: 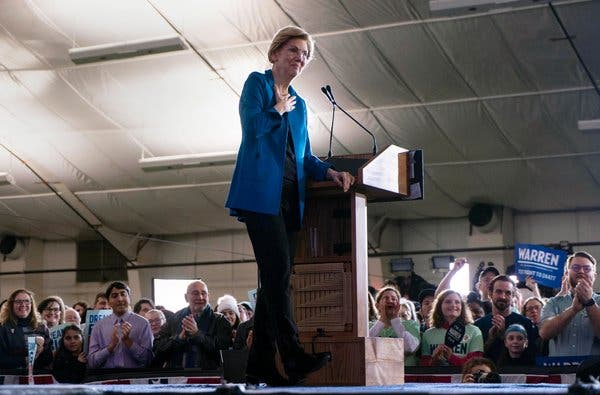 After New Hampshire, What Comes Next for Elizabeth Warren? – The New York Times 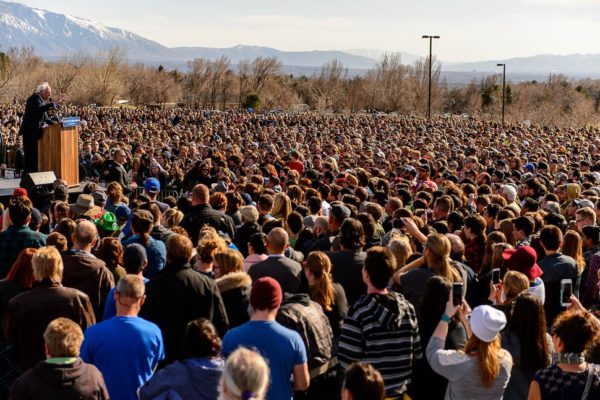