Republican operative Roger Stone was found guilty Friday of all seven counts against him, including witness tampering and making false statements.

Prosecutors portrayed Stone, 67, as a serial liar who tried to bully witnesses into not cooperating with authorities. They charged Stone, a confidant of President Donald Trump, with making false statements, obstruction and witness tampering in a case that was an offshoot of special counsel Robert Mueller’s Russia investigation.

Stone is the sixth Trump aide or adviser to be convicted of charges brought as part of Mueller’s probe.

His sentencing was set for Feb. 6, and he faces up to 20 years in prison. The jury deliberated for two days.

Trump tweeted shortly after the verdict was announced, asking “what about” Hillary Clinton, James Comey, House Intelligence Committee Chair Adam Schiff and others. “Didn’t they lie?”

The colorful trial in Washington lasted nearly two weeks and featured references to “The Godfather Part II,” threats of dognapping, complaints of food poisoning and a gag order.

Stone was arrested in January in an early morning FBI raid and charged with misleading the House Intelligence Committee in 2017 about his efforts to find out when WikiLeaks would be releasing emails hacked from the Democratic Party and Clinton’s 2016 presidential campaign.

The prosecution rested its case on Tuesday with the testimony of former FBI agent Michelle Taylor. She was recalled to testify about Stone’s testimony to the Intelligence Committee, specifically when he told the panel about his thoughts on the potential connection between Guccifer 2.0 and the Russian government.

Bannon told jurors he saw Stone as “an access point” to WikiLeaks.

Gates testified that it was his understanding that Stone had inside, nonpublic information into WikiLeaks’ operation and that the campaign acted on it.

After the DNC announced it had been hacked and WikiLeaks planned a news conference, the campaign had “brainstorming” sessions about what to do with the information. Gates said that the Trump campaign chairman at the time, Paul Manafort, who was convicted earlier this year in the Mueller probe, told him he would update Trump with any information that he could get from Stone.

The jury also saw an email between Gates and Stone after the DNC announced it had been hacked. In it, Stone asks for Trump son-in-law and senior adviser Jared Kushner’s contact information.

In late July 2016, Gates testified, he was in the car when Trump received a phone call from Stone. After the call, Trump told Gates that “more information would be coming” about WikiLeaks.

“This is a bigger message about truth,” Mimi Rocah, former assistant U.S. attorney for the Southern District of New York and MSNBC legal analyst, said of the guilty verdict. “The public has been seeing people lying so brazenly for so long and the jury saying facts still matter is a big deal.”

Stone, a Trump confidant for more than 30 years and self-described “dirty trickster,” has been a well-known Republican operative dating to President Richard Nixon’s campaign. Stone also served early on as an adviser to Trump’s 2016 campaign and has called the case against him politically motivated.

Stone did not testify in his trial, but his defense team played a 50-minute clip of his Intelligence Committee testimony for the jury, claiming the prosecution did not prove its case. Stone had denied knowing about the WikiLeaks’ releases of hacked emails ahead of time.

Joyce Vance, a former U.S. attorney and an NBC/MSNBC legal analyst, said in cases like Stone’s it is unlikely the sentence would be close to a 20-year sentence.

“The guidelines are significantly lower than the statutory maximum. For example, the witness intimidation crime is a 20-year statutory maximum. Sentences for white-collar crimes are typically very short, especially someone convicted of a first offence,” she said. “People convicted of white-collar crimes could easily end up with zero to six months. They typically serve their sentences in minimum-security facilities. But this is Roger Stone so we don’t know exactly what will happen.”

Prosecutors, who had Stone’s emails and texts, said he pressured Randy Credico, a radio talk show host and former comedian, to lie about being an intermediary between him and WikiLeaks’ founder Julian Assange.

“Stonewall it. Plead the fifth,” Stone texted him in November 2017. Stone also called a Credico a “rat” and a “stoolie” in a threatening April 2018 email.

“My lawyers are dying to rip you to shreds. I’m going to take that dog away from you,” he said in the email, which Credico read aloud in court.

Stone also urged Credico to emulate a character from “The Godfather Part II,” Frank Pentangeli, who recants his testimony to Congress about mob boss Michael Corleone after being intimidated. Prosecutors sought permission to show a clip from the movie, but the judge declined to allow it and informed the jury to not watch the movie.

The trial that promised to be a circus lived up to expectations. Right-wing provocateur Milo Yiannopoulos attended every day, telling reporters that he’s writing a book about it. Yiannopoulos often took lunch breaks with Stone and his legal team in the courtroom cafeteria.

A 20-foot-tall inflatable rat with Trump hair was stationed at the front entrance of the courthouse. Explicative-laden communications between Stone and Credico were often read aloud in court. Credico attempted a Bernie Sanders impression while testifying, something that Judge Amy Berman Jackson shot down.

“I know you’re a comedian, but this is serious business,” she said. 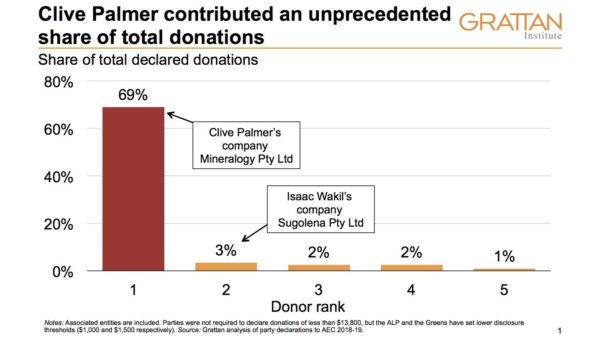