Secretary of State: All Michigan voters will get absentee ballot applications at home – Detroit Free Press

Secretary of State Jocelyn Benson said Tuesday all of Michigan’s 7.7 million registered voters will be mailed absentee ballot applications so they can take part in elections in August and November without the risk of in-person voting if they choose to do so.

Benson, in a move likely to anger some Republicans and potentially lead to a court battle, said the threat posed by the spread of coronavirus, which has already killed 4,915 Michiganders since March but has been on the decline in recent weeks, is still too great to consider having people go en masse to the polls to vote in the Aug. 4 and Nov. 3 elections. Benson is a Democrat.

“By mailing applications we have ensured that no Michigander has to choose between their health and their right to vote,” Benson said. She noted that in 50 local elections held across the state on May 5, turnout was up significantly from other years and that the vast majority of voters cast absentee ballots by mail or through a drop box.

“We know from the elections that took place this month that during the pandemic Michiganders want to safely vote,” she said.

But some Republicans, including President Donald Trump, who won Michigan by less than two-tenths of 1% of the vote four years ago and is up for reelection in November, have argued against widespread voting by mail.

On April 8, Trump posted on Twitter, “Republicans should fight very hard when it comes to state wide mail-in voting. Democrats are clamoring for it. Tremendous potential for voter fraud, and for whatever reason, (it) doesn’t work out well for Republicans.”

In fact, there is no indication of widespread fraud involving mail-in ballots and many Democrats have argued that Republicans oppose it only because it makes it easier for Democratic-supporters to vote. Meanwhile, several commentators noted that Trump himself has voted absentee in New York, where he used to live, and this year in Florida, where he officially lives now.

Michigan holds its partisan primary election Aug. 4 for offices other than president; the national general election is Nov. 3.

Still, Benson could face a legal challenge, despite the fact that she and some local clerks sent out unsolicited absentee ballots to voters for the May 5 local elections.

While Michigan changed its rules two years ago to allow anyone to vote by absentee ballot for any reason — a change which helped increase absentee voting in the March 10 presidential primary from 18% four years ago to 38% this year — it’s possible an argument may be made the May 5 election was disrupted by the coronavirus pandemic and Gov. Gretchen Whitmer’s stay-at-home order to contain it.

It’s not at all clear that, come August or November, the threat may be as pronounced or that Whitmer’s orders, which are being challenged in court, will still be in place. As recently as Monday Whitmer moved to allow some retails businesses, including bars and restaurants in northern Michigan, to begin opening with restrictions this Friday because cases weren’t as severe there.

Also, is it possible opponents of such a move could try to use past legal decisions, like a 2008 Michigan Court of Appeals decision involving the Macomb County clerk, that ruled against her sending absentee ballot applications to every voter over the age of 60.

While that ruling centered on a local clerk, not the Michigan Secretary of State’s Office, it did say that part of the reason she could not send the ballot applications was because election law is expressly under the Legislature’s control and “the power to mail unsolicited ballot applications to qualified voters is not expressly stated anywhere in (the) statute.”

Benson said there was no reason not to send applications to every Michigan voter, giving them the ability to vote by mail. “Voting by mail is easy, convenient, safe and secure,” she said, “and every voter in Michigan has the right to do it.”

A Michigan group, Voters Not Politicians, which advocates for increased voter participation, said while Benson’s action helps, it would prefer the Republican-controlled state Legislature go even further.

“The Legislature has the power to authorize sending absentee ballots – not applications – to voters,” said Nancy Wang, the group’s executive director. “Automatically sending ballots with pre-paid return postage will cut the red tape, save money and empower all Michiganders to vote safely in this year’s elections.” endnu

Sending an application doesn’t guarantee a ballot, but encourages people to vote

Sending people absentee ballot applications doesn’t automatically guarantee them a ballot: They still would have to fill out the application — which is also available for download at www.Michigan.gov/Vote — and either stamp and mail it to their clerk, drop it off, or take a photo of it and email it to their local clerk’s office.

Benson said when applications are sent to voters they will include contact information for the local clerk.

According to Benson, about 1.3 million voters are already on permanent absent voter list, meaning their local election clerks mail them applications ahead of every election.

Additionally, she said some jurisdictions are already mailing applications to all local registered voters. She said by ensuring that all other remaining voters receive an application, it will save people from having to go in to their clerk’s office and ask for one. If a person goes in person to fill out an absentee ballot application, he or she is required to show a photo ID or sign an affidavit as to his or her identity in order to leave with a ballot — which is not required for mailed or dropped-off applications.

“We appreciate that some clerks are proactively protecting public health by mailing applications to all their registered voters, and we are fulfilling our responsibility to provide all voters equal access,” Benson said.

Under state law, clerks check the signature on the application with the one in the voter file and, if they match, issue an absentee ballot, sending it to the voter. Applications for ballots to be sent by mail to the voter must be received by the local clerk’s office by 5 p.m. the Friday before the election.

Benson said people could also go to www.Michigan.gov/Vote and register to be on the permanent absent voter list, so they always have the option to vote by mail.

“The vast majority of voters across the political spectrum want the option to vote by mail,” she said. “Mailing applications to all registered voters is one of the ways that we are ensuring Michigan’s elections will continue to be safe, accurate and secure.”

The Detroit Free Press is on guard with breaking news, tips and analysis to help you through this crisis. But we need your help. Please subscribe to support Free Press journalists who are reporting on the coronavirus. Or you can make a tax-deductible contribution to the nonprofit Report for America to help us put new reporters on the ground in metro Detroit. 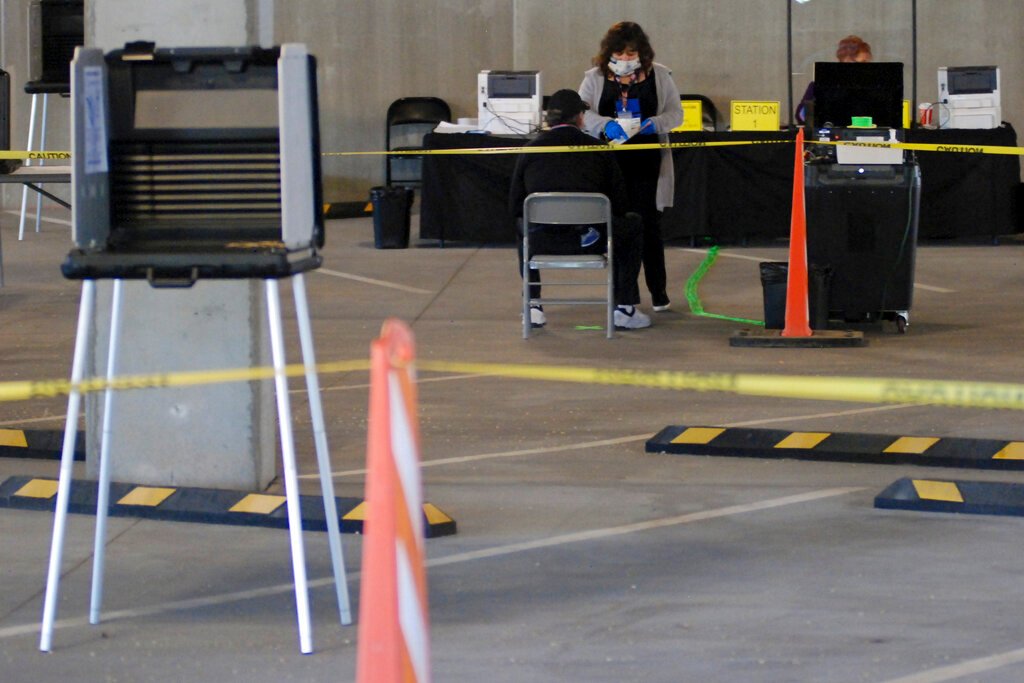