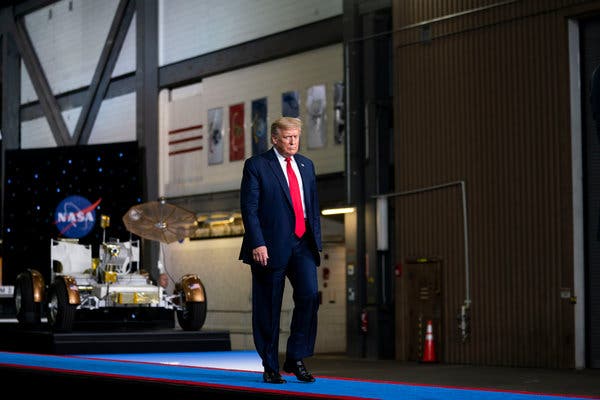 President Trump is facing the bleakest outlook for his re-election bid so far, with his polling numbers plunging in both public and private surveys and his campaign beginning to worry about his standing in states like Ohio and Iowa that he carried by wide margins four years ago.

The Trump campaign has recently undertaken a multimillion-dollar advertising effort in those two states as well as Arizona in hopes of improving his standing, while also shaking up his political operation and turning new attention to states like Georgia that were once considered reliably Republican. In private, Mr. Trump has expressed concern that his campaign is not battle-ready for the general election, while Republicans are concerned about whether the president can emerge in a strong position from the national crises battering the country.

Mr. Trump has been consistently unpopular as president with a majority of Americans; his advisers have long seen his effort to win a new term as depending on the loyalty of his conservative base and the Republican-friendly tilt of the Electoral College — factors that could allow the president to capture another thin victory despite the strong possibility of losing the popular vote again.

But amid the human and economic devastation of the coronavirus pandemic and now a wave of demonstrations and social unrest in American cities, Mr. Trump has fallen significantly behind his Democratic challenger, Joseph R. Biden Jr.

In private polling conducted by Mr. Trump’s campaign, the president is now well behind Mr. Biden, according to people briefed on the most recent round of results. Multiple public surveys this week have found Mr. Trump trailing Mr. Biden, the former vice president, by double-digit margins, including a Monmouth University poll published on Wednesday that showed Mr. Biden ahead by 11 percentage points.

The presidential election is still five months away and Mr. Trump, despite his political vulnerability, retains some important assets as a candidate. While Mr. Biden’s fund-raising efforts have picked up momentum, Mr. Trump is sitting on a considerably larger war chest and is resuming in-person fund-raising next week. There is almost no open dissent within the Republican Party, giving Mr. Trump a solid political foundation on the right from which he can attempt to rebuild his strength before the fall campaign.

Tim Murtaugh, a spokesman for Mr. Trump’s campaign, said in a statement that the race remained highly competitive.

“Our internal data consistently shows the president running strong against a defined Joe Biden in all of our key states,” Mr. Murtaugh said, using a term that typically refers to polling that tests positive and negative messages about both candidates.

But Mr. Trump’s belligerent response to protests after the killing of George Floyd, a black man, while in the custody of white police officers in Minneapolis, appears to have worsened his political position even further, officials in both parties said. On an almost daily basis, he has issued a combination of wild threats and complaints about news media coverage and other personal grievances.

“There is no obvious strategy in terms of message,” said Rob Stutzman, a Republican strategist based in California. “The president defaults to base messages regardless of strategy, thus the campaign becomes a base-driven campaign.”

Signs of anxiety inside the Trump team are evident across the electoral map. Over the past few weeks, the president’s operation has spent about $1.7 million on advertising in just three states he carried in 2016 — Ohio, Iowa and Arizona — that it had hoped would not be competitive at all this year. Much of that sum went to a concentrated two-week barrage in Ohio, according to the media-tracking firm Advertising Analytics.

The spending in Ohio startled many Republicans, given that four years ago Mr. Trump defeated Hillary Clinton there by eight percentage points.

Perhaps just as telling were two trips last month to Georgia by Vice President Mike Pence. The state has become a source of nagging concern to Republicans, both because of the stakes in the presidential race and because there are two Senate seats up for election this year, including one held by a highly unpopular appointee, Senator Kelly Loeffler, who has been snared in a personal financial scandal.

The fact that any of those states is competitive at this point looms as a significant hurdle to Mr. Trump’s re-election. Should he lose a state like Georgia, with its 16 Electoral College votes, or Arizona, with 11, it could blow a hole in Mr. Trump’s map even if he were to hold other battleground states like Florida, North Carolina and Wisconsin.

A set of state-level polls released on Wednesday by Fox News found Mr. Biden leading Mr. Trump in Arizona by four percentage points, and slightly ahead of Mr. Trump in Ohio as well. The former vice president held a nine-point lead in Wisconsin, where Mr. Trump eked out a win over Mrs. Clinton in 2016.

Aaron Pickrell, a Democratic strategist in Ohio who helped steer former President Barack Obama’s campaigns there, said Mr. Trump’s decision to shift money into the state suggested just how precarious his overall position was. Mr. Pickrell said there were now conversations among national Democrats about whether to commit resources to contesting a state that most effectively gave up on after Mrs. Clinton’s thumping defeat there.

“I don’t think anybody will dispute the fact that if Trump loses Ohio, there’s no path at all,” Mr. Pickrell said. “We’re not going to be a tipping-point state this time, but I think Joe Biden can win here and I think the Trump campaign sees that.”

Polls released on Wednesday show another troubling sign for Mr. Trump: His numbers have flagged recently among white voters, driven by a continued erosion of support from those with college degrees. The latest Monmouth survey found Mr. Trump with the support of just 52 percent of white voters nationwide — five percentage points lower than his share in 2016, according to exit polls.

There are also at least faint signs of renewed discomfort with Mr. Trump among a sliver of suburban Republican primary voters who could doom him altogether if they were to shift to Mr. Biden in November.

In a few states with primary elections this week, a smattering of suburban counties registered substantial, though far from strong, protest votes against the president from his fellow Republicans.

In Maryland, for instance, more than a tenth of Republican primary voters cast their ballots for Bill Weld, the former governor of Massachusetts who ended his quixotic campaign in March after registering in the low single digits in a string of primaries. With most precincts reporting, Mr. Weld was drawing more than 20 percent of the primary vote in two populous and diverse suburban counties outside Washington, D.C., that are rich with racially diverse and highly educated voters who have grown increasingly uncomfortable with the G.O.P. under Mr. Trump.

In Indiana, Mr. Weld took nearly 13 percent of the vote in Hamilton County, a suburb of Indianapolis, while in New Mexico a similar share of voters in Bernalillo County, home to Albuquerque, voted for an uncommitted slate of Republican delegates rather than for Mr. Trump.

In many of the states that voted on Tuesday, however, including Pennsylvania and Montana, there were only scant signs of protest voting, underscoring the extent of Mr. Trump’s dominance within his party even in a period of extraordinary political adversity. And his advisers point to the relatively high turnout on the Republican side in some states, like New Mexico, as a sign that Mr. Trump’s base is still intensely engaged.

It is not clear how fully Mr. Trump grasps the depths of his political peril; when he was asked on Wednesday about trailing Mr. Biden in the polls, he replied, “I have other polls where I’m winning,” though he did not cite one. At times, his allies have taken unusual steps to try to calm his frustration, including commissioning and then leaking a poll last month that suggested that Mr. Trump had gained ground rapidly on Mr. Biden, people familiar with the efforts said, even as other Republican and nonpartisan polling showed the president’s numbers stagnant.

But Mr. Trump has been lashing out for weeks at some of his political lieutenants, according to people briefed on his reactions, who were not authorized to speak publicly. He blamed them for the difficulty of the campaign, comparing them unfavorably to the operation surrounding Mr. Biden. The president has complained that his fund-raising advantage has diminished, and indeed some of Mr. Trump’s advisers were caught off guard when Mr. Biden raised nearly as much money as the president in April.

“Biden has a team of killers and all I’ve got is a defense,” Mr. Trump has said to allies, taking a decidedly different view of the Biden campaign than most Republicans as well as a good number of Democrats.

Mr. Trump’s campaign has already carried out an organizational shake-up, elevating a trusted adviser, Bill Stepien, to the role of deputy campaign manager and giving him an expansive portfolio. The move came after Mr. Trump spent much of the spring railing bitterly about his campaign manager, Brad Parscale, and other Republicans raised questions about whether Mr. Parscale had sufficient political experience and knowledge to steer a presidential campaign.

Mr. Parscale’s job is safe, several officials insisted, but other changes on the campaign could happen in the coming weeks, according to people close to Mr. Trump.

Across the Republican Party, there is a mood of intense apprehension and hope — though not optimism — that Mr. Trump can stabilize his candidacy and rebuild his political position as he did after several political crises in 2016.

But Republicans also acknowledge that Mr. Trump has seldom, if ever, faced a moment as difficult as this one, for the country or for his campaign, especially given his erratic handling of the twin crises facing the country.

Like many Republicans, including top officials in Mr. Trump’s campaign and administration, Mr. Stutzman, the strategist, saw the president’s impulses as a largely unfixable problem: “He’s too defective to have any other strategy than to be who he is,” Mr. Stutzman said. 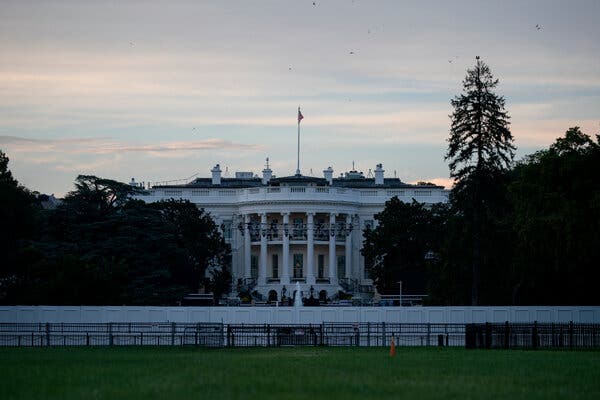 Radical Break From Tradition: Trump Stages Part of His Convention From the White House – The New York Times 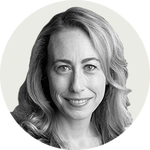