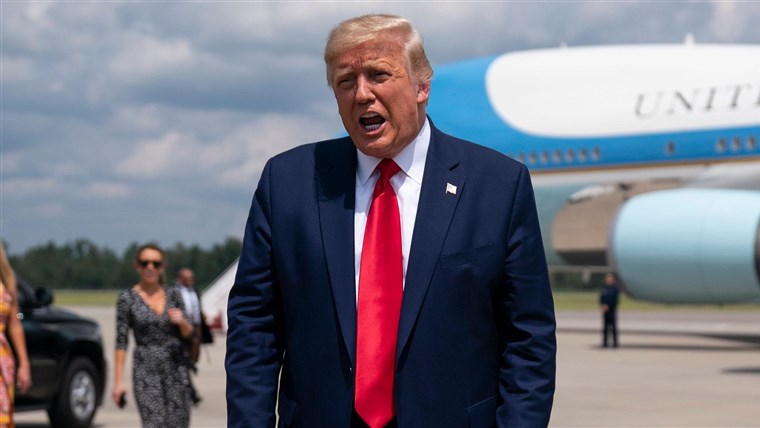 WASHINGTON — President Donald Trump suggested that people in North Carolina should vote twice in the November election, once by mail and once in person, escalating his attempts to cast confusion and doubt on the validity of the results.

“So let them send it in and let them go vote, and if their system’s as good as they say it is, then obviously they won’t be able to vote. If it isn’t tabulated, they’ll be able to vote,” Trump said when asked whether he has confidence in the mail-in system in North Carolina, a battleground state.

“If it’s as good as they say it is, then obviously they won’t be able to vote. If it isn’t tabulated, they’ll be able to vote. So that’s the way it is. And that’s what they should do,” he said.

It is illegal to vote more than once in an election.

Trump has made countless false statements about the security of voting by mail ahead of the election as much of the country braces for an increase of voters who opt for mail-in ballots during the coronavirus pandemic.

The Trump campaign and the Republican National Committee have sued states that have moved to expand access to mail-in voting in response to the pandemic, including Nevada, New Jersey and Montana.

“President Trump encourages supporters to vote absentee-by-mail early, and then show up in person at the polls or the local registrar to verify that their vote has already been counted,” Trump campaign official Tim Murtaugh said. “It’s amazing that the media can go from insisting that voter fraud doesn’t exist to screaming about it when President Trump points out the giant holes in the Democrats’ voting schemes.”

Despite Trump’s claims that mail-in ballots lead to widespread fraud that benefits Democrats, there is no clear evidence that suggests that either party gains an advantage with mail-in voting.

Trump and his wife, Melania Trump, requested absentee ballots to vote in the Florida primary this year.

A Washington Post analysis estimates that at least 83 percent of Americans are eligible to vote by mail this fall.

“I don’t like that,” Trump responded when a reporter told him that 600,000 voters in North Carolina could vote absentee.

Asked about Trump’s comments during an interview later Wednesday on CNN, Attorney General William Barr argued that a 2005 bipartisan report on election reform found that mail-in voting is “fraught with the risk of fraud and coercion.”

Asked why there have been no findings, however, of widespread fraud, Barr responded, “We haven’t had the kind of widespread use of mail-in ballots that’s being proposed.”

Barr said he was unaware of the specific laws in North Carolina, and he did not respond directly to questions about Trump’s earlier comments.

Trump made similar claims about mail-in ballots during his 2016 campaign, essentially encouraging his supporters to commit voter fraud.

At a rally in Colorado just days before he was elected, Trump told supporters to obtain new ballots because “do you think those [mail-in] ballots are properly counted?”

Lauren Egan is a reporter for NBC News based in Washington.