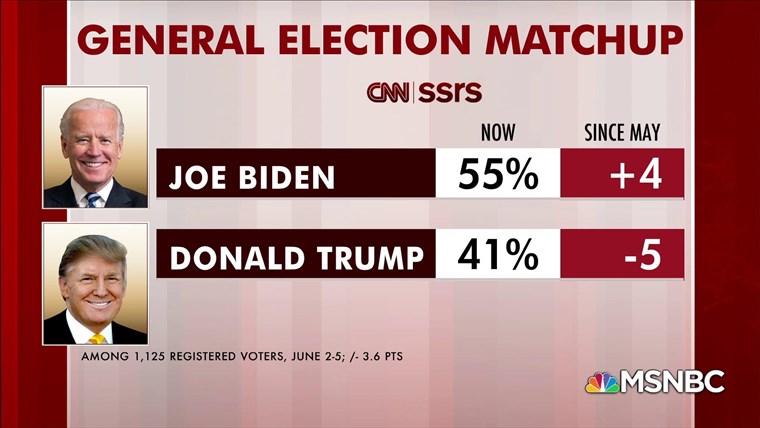 WASHINGTON — From behind new layers of fencing, President Donald Trump may hear no sign of trouble.

“We are doing really well,” Trump said Friday of a coronavirus pandemic that has killed more than 105,000 Americans.

The economy is turning around in a way that is “shocking to even great pros,” he added in a statement from the Rose Garden that drew on rosier-than-reality unemployment figures. The May jobs report made Friday a “great day” for George Floyd, who was killed by Minneapolis police last month, Trump said.

And on Sunday, the president said he was pulling National Guard troops out of Washington because he’d put down protests with a show of federal force.

Trump says he has everything under control: the disease, the economy and civil unrest. But 80 percent of Americans disagree, according to an NBC/Wall Street Journal poll released Sunday.

The contrast contributes to a sense that the president and his political team are tone deaf five months before voters decide whether to give him another four years in office, and it helps explain why his opponent, presumptive Democratic nominee Joe Biden, continues to lead him in key swing states.

There’s plenty of time for Trump to turn things around. Biden’s margins are hardly overwhelming where he’s ahead, and it’s possible that, by November, the president will be credited if the economy bounces back, coronavirus is contained and police reforms are put in place.

But Trump appears to have lost ground with a base that was narrow to begin with, and it’s not clear that he’s found an approach to attacking Biden that will convince swing voters in battleground states that his Democratic challenger is a riskier choice.

His campaign and the main super PAC supporting him have poured money into ads portraying Biden as soft on China, which may be helpful to House Republican challengers and Senate GOP incumbents who don’t have difficult votes to worry about. But Trump himself has a high-profile mixed record in dealings with China.

A person close to Trump said in a text message to NBC News that the emphasis on China by the president’s political team is “tone deaf” and “missing the moment(s)” at the center of the national discussion right now.

“It shows how tone deaf and insensitive he is,” Sharpton said.

What Trump has heard in recent days is a stinging rebuke from representatives of the military establishment he has draped himself in as a candidate and as president.

Trump’s decision to deploy federal agents to violently clear out a peaceful protest with tear gas, rubber bullets and smoke bombs so that he could take photos with the Bible at a church near the White House last Monday, and the use of military helicopters to harass protesters in other locations around the nation’s capital, drew sharp criticism from a bipartisan chorus of retired military officers and diplomats.

“There is no role for the U.S. military in dealing with American citizens exercising their constitutional right to free speech, however uncomfortable that speech may be for some,” nearly 300 of them wrote in a letter.

And Trump’s former defense secretary, retired Gen. Jim Mattis, broke a long silence by writing that the president’s mobilization of military forces to respond to protests reflected a broader pattern of behavior. “Donald Trump is the first president in my lifetime who does not try to unite the American people — does not even pretend to try,” Mattis wrote. “Instead he tries to divide us. We are witnessing the consequences of three years of this deliberate effort.”

In a series of tweets demonstrating that the remarks got under his skin, Trump ripped Kelly as ineffectual and said he and President Barack Obama both fired Mattis.

It will be harder for Trump to claim that he has the support of the military if familiar brass are publicly supportive of his ouster down the home stretch of his election run. Former Secretary of State Colin Powell, a retired general who has supported Democrats in each of the last three presidential elections after previously backing Republicans, said Sunday on CNN that he will vote for Biden.

Trump’s main political advisers have been struggling to define his message to voters, according to Axios and The Washington Post. That’s a worrisome sign for any candidate.

But at least for now, his political machine appears to be moving toward a combined message: that he is responsible for engineering a recovery from the economic devastation of a pandemic virus he was slow to respond to and that Biden is to blame for job losses from globalization nearly three decades ago.

“One-hundred-and-sixty-thousand jobs lost,” says the narrator in an ad that the America First superPAC is running in Michigan. “It’s not a statistic. It’s 160,000 sleepless nights and hard conversations. Because Joe Biden supported the NAFTA deal, he said he wouldn’t send our jobs to Mexico, and backed bad trade deals with China that shipped our jobs overseas. It’s 160,000 reasons Joe Biden shouldn’t be president.”

More than one million people in Michigan filed for unemployment in April 2020 alone — on Trump’s watch. It’s a good bet that some of them care more about current job losses — about the coronavirus and his trade war with China — than a NAFTA deal that Trump renewed. Though he says he wants to beat Biden, he has done little to get closer to the people in order to hear why 4 out of 5 Americans think the country is out of control.

Jonathan Allen is a senior political analyst for NBC News, based in Washington. 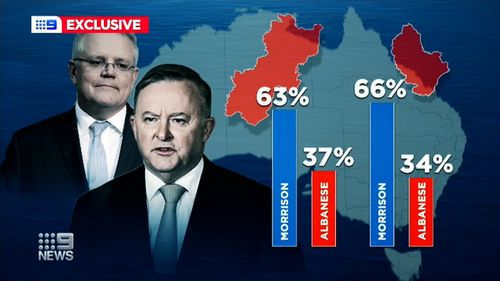 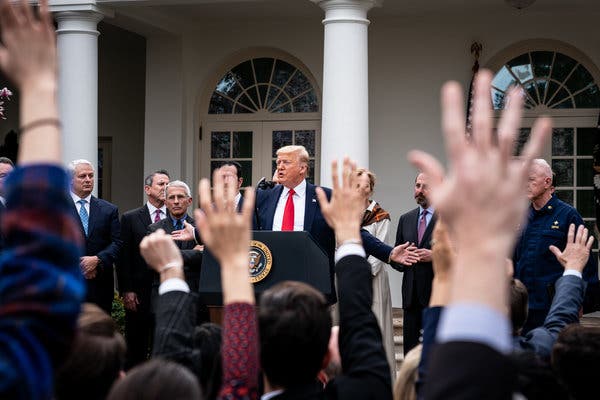 Google won’t tell you its guess about your politics – Quartz