The nonprofit that funded President Donald Trump’s post-election transition has agreed to shut down and a senior State Department official will pay a fine under a settlement resolving a lawsuit by New Jersey’s attorney general.

Trump for America, Inc., once known as Trump Transition Project, Inc., was incorporated in New Jersey and raised millions for the transition, according to state Attorney General Gubir Grewal. He sued the group alleging it failed to register with the state as a charitable organization, required because it raised money in the state, and then failed to comply with a subpoena.

The Trump transition dismissed the claim as a “paperwork issue,” and the settlement did not include any admission of wrongdoing.

But a senior State Department official whose office was under investigation by ousted Inspector General Steve Linick has also been caught up in the lawsuit.

Acting U.S. Chief of Protocol Cam Henderson, who was an aide to former New Jersey Gov. Chris Christie, was paid by the Trump transition to raise money through her LLC, KCH & Associates. But New Jersey’s attorney general alleges she failed to register as a fund raiser as required by state law.

Under the settlement reached in New Jersey Superior Court, Trump for America, Inc., agreed to be dissolved, although it’s likely the group would not have any significant future activity anyway since the transition is long over. The group must also retroactively register with the state, turn over documents previously subpoenaed, and pay a $30,000 fine – although all but $2,500 of it will be forgive if the group complies with the other terms within a year.

“This case should send a message that all are equal before the law, and none are above it,” Attorney General Grewal said in a statement.

Henderson will also have to pay the same fine — $30,000, with all but $2,500 forgiven if she complies — and will have to register retroactively with the state while agreeing not to raise money there in the future.

Henderson, who has yet to be confirmed as U.S. Chief of Protocol, is also under scrutiny as part of an inspector general investigation into leadership issues at the Office of the Chief of Protocol, NBC News previously reported. The investigation is one of several relating to Secretary of State Mike Pompeo’s office that Linick was pursuing when Pompeo got Trump to fire him. It was Henderson’s office that ran Pompeo’s lavish “Madison Dinners” that NBC News exposed and is now the subject of a congressional inquiry.

The State Department and Henderson’s lawyer did not comment.

“This settles a nonprofit paperwork issue from 2016, without any admission of wrongdoing, and will not affect the organization’s longstanding plans for dissolution,” said Kory Langhofer, an attorney for the Trump transition.

Under the Presidential Transitions Acts, the federal government pays expenses and provides support through the General Services Administration for the transition-planning that both major party nominees begin well ahead of Election Day in case they win.

But the transition, through a nonprofit, can also raise private funds. A Government Accountability Office report in 2017 found that the Trump transition told the GSA it had raised $6.5 million in private funds from more than 3,000 contributors.

Josh Lederman is a national political reporter for NBC News.

Monica Alba is a political reporter for NBC News. 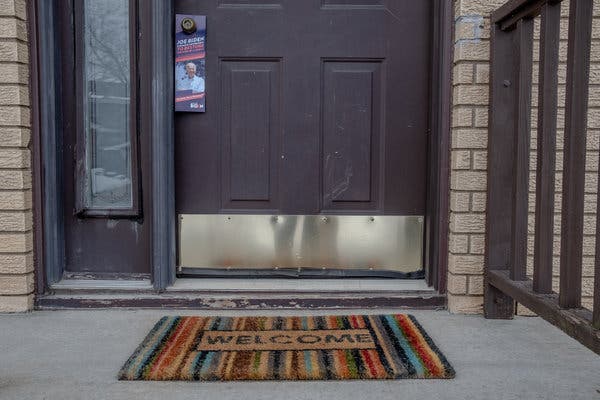 Knock, Knock, Who’s There? No Political Canvassers, for the First Time Maybe Ever – The New York Times