Stepien knows exactly when each state on the campaign’s target list begins early voting or sends out mail-in ballots, and he can rattle them off with ease. Last Friday, North Carolina began mailing absentee ballots to the more than half a million voters who requested them. Georgia sends them out next, on September 15, followed two days later in Wisconsin. Early in-person voting comes after that, first in Minnesota (September 18) and then Michigan (September 19).

Though Election Day is less than 60 days out, in reality the campaigns have only a few more weeks before millions of people start casting ballots. More than half of all voters are expecting to vote early this cycle, either in person or by mail. For the Trump campaign, September is a crucial month, when millions of persuadable voters in crucial battleground states start casting ballots.

Although Stepien faces an unprecedented challenge — trailing in some national polls by double-digits with an unpopular incumbent in the midst of a pandemic — he has what Republicans believe is a crucial advantage over Democratic opponent Joe Biden: the Republican Party’s sophisticated, billion-dollar get-out-the vote operation.

Trump Victory, the joint operation between the RNC and the Trump campaign, has an army of 2,000 paid field staffers in 17 states and more than 2 million volunteers making phone calls and knocking on doors. The field operation claims to have made more than 90 million voter contacts in the cycle, including 12 million door knocks since they resumed the practice in June.

In just the last week, according to Trump Victory spokesman Rick Gorka, volunteers have knocked on more than 533,000 doors across the key states of North Carolina, Michigan, Wisconsin, Minnesota and Georgia.

The sped-up cycle means Stepien’s job of closing the gap with Biden is even harder. It all adds to the pressure and time crunch he’s been in since taking over the campaign from Brad Parscale in July. The shortened timeline is of a particular obsession for Stepien, who asked his team during an all-staff meeting in July to win each day of the race that they had left.

During these crucial weeks, Stepien has redirected ad money into states like Minnesota, where the Trump campaign more than tripled its TV spending in August and September from the previous two months. He’s also flooding absentee voters in must-win North Carolina with mailers and direct digital advertising, reminding them to get their completed ballots in the mail as soon as possible. And it’s no mistake that Trump himself has visited North Carolina three times in the past three weeks.

And while the campaign has made some new hires, many more have been in place for months or even a year in some places. It’s these relationships with voters and local party officials that Stepien and other top campaign officials say gives them a crucial edge over Biden, whose campaign has had to scale up in the past few months amidst the challenges of the pandemic.

He still faces an uphill climb, and Trump’s vaunted money advantage has all but disappeared in the past few months. Meanwhile, the President’s own skepticism and often hostility to early and mail-in voting has muddled the message. Nevertheless, Stepien is counting on these conventional get-out-the-vote efforts to win an unconventional election.

“It is a super labor-intensive effort to actually translate a voter into a vote during the early voting or absentee period,” Stepien told CNN. “The fact that we have invested so much, so early, I think is going to pay dividends, especially as people are going to be casting votes during different times.”

An advantage over Democrats?

When it comes to the raw number of field organizers, Democrats can claim to match the Republicans. According to Biden campaign deputy states director Molly Ritner, Biden has around 2,000 paid field staff across 15 states plus the two congressional districts in Maine and Nebraska that could be contested.

But those field operations in key battleground states are relatively new for Biden. In June, for instance, the campaign announced its state director for Michigan, one of the key states Democrats hope to put back into the “blue wall.” But Trump’s Michigan state director has been in place since May — of 2019.

One advantage Republicans have is smooth integration of resources and efforts from the national party to the local level. In states across the country, paid Republican campaign staffers have been an active presence for months, a year, or even longer. Placing the field operatives in early means they have had time to cultivate important relationships with local activists and leaders, usually before the coronavirus halted in-person meetings and strategizing.

How to make sure your 2020 mail-in vote is counted

“He’s a very on-the-ground type guy,” said John Dalton, a legislative district GOP chairman in Pima County around Tucson. “He’s been doing very well in motivating the grassroots and making sure that everyone’s kind of involved and feels included in this election, whether you’re from the southern border towns all the way up, from top and bottom.”

The disciplined planning from the top is something longtime local party leaders have noticed, especially compared to the more haphazard efforts in 2016, when the RNC had just a few short months to coordinate with a short-staffed Trump campaign. This time, they say, things are different.

“In terms of coordination and organization, this one is probably as good as I’ve ever seen,” said Rich Leary, the chairman of the Brunswick County Republican Party in North Carolina. “They’re much more organized than in ’16. The data is really, phenomenally good. There’s a great deal of sharing. We’re getting a lot of very good voter information.”

In some cases, the GOP’s poor showing in the 2018 midterm election shook local Republicans out of complacency. That’s been matched from the national level, says Kim Owens, who chairs a legislative district-level Republican party in the western suburbs of Phoenix.

There’s also a big difference in what sort of campaigning field organizers and the volunteers they’re recruiting are doing, too. While the Trump team has continued to canvass neighborhoods in person, knocking on doors to either talk with voters or leave campaign literature, Biden and the Democrats have given it up in the name of public health.

“We have taken this stance from the get-go that we are not going to do anything that puts the safety of our staff, volunteers or voters at risk and we are going to listen to medical experts about what is appropriate,” said Ritner. “So, for the last few months, these organizers have been working from home and engaging with volunteers online, over the phone and via text.”

Republicans, meanwhile, have been relatively aggressive about getting directly in front of voters to encourage them to get to the polls or complete a mail-in or absentee ballot. Trump Victory encourages workers and volunteers to follow local and state orders on social distancing, but otherwise, door-knocking is back to normal. Gorka says Trump Victory volunteers have knocked on more than 3.3 million doors in the early-voting target states of North Carolina, Georgia, Minnesota, Michigan and Wisconsin.

How Republicans are playing Obama’s game

The Trump campaign and the RNC are using an old-school approach in the digital age, and one consciously modeled after Barack Obama’s successful 2012 reelection campaign.

Designed to update how Republicans turn out the vote, the GOP’s new ground-game strategy uses data to drive even the most mundane decisions, such as where to locate a local field office (often very close to where the Obama-era Democrats placed theirs). But it’s also meant a rededication to old, tried-and-true practices like knocking on doors and calling up voters directly.

The revolution in Republican get-out-the-vote began in 2015 with Chris Carr. A veteran of GOP races, including running Mitt Romney’s Nevada campaign in 2012, Carr was tasked with drafting a new plan for maximizing turnout in the 2016 election, no matter who was the Republicans’ nominee.

Carr brought into the RNC everything he could get his hands on about field organization, from the George W. Bush campaign’s 2004 after-action report to “Groundbreakers,” the 2015 book by former Obama field operatives that outlines how the Democrats won two straight presidential elections. (The latter is required reading for nearly every Trump Victory field staffer.)

As he worked in the run-up to the 2016 election, Carr discovered that Republicans had a lot of catching up to do. The idea was to find better ways of using data about voters — how regularly they vote, which issues appear to motivate them, how responsive they are to digital ads or physical mailers — to better tailor the party’s overall get-out-the-vote strategy. His team set out to divide states up into geographic “turfs” of similar size (on average, about 22,500 voters) as a way to organize and localize volunteer the work of turning out Republicans.

Carr told CNN he realized his team was on to something when they discovered that even the location of GOP field offices could be modeled to maximize turnout of “persuadable” voters. In many cases, the ideal site for a Republican office was almost exactly where the Obama campaign had placed its own field office in 2012.

“It literally almost lined up,” Carr said, still in disbelief.

The strategy meant grooming a new crop of field operatives. Modeling the Obama campaign’s fellows program, the RNC launched its own six-week training program, the Republican Leadership Initiative. By the time Trump became the nominee in 2016, the GOP had 1,100 paid field organizers trained and ready to work in the field. They also had something they hadn’t expected: an invigorated base of volunteers dedicated to spreading the Trump message.

“We obviously had a nominee like Obama in that there was more of a movement behind him,” Carr said. “All of a sudden, we had new volunteers showing up.”

All of this groundwork from the RNC and flexible decision making by the campaign is being challenged, however, by a pair of unchangeable conditions: the coronavirus, which has necessarily hampered some of the direct, in-person campaigning, and Trump himself, who poses a more subtle problem.

The President’s months-long disparagement of mail-in voting has made it difficult for Republicans on the ground to encourage their voters to take advantage of it in swing states. And even when Trump does get on board in supporting mail-in ballots, he often undercuts the message, as he has done in North Carolina recently by encouraging those who send in absentee ballots to “test” the system by also trying to vote in person.

Several Trump supporters at the Winston-Salem rally told CNN they were either considering or already had plans to vote early.

“My mind is made up,” said Claudine Bachmann Ray, a North Carolinian who said she plans to vote early. “I wouldn’t even have to listen to a debate — if there is one.”

The President’s messaging on voting is still cause for confusion. At the same event, the President also criticized “unsolicited ballots” being sent out to voters as unfair. But in North Carolina, voters wishing to vote absentee must request a ballot and are never mailed one unsolicited. In other states, the law provides that ballots are mailed to every registered voter.

While in general, voters in Winston-Salem felt comfortable with the concept of early voting, they were clear the practice must still conform to Trump’s standards.

“I am OK with it as long as it is in person that they can check it against the rolls, so there’s poll watchers for both parties to make sure that everything’s on the up and up,” said John Mullin of High Point. “The integrity of the vote is important.” 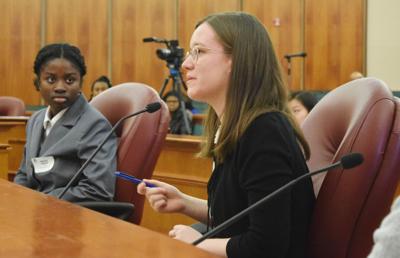