But recently and suddenly, his rhetoric has shifted. This week, while announcing a major weakening of environmental protections, he said of climate change, “nothing’s a hoax about that. It’s a very serious subject.”

Has Donald Trump suddenly become worried about rising climate pollution and its impact on our health and economy? Did he read through the National Climate Assessment and change his long-held view on the science of climate change?

More likely, he read the polls. And they make clear that Donald Trump’s record on climate is a political vulnerability.

Don’t take it from me. There are more polls than I can count. Polls that, of course, show that progressives in early primary states are deeply concerned about climate change, but more importantly, we’ve seen people in key states who are also increasingly worried about this issue.

In fact, in the largest swing state of Florida, a majority of residents understand the impacts of climate change and want action.

And that’s what is getting President Trump’s attention. He launched his campaign in Florida, called himself an environmentalist in West Palm Beach and even officially moved there, holding a “homecoming” rally — reinforcing the fact that the state will be ground zero for the presidential fight.

Whatever else you can say about Trump, he can read a crowd like few others. If his rhetoric on climate change is shifting, it’s because he senses the politics are now different.

For Trump, the hard math is not that climate pollution in our atmosphere has reached record levels — it’s that he can’t be re-elected without winning Florida, a state on the front line of climate impacts.

But it’s not just Florida. People across the country are waking up to the stark realities of the climate crisis. From the devastating floods in the Midwest, to what feels like the never-ending fire season in the West, to the more frequent and devastating hurricanes in the Southeast.

That’s why Americans are increasingly prioritizing this issue. They’re demanding that their public officials tackle this crisis head-on with ambitious climate policy. The result must be a transition to a 100 percent clean economy.

Trump may be learning new sound bites on climate change, but actions speak louder than words. The truth is, Donald Trump is still the president and can take real and meaningful action now.

But instead, his administration been making systemic attacks on our air, water and public health for the past three years.

Take clean cars, where the administration isn’t just rolling back a federal clean car standard, but issuing California to take away their right to set their standards for pollution from vehicles.

Just last week, his administration proposed gutting the federal review of projects like pipelines and drilling projects; he threatened to veto a water safety measure around PFOS, a harmful chemical containment; and the Environmental Protection Agency (EPA) pushed ahead to weaken protections from coal-related water pollution.

President Trump has also picked lobbyists and industry insiders for key environmental positions, including putting a coal lobbyist in charge of EPA and an oil and gas lobbyist in charge of the Department of the Interior. It’s no surprise that they’re undoing progress, proposing rules that pollute our air and water, curtailing and cutting critical research funding, and simply discrediting science and scientists.

This isn’t leadership on a “very serious subject.” Let’s call President Trump’s newfound religion on climate what it is — political lip service.

Joe Bonfiglio is the president of EDF Action, the advocacy partner of the Environmental Defense Fund. 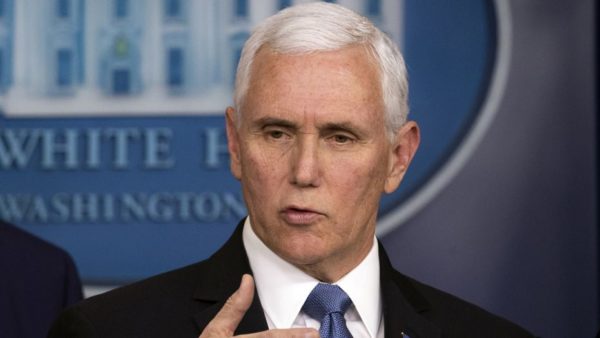