At a critical moment in Sacramento, days before the state legislature voted on a controversial bill to classify gig-economy workers as employees rather than independent contractors, Sen. Elizabeth WarrenElizabeth Ann WarrenWarren goes local in race to build 2020 movement 2020 Democrats make play for veterans’ votes 2020 Dems put focus on stemming veteran suicides MORE (D-Mass.) weighed in with a supportive op-ed.

When Amazon dumped more than $1 million into Seattle City Council elections, Warren accused the corporation of trying to buy politicians who would oppose a tax on big businesses.

And when the Las Vegas City Council took up a proposal to criminalize sitting on sidewalks, sleeping in public or setting up tents, Warren criticized the ordinance as an effort to criminalize homelessness.

In an era of nationalized elections, and at a moment when President TrumpDonald John TrumpGOP senators balk at lengthy impeachment trial Warren goes local in race to build 2020 movement 2020 Democrats make play for veterans’ votes MORE dominates the political conversation like no one before him, Warren’s campaign has turned to an old maxim favored by former Speaker Tip O’Neill (D), another Massachusetts politician: All politics is local.

Warren and her campaign have weighed in on dozens of local issues, from Pacific Gas & Electric’s move to cut off power to hundreds of thousands of California residents amid the threat of wildfire to a Minnesota oil pipeline, from abortion bans in South Carolina and Alabama to voter purges in Ohio and Georgia.

Presidential contenders are usually loath to insert themselves into thorny local political debates, leery of getting on the wrong side of activists who might otherwise support them or stirring up a hornet’s nest if they do not fully understand the contours of an unfamiliar political scene.

“Whenever you weigh in to a state or local issue in any given state, you’re going to inherit not just gratitude from supporters of that measure, you’re going to get the ire of opponents as well,” said Garry South, a longtime Democratic strategist in California. “You’re potentially going to trigger opposition and hostility from those who are on the other side of the issue. That’s a calculated risk you have to take.”

But Warren has demonstrated few such qualms. Campaign advisers say the point is to show local activists — both in key early states and in other states that will vote later in the Democratic nominating process — that she is building a team embedded in their communities.

Campaign manager Roger Lau makes a habit of calling local officials across the country every day, asking what issues are driving the conversation in their backyards.

“Our campaign is building a grassroots movement from coast to coast, and that means meeting people where they are on the issues they care about,” said Alexis Krieg, a Warren spokeswoman. “Sen. Warren isn’t waiting until she’s in the White House to make change — she’s doing it right now by throwing her support behind local issues that will help put power in the hands of the people.”

Warren’s involvement in local issues has even forced some of her leading rivals to join her, lest they risk being seen as behind the curve.

Paying homage to local interests is hardly new in presidential politics. It is almost a rite of passage for contenders visiting Iowa for the first time to extol the virtues of ethanol or those visiting Nevada to pledge an end to a federal proposal to store nuclear waste in Yucca Mountain.

At times, candidates will use a local issue to draw a contrast with a rival or stand out from a crowd. Bob Dole backed a series of California propositions in the mid-1990s limiting services for immigrants without legal status and banning affirmative action in hopes of putting the state in play in the 1996 election.

But the breadth of Warren’s interventions stands out. In New Hampshire alone, her campaign has filed an affidavit in court supporting an American Civil Liberties Union lawsuit against a state law that would block college students from voting; editorialized about a plastics factory that risked contaminating ground water; praised the state’s decision to allow people to choose nonbinary gender identifications on driver’s licenses; and congratulated a nursing center’s employees who voted to unionize.

Elsewhere, Warren has criticized a New Jersey school district that wanted to ban students with lunch debt from attending other activities. She tweeted her support for a California ballot measure to increase property taxes to pay for public schools. And she opposed legislation in New York that would have made it more difficult for minor parties like the Working Families Party to get ballot access.

Observers say Warren’s involvement in local issues stands as a small example of her broader positions, a way to demonstrate a connection to individual communities and to illustrate the broader point.

“Warren is weighing in on state and local issues that have clear national implications. Her stand on the Las Vegas ordinance has a connection to her position on the broader national issue of homelessness. In other cases, the local issues play into national concerns about worker rights, corporate power and campaign finance reform,” said John Pitney, a political scientist at Claremont McKenna College. “The state and local issues are of a piece with her broader approach to public policy.” 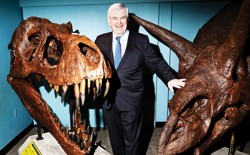