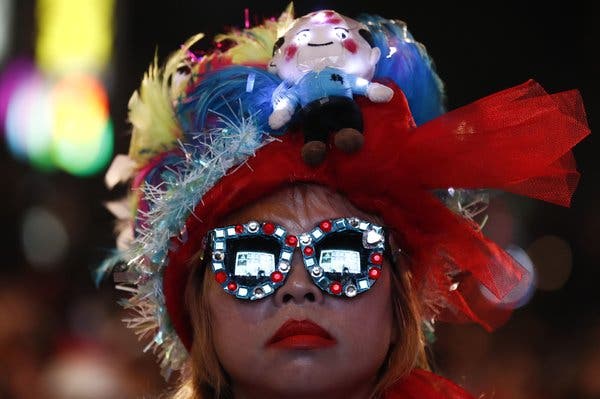 TAIPEI, Taiwan — Populism was supposed to be the winning formula. With the ruling Democratic Progressive Party (D.P.P.) steadily campaigning on growing anxiety over threats to Taiwan’s national identity, the Kuomintang, a party that favors close ties to China, risked being consigned to playing permanent opposition. Populism seemed to offer it a way out.

It was populist promises, after all, that had helped Han Kuo-yu, of the Kuomintang, triumph in local elections in late 2018.

Yet the same playbook failed him and his party miserably in the general elections this weekend. Not only was Mr. Han unable to woo new voters; he couldn’t even hold on to many traditional Kuomintang sympathizers. President Tsai Ing-wen was re-elected with 57.1 percent of the popular vote; the D.P.P. won 61 of the 113 seats in the national Legislature.

The D.P.P.’s victory is partly the result, as many analysts had predicted, of its successful efforts to drag the election back onto the conventional battleground of sovereignty and identity. Ms. Tsai invoked often the protests in Hong Kong to remind voters of the threat that China poses.

Yet the D.P.P. election stands for more than a rejection of the Kuomintang’s cozying up to China; it was also a repudiation of Mr. Han’s populist discourse.

Mr. Han’s stump speeches were full of such themes. He claimed to know the people and represent them against a craven elite. Taiwan had once burst with vitality and prosperity, he said, but now it was stagnating because the Tsai administration had put its interests above those of the population. At a rally in early December, Mr. Han denounced “a small cabal” at the helm of the D.P.P. “They feast and feast,” he railed. “The factions divide the spoils among themselves.”

“These people,” he added, “eat the flesh and drink the blood of Taiwanese people. Now, after three and a half years, all of Taiwan is sick.”

Mr. Han spoke relentlessly about his connection with the real people, the “shumin.” He claimed that the “shumin” lead bitter existences, that all they want is to have “good daily lives” and that this could be ensured by entertaining close relations to China — the quickest way to create jobs, markets and other economic opportunities.

When Mr. Han ran for mayor in the southern city of Kaohsiung in 2018, the D.P.P. attacked him as unfamiliar with policy and claimed that his proposals for creating jobs were unrealistic. But those technocratic arguments fell flat against Mr. Han’s grand commitment to stand with the people. And Taiwan’s sovereignty seemed a distant worry from the usual concerns of voters in local elections. Mr. Han’s shocking victory then, and in a city traditionally hostile to the Kuomintang, jolted the D.P.P. leadership.

The 2020 general elections were inevitably going to be a tougher challenge for Mr. Han, partly because questions of national identity would naturally become salient again. But by then D.P.P. had also figured out a way to strike at Mr. Han’s credibility as a populist: It began to argue that it was Ms. Tsai, not Mr. Han, who was working hard for the people and that Mr. Han was no “shumin” at all.

The D.P.P. portrayed Mr. Han as detached, a mayor more interested in running for president than in solving his city’s problems. The government camp claimed that he failed to contain an outbreak of dengue fever, that he skimped on overseeing flood-relief efforts to attend a lavish dinner — and even that he slept until noon. Ms. Tsai, instead, was credited with numerous accomplishments on bread-and-butter issues: higher wages, lower taxes, more spending on popular social welfare programs and efforts to prevent the swine flu epidemic raging through much of Asia from reaching Taiwan. When the media reported that Mr. Han had bought and sold luxury apartments in Taipei, the D.P.P. accused him of being a real estate speculator who profited from his political connections.

Public trust in Mr. Han plummeted over the course of 2019. According to surveys conducted by Tai Li-an, one of Taiwan’s most respected pollsters, and published by the news site Formosa, the percentage of respondents who said they distrusted Mr. Han rose from more than 27 percent in February to about 57 percent in November. His support among independent voters withered, from more than 41 percent in February to less than 15 percent in December. Even among supporters of the Kuomintang camp, his base, support dropped from nearly 89 percent to a little more than 66 percent over the same period.

In a Dec. 18 presidential debate, Ms. Tsai drove the D.P.P.’s message home. She mentioned a long list of her administration’s policies to help families with small children, taxi drivers, night-market vendors, small-shop owners, retired farmers and young entrepreneurs. “We have not forgotten them,” Ms. Tsai said of the “shumin.” “We have been working constantly for them, to solve their problems. It is Mayor Han who has forgotten his responsibilities and promises to them.”

Yes, concerns over encroachment by China and threats to Taiwan’s sovereignty were critical in determining this weekend’s election. But the D.P.P. also beat Mr. Han at his own game by convincing voters that he is a lousy populist.

Nathan F. Batto is an associate research fellow at the Institute of Political Science, Academia Sinica, in Taipei.

The Times is committed to publishing a diversity of letters to the editor. We’d like to hear what you think about this or any of our articles. Here are some tips. And here’s our email: letters@nytimes.com.