The White House violated federal law when it withheld security aid to Ukraine last year, according to a decision by a congressional watchdog released Thursday.

The Government Accountability Office, a nonpartisan agency that reports to Congress, found that the Trump administration broke a law that governs how the White House disburses money approved by Congress by withholding $214 million worth of equipment, training and other support to help Ukraine in its battle against Russian-backed separatist forces.

The Pentagon aid was overwhelmingly approved by bipartisan majorities in Congress.

The GAO report came as the Senate opened the impeachment trial of President Trump.

“Faithful execution of the law does not permit the President to substitute his own policy priorities for those that Congress has enacted into law,” the decision says. “OMB withheld funds for a policy reason, which is not permitted under the Impoundment Control Act.”

The White House quickly rebutted the charge, criticizing the agency’s decision as an “overreach” and an attempt to insert itself into the “media’s controversy of the day.”

The White House “complied with the law at every step,” Russell Vought, the acting director of the Office of Management and Budget, wrote on Twitter. He also criticized the GAO, saying the agency’s “opinion comes from the same people who said we couldn’t keep National Parks open during the shutdown” 12 months ago.

Democrats immediately tried to use the report to demand more disclosures as part of their impeachment push. OMB is part of the White House and is run by political appointees closely aligned with Trump. Trump’s first OMB director was Mick Mulvaney, who is now White House acting chief of staff. Vought remains close to Mulvaney.

“The OMB, the White House, the administration broke — I’m saying this — broke the law,” House Speaker Nancy Pelosi (D-Calif.) said Thursday. “This reinforces, again, the need for documents and eyewitnesses in the Senate.”

Republican senators, who now play a central role in determining the scope of Trump’s impeachment trial, played down the implications of the GAO’s findings. Sen. Richard C. Shelby (R-Ala.) accused the watchdog of trying to meddle in Congress’s affairs.

Sen. John Cornyn (R-Tex.) said that the GAO report singled out OMB, not Trump himself, and that the lawmaker has had differences with OMB’s practices in the past.

“It’s the Office of Management and Budget, with whom I’ve had a few disagreements over the years about the withholding of money that’s been appropriated by Congress,” Cornyn said.

Last month, the Democratic-controlled House impeached Trump on charges of abusing the power of his office in a pressure campaign against Ukraine.

Trump has attacked the impeachment charges as politically motivated. White House budget officials have defended their power to stop the money from being given to the Defense Department, arguing that congressional lawmakers and executive branch officials routinely demand delays on funding already signed into law.

The GAO decision brings new scrutiny to a chain of events at the White House’s Office of Management and Budget last year. When top White House officials gave directives to the Pentagon to withhold aid for Ukraine, some OMB officials objected, warning that the halt could be improper. At least two officials resigned , in part over concerns about the Ukraine money.

White House officials were withholding the security aid at a time when Trump was pressing Ukraine’s new president to announce an investigation of Hunter Biden, the son of former vice president Joe Biden, a political rival of Trump. Emails released in late December showed that a senior budget official directed the Defense Department to hold off on the aid less than two hours after a July 25 call between Trump and Ukrainian President Volodymyr Zelensky.

Trump and the White House have denied any wrongdoing over the hold on security assistance. Gordon Sondland, the U.S. ambassador to the European Union, told Congress that he believed there was a connection between the aid and Trump’s desire for Ukraine to announce an investigation of Hunter Biden.

The GAO found that the administration broke the Impoundment Control Act, a 1974 law that provides a mechanism for the executive branch to request that Congress reconsider a funding decision that has been signed into law.

“This bombshell legal opinion from the independent Government Accountability Office demonstrates, without a doubt, that the Trump administration illegally withheld security assistance from Ukraine,” said Sen. Chris Van Hollen (D-Md.), who requested in December that the GAO write the report.

The GAO review did not weigh in on the specific House impeachment charges. House lawmakers impeached Trump on two counts: abuse of power and obstruction of Congress. Lawmakers alleged that the president abused the power of his office by withholding the money as leverage to pressure Zelensky into publicly announcing an inquiry that would undermine a political rival and then obstructed the investigation of those actions.

The release of the GAO decision, one day after the House voted to send its articles of impeachment to the Senate, may give political ammunition to congressional Democrats who hope to portray the president and his administration as willing to violate the law for political gain.

Senate Majority Leader Mitch McConnell (R-Ky.) has characterized the House articles of impeachment as flimsy, and it is unlikely that there are enough votes in the Senate to remove Trump from office. Trump has “done nothing wrong,” White House press secretary Stephanie Grisham said Wednesday.

The controversy has for months focused attention on the White House budget office for its central role in delaying the aid.

The administration has previously disagreed with the GAO’s findings, including last year when the agency said the Trump administration violated federal spending law during a government shutdown by allowing popular park sites to stay open.

In cases of a violation, the most the GAO can do is sue the administration to release money, which has happened only once — in the 1970s. The lawsuit was later dismissed when the money was released. 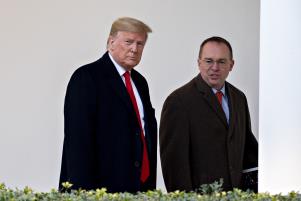 Several administrations have been slapped by the GAO, including those of Bill Clinton and George W. Bush. In general, those administrations released funding after being cited, making lawsuits unnecessary. Most recently, in December 2018, the GAO said the Department of Homeland Security illegally withheld $95 million appropriated for the Coast Guard to support national security efforts. The money eventually was released.

The GAO also found in 2014 that the Obama administration broke the law by exchanging five Taliban commanders for a captured U.S. soldier without giving Congress 30 days’ notice.

OMB began discussing the aid to Ukraine on June 19, the day Trump learned about the assistance from an article in the Washington Examiner.

The agency extended a temporary hold on the aid eight times in August and September before Trump agreed to its release under pressure from multiple politicians on Sept. 11. He already had been informed about a whistleblower complaint about the aid hold and Ukraine pressure campaign.

The GAO is also scrutinizing whether the White House or the State Department or both violated the law by possibly withholding some portion of $161 million in foreign military financing during a six-day period in August, according to the decision.

“We have asked both State and OMB about the availability of these funds during the relevant period,” GAO general counsel Tom Armstrong said in his opinion.

State has provided “limited” information, and OMB as well, he said. “We will continue to pursue this matter” and will provide a decision to Congress, he said.

This lack of a “fulsome” response is of “constitutional significance,” he said.

It hinders the GAO in its role of ensuring respect for Congress’s power of the purse, he said.

Rachael Bade contributed to this report.