With Louisiana Vote, a Governor and State Chart Their Own Path – The New York Times

BATON ROUGE, La. — The first time that John Bel Edwards was elected to lead Louisiana, his critics derided him as the “accidental governor.” In their view, he won in 2015 only because the Republican front-runner had been hobbled by a tsunami of scandal and political misfortune. As his re-election bid geared up, once again the G.O.P. pegged him as vulnerable. The Republican Governors Association classified Louisiana as a “top pickup.”

But when Mr. Edwards, the only sitting Democratic governor in the Deep South, did it again on Saturday, this time overcoming not just his opponent but repeated appearances by President Trump, it was clear he was no fluke. Instead, he provided a glimpse of political shifts, however modest, in Louisiana and an intriguing case study for national Democrats, at a time when the party is engaged in serious soul-searching over whether to heed voices from the left or those closer to the center.

Mr. Edwards combined a pro-gun, anti-abortion conservative social agenda with progressive stances on issues like Medicaid expansion and education, and a record of success in fixing a budget mess left behind by his Republican predecessor. That’s not a model many Democrats are likely to replicate. But his success in attracting both black voters and centrist whites is widely viewed as a crucial lesson for Democratic candidates in the South and well beyond.

As he entered the runoff election on Saturday against a Republican challenger, Eddie Rispone — a political newcomer who built his campaign almost entirely around his allegiance to President Trump — Mr. Edwards saw a surge of support, largely among African-American voters and white moderates living in and around cities. Twenty percent of the African-Americans who voted early in the runoff had not participated in the state’s all-party primary, and there were considerable upticks in turnout around urban hubs like New Orleans and Baton Rouge. Mr. Edwards also drew support from voters who had backed the other Republican candidate in the primary.

The race was, in many ways, a referendum on President Trump. Yet political analysts contend that the outcome was driven by more than just the president’s strategy having backfired.

“I do vote across party lines,” Ms. Robinson said after casting her ballot in Baton Rouge, noting that Democratic candidates in the state often stick to a moderate path: “There are no Elizabeth Warrens running in Louisiana.”

The president’s intense interest in the race, and his injection of national themes into it, appeared to have unintended consequences. State Representative Ted James, a Democrat from East Baton Rouge Parish, credited that as a force propelling black voters to the polls, describing the deep distrust many African-Americans have of Mr. Trump. “The folks I represent, that energized them,” Mr. James said of the three trips Mr. Trump made to Louisiana to rally his supporters.

Mr. Edwards, a West Point graduate, son of a sheriff, and former small-town lawyer from Amite, La., campaigned on achievements in office that carried the broadest appeal, like closing the state budget deficit and expanding Medicaid. His conservative credentials on guns and reproductive rights attracted voters who were wary of a leftward drift in the Democratic Party. He dismayed some in his own party with his support of a state law barring abortions, including in cases of rape and incest, at any time after the pulsing of what becomes the fetus’s heart can be detected.

Still, as Mr. Trump campaigned for Mr. Rispone, he tried to link Mr. Edwards to national Democrats and portray him as a far more liberal politician. Advertisements popping up during every commercial break on television accused Mr. Edwards of “giving millions to illegal immigrants,” turning Louisiana into a “sanctuary city mecca,” and “releasing dangerous criminals.”

Not everyone bought it.

“I had friends of mine who are Republicans, who were Trump supporters, but they voted for John Bel,” said Kyle Green Jr., a former assistant state attorney general who was elected last month as a Democrat to the State House of Representatives. “The charges the Republican Party and Eddie Rispone and Donald Trump tried to lay on the governor and make stick didn’t stick.”

Mr. Edwards received 51 percent of the vote in the runoff on Saturday, beating Mr. Rispone by about 40,000 votes in an election that had been considered a tossup. The runoff was necessary because Mr. Edwards failed to get an outright majority in the primary last month. Mr. Rispone, a Baton Rouge businessman, edged past a Republican congressman, Ralph Abraham, to advance to the runoff; Mr. Abraham later endorsed Mr. Rispone, but some of his supporters drifted to backing Mr. Edwards.

On Saturday, Mr. Edwards notched significant increases in turnout compared to the primary. One congressional district, stretching roughly from Baton Rouge to New Orleans, had an increase of 42,000 voters for Mr. Edwards compared with the primary. “That was by far the biggest increase across the state,” said J. Miles Coleman, the associate editor of Sabato’s Crystal Ball, a nonpartisan newsletter published by the Center for Politics at the University of Virginia.

Political analysts said the results were indicative of a shift in Louisiana, as a divide that had once run been between the state’s north and south was now running between its rural and urban areas, mirroring what has happened elsewhere in the country. With that, cities and their suburbs have had more residents voting for Democrats.

“In certain places, there is a slight blue-ing, and you can see it,” said Roy Fletcher, a Republican political consultant in Louisiana.

While the victory on Saturday thrilled Democrats, Mr. Fletcher cautioned that there was little about it that the party could replicate easily in other Southern states. “It was probably a better lesson for Republicans,” he said: “Pick a better candidate.”

Mr. Rispone, a construction magnate who became a serious contender as more prominent Republicans declined to run, started with little name recognition. He let Mr. Trump dominate at rallies and in television advertisements. His stances on issues parroted Mr. Trump’s.

All the while, he remained a somewhat enigmatic figure. He rarely spoke to reporters, and avoided forums that were traditional staples of the governor’s race, including one that should have been his home field, a gathering of business leaders in Baton Rouge. The Advocate newspaper in Baton Rouge reported that Mr. Edwards had the floor to himself at that gathering, telling the audience, “It speaks volumes that he doesn’t have a vision to share about what this state ought to look like moving forward.”

“The unfortunate thing,” Mr. James, the state representative, said, “is that John Bel has had to work so hard to beat a guy like that.”

Even so, Mr. Edwards was already well known and relatively popular in the state. (The governor pointed out that it also didn’t hurt that the state’s football teams had fared well lately.)

Mr. Edwards first ran for governor as a state lawmaker, familiar to those in the state’s political orbit but not much outside of it. His 2015 bid started as a go-big-or-go-home proposition that became a stunning success after the campaign of his Republican opponent, David Vitter, a United States Senator at the time, combusted over a prostitution scandal and discord within his party.

As governor, Mr. Edwards accepted invitations to the White House, eager to burnish his image with conservatives. And during the his re-election campaign, he steadfastly steered clear of criticizing Mr. Trump. (In his victory speech, he deployed a familiar sugarcoated Southern put-down: “As for the president, God bless his heart!”)

John B. Breaux, a moderate Democrat who represented Louisiana for three terms in the Senate, said the governor had an independent streak that appealed to moderate voters, showing that he could either work with or challenge the Trump administration, depending on what was best for Louisiana.

“Some of these people are like puppets,” Mr. Breaux, who left the Senate in 2005, said. “Trump says jump and they say how high. That’s not what Louisiana wants.”

In a boisterous victory lap on Saturday night that started with a prayer and expressions of thanks to his family, Mr. Edwards used his speech to address issues where he was in line with Democrats outside Louisiana. He pledged to bolster spending on education and health care. He said the state’s minimum wage, $7.25, was woefully insufficient. He also called for equal pay for men and women.

He made a case that his victory was more than a rebuke of Mr. Trump.

“You know, here in Louisiana, we march to the beat of our own second line,” he told the crowd, surrounded by his family and supporters. “We are rich in culture, natural resources and diversity. It’s what makes our great state. And tonight, the people of Louisiana have chosen to chart their own path.” 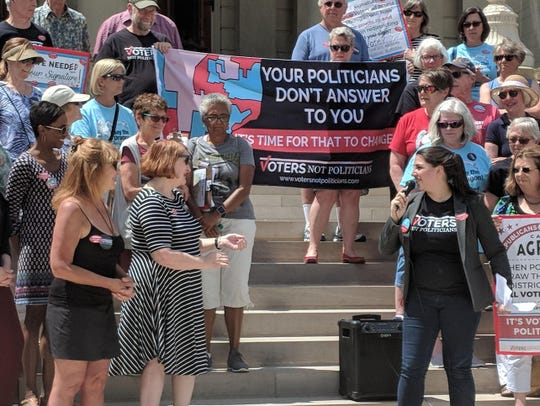