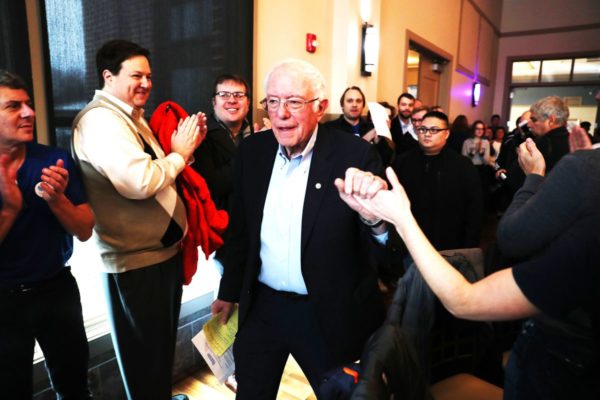 This week, for the first time, the progressive senator from Vermont emerged in first place in a national CNN poll, showing him 3 points ahead of former Vice President Joe Biden, though within the margin of error. For months, Sanders has been hovering around 20 percent in the RealClearPolitics national polling average, but some good recent national and early-state polls are putting him on an upward trajectory.

If his campaign can turn out Iowa’s sizable Latino population and working-class voters, Sanders is bullish about winning the February 3 caucuses. That could shift the ground here in New Hampshire favorably for him — and with a robust operation in key Western states like Nevada and California, two decisive wins in the earliest states could put Sanders well on his way to the Democratic nomination.

Even more importantly, they could prove Sanders’s theory of winning elections: expanding the electorate and getting traditionally neglected groups to turn out. Some might call it a political revolution.

Iowa has roughly 80,000 voting-eligible Latinos, and the Sanders campaign estimates fewer than 1 percent caucused in 2016. The campaign has put a lot of work into increasing that number this year, organizing in Latino communities, airing Spanish-language ads, and sending high-profile surrogates like Rep. Alexandria Ocasio-Cortez (D-NY) to the state.

“If you look at the caucus, it’s something that typically hasn’t been engaged with by working people; you could see that with the low Latino turnout in the last caucuses. What we wanted to do here is turn as many people out as possible,” Sanders’s deputy state director for Iowa, Bill Neidhardt, told Vox.

Winning Iowa is critical for Sanders, but this strategy goes far beyond just one state. Sanders is now the leading 2020 candidate among Latino voters, which is helping boost his profile in the February 22 Nevada caucuses and delegate-rich California, which votes on Super Tuesday. Joe Biden might have a big lead among black voters as a whole, but the senator from Vermont has made significant inroads with younger black voters.

Though Sanders’s 2016 campaign had a reputation for attracting a disproportionately white coalition, that has changed in a big way this time around. Younger voters and people of color may be the key to Sanders’s path to victory.

It all starts in Iowa, in less than two weeks.

If Sanders wins the early states, he has a clear path to the nomination

Sanders’s surge in momentum couldn’t come at a better time for him, in the last weeks before Iowa and New Hampshire. The CNN national poll conducted from January 16 to 19 showed Sanders at 27 percent, followed by Biden at 24 percent, Sen. Elizabeth Warren at 14 percent, and former South Bend, Indiana, Mayor Pete Buttigieg at 11 percent.

Of course, this is just one poll. If polling averages have shown anything about Sanders in the past few months, it’s that he hasn’t moved much below or above his roughly 20 percent of primary voter support — even though he had a heart attack in early October. Polls show Sanders supporters are the most loyal and enthusiastic; with a crowded and splintered field, that might be enough to win.

“Sanders has been the one constant in New Hampshire this entire year,” said University of New Hampshire political science professor Dante Scala. “He’s still very popular among young people, progressives, and he gets some support among white working-class voters in New Hampshire.”

Biden is still first and Sanders second in the RealClearPolitics national polling average and its Iowa average, but the gap between them is closing. Sanders has a slight lead in New Hampshire, though he and Biden are very close there too. With such a close and crowded primary, the final weeks are the most critical. This also means relatively minor changes in turnout can make a huge difference for candidates, especially in the Iowa caucuses.

“If we win Iowa and New Hampshire, I think we stand a great chance to win Nevada, I think we’re strong there,” Sanders told a crowd of supporters this weekend. “I think we’re going to do very well in South Carolina, I think we’re going to win California and many other states on Super Tuesday. And if we do all that, we will have accomplished something never done in the modern history of America, and that is put together an unprecedented political revolution.”

Unlike 2016, Sanders has the campaign infrastructure and planning to prepare for it; he’s had big door-knocking operations in the early states for much of the past year and is well-staffed in multiple Super Tuesday states. The campaign’s massive grassroots fundraising is more than enough to keep Sanders going well past the early states.

Sanders has put a huge emphasis on California, hiring more than 80 staffers and opening five offices in the state, and organizing communities of color. A December study by the LA Times and UC Berkeley Institute of Governmental Studies found Sanders narrowly leading Warren in California, with Biden and Buttigieg in third and fourth. And a November Latino Decisions poll found Sanders the top candidate among Latinos in California by close to 10 points.

“He ran a real campaign here” in 2016, longtime California Democratic consultant Bill Carrick told Vox recently. “He believes strongly he can do well here. He’s going to be a player in these Orange County districts.”

If Sanders pulls off strong performances in the first two states, the work his campaign has put in with working-class voters — whether they’re white, black, or Latino — could make him unstoppable.

After Sanders bowed out of the 2016 presidential race, he admitted his campaign had been too white and too male, and vowed to do better.

The left is also looking different than it did four years ago. Progressive superstars Reps. Alexandria Ocasio-Cortez (D-NY), Ilhan Omar (D-MN), and Rashida Tlaib (D-MI) endorsed Sanders earlier in the year; after the 2018 midterms, progressive politicians are reflecting more of their young, diverse, and liberal base.

A potential boost to Sanders’s campaign this time around is support from Latino voters, with whom the senator is leading nationwide, according to a January Morning Consult tracking poll. Latino voters tend to be younger and more progressive, with ties to organized labor, a group friendly to Sanders. In 2016, he was just introducing himself to Latino voters; now he’s a known entity.

“Harry Reid unlocked this system in Nevada where you have a young population, you have a population that is integrated into labor unions, and Reid uses particularly labor unions to get Latinos out to vote,” said Stephen Nuño-Perez, a senior analyst for the Latino polling firm Latino Decisions. “This is the playbook, and it’s a natural fit for Sanders’s style of how he envisions politics.”

With a Univision analysis showing Latino turnout doubling in the 2018 midterms in eight states — including Nevada, California, Texas, Florida, and New York — Latinos are a fast-growing portion of the American electorate. But community leaders have also long complained about the Democratic Party and candidates failing to engage them. Chuck Rocha, a senior adviser for the Sanders campaign who oversees Latino outreach, says he’s making sure Sanders won’t make that mistake.

“As a chief adviser, I’m going to do what we have demanded campaigns do through generations of being taken advantage of,” Rocha told me.

Latino groups in key states have reported that Sanders’s campaign has been very active there, and the campaign has hired more than 100 Latino staffers across the country, including in top positions. Nick Salazar, the state president of the League of United Latin American Citizens (LULAC), serves as an Iowa campaign co-chair. And Sanders’s California state director is Rafael Návar, a former activist and union organizer originally from heavily Latino East Los Angeles.

Biden leads Sanders and all other candidates among black voters, which could give him a boost in South Carolina and Southern Super Tuesday states. But in a recent Washington Post/Ipsos poll of black Americans, Sanders is the favorite for voters under age 35.

“We’ve asked younger people across the spectrum, but particularly African American younger folks, to go and talk to their parents and grandparents about why they support Sen. Bernie Sanders, and we’re seeing a lot of traction pick up with that,” Sanders national campaign co-chair Nina Turner told Vox.

Sanders still has some work to do with older voters

The biggest question facing Sanders in 2020 is whether the oldest candidate running in the Democratic primary can appeal to older voters.

In national polls, “Biden’s in first place and Bernie’s in second, so we’ve got to overtake him in the most effective way,” Sanders campaign pollster Ben Tulchin told me. “The middle-aged working-class person is really who we’re contesting with Biden.”

A recent Morning Consult national tracking poll found Sanders with commanding leads among both Gen Z (voters ages 18 to 21) and millennials (ages 22 to 37). But among older generations, Sanders lost his edge. Biden led among Gen X (ages 38 to 53) by 30 percent to Sanders’s 22 percent. Among baby boomers (54 to 72), Biden was leading at 35 percent, compared to 14 percent from Warren and 13 percent from Sanders.

“He’s maintained a strong connection and ties to millennials; that’s given him a good base,” Tulchin said. But he added that Sanders needs to do well with middle-aged and older voters. Specifically, the Sanders campaign wants to capture non-college-educated men and women ages 40 to 64, both white and black.

“He needs those working-class voters who are not tied down to one ideology or another,” said Monmouth University polling director Patrick Murray. “That’s the way he’s trying to expand his coalition.” In other words, Murray said, Sanders needs to siphon off Biden supporters.

Even though the midterms showed a growth in youth turnout, older voters tend to be more moderate and to turn out more reliably. Part of why the Sanders campaign has gone after Biden so hard on Social Security is to boost credibility among older voters.

Sanders’s no-nonsense, gruff resoluteness on progressive issues is refreshing to some voters who are sick of Washington’s political antics and corruption.

Go to any Sanders town hall or rally and you’ll find voters who say they think he’s honest and authentic — in large part because he hasn’t budged on his positions in over 30 years.

“He’s so honest, decent, and has been forever,” said Epping voter Elaine Gatchell, who voted for Sanders in 2016 and plans to do so again in 2020. “I don’t think anyone could ever buy him off. I just know he’s such a straight shooter.”

“If he’s on the ballot, he has my vote,” Langdon voter Jennifer Doyle told me recently. “He’s honest and straightforward, no frills. He’s not playing to financial handlers; he’s not beholden. We need that.”

Earlier this summer, questions abounded about whether Elizabeth Warren’s presence in the race would shrink Sanders’s base. While some 2016 Sanders supporters have switched over, polls show Warren has drawn support largely from higher-educated liberal voters, and Sanders has mostly hung on to his young, loyal base.

“It took me a little while to get back on the Bernie train,” Keene voter Jenna Spear O’Mara told me, adding, “I just came back to that gut feeling. I find myself drawn to Bernie; he’s super direct.”

It just might be his ticket to the nomination.

On Politics: Bloomberg Under the Microscope – The New York Times