Firing a Salvo in Culture Wars, Trump Pushes for Churches to Reopen – The New York Times 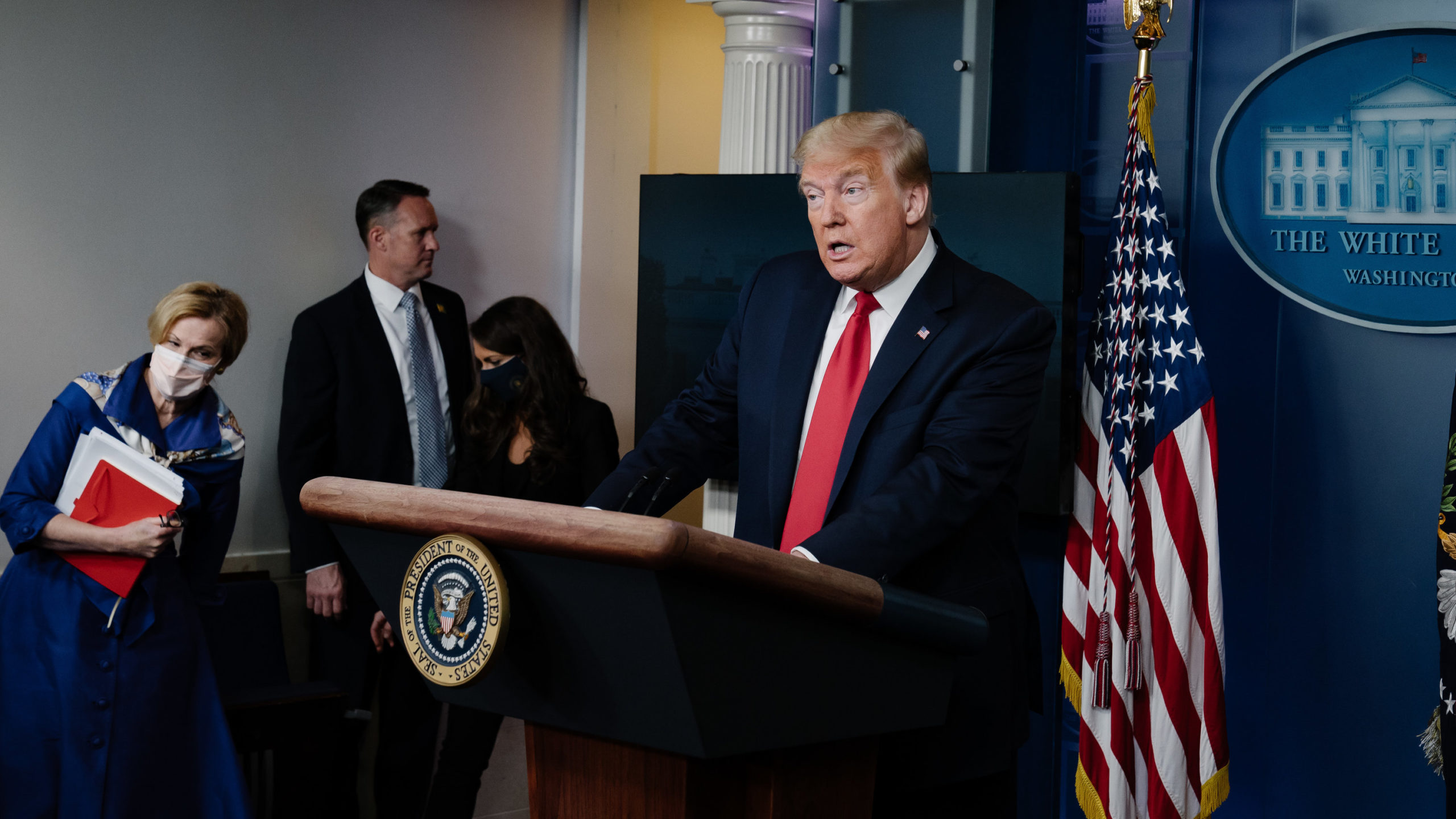 WASHINGTON — President Trump may not consider church essential to his personal life, but it may be to his political future. And so he waded into the culture wars on Friday by demanding that states allow places of worship to reopen “right away” and threatening to overrule any that defy him.

Marching into the White House briefing room for a hastily called announcement, Mr. Trump declared places of worship “essential” operations that should hold services in person this weekend regardless of state quarantine orders stemming from the coronavirus pandemic that has killed nearly 96,000 people in the United States.

“The governors need to do the right thing and allow these very important, essential places of faith to open right now for this weekend,” Mr. Trump said, reading from a prepared text before leaving after just about a minute without taking questions. “If they don’t do it, I will override the governors. In America, we need more prayer, not less.”

The White House could not explain what power the president actually has to override the governors, and legal experts said he did not have such authority, but he could take states to court on religious freedom grounds, which could be time consuming. Attorney General William P. Barr, a strong advocate of religious rights, has been threatening legal action against California.

But in speaking out, the president put himself out front on an issue important to a critical part of his electoral base at a time when his support has been eroding. Mr. Trump has always been an unlikely champion of evangelicals and conservative religious voters; he rarely goes to church, displays only a passing familiarity with the Bible, previously supported abortion rights, has been married three times and paid hush money to a pornographic film actress. But he has cemented a powerful alliance by embracing their political priorities and appointing federal judges with their support.

“Religious conservatives are the most solid core of Trump’s voter base and he needs an especially strong turnout from that community in what appears to be an uphill run for re-election,” said Mark J. Rozell, the dean of the Schar School of Policy and Government at George Mason University and a longtime scholar on religion and politics. “These are Trump’s voters, and he needs them to turn out big this year.”

The status of churches and other places of worship has increasingly become a political flash point as the country begins to emerge from two months of a virtual lockdown to curb the virus.

Churches, synagogues and mosques already are allowed to operate in more than half of the states, although many remain under social distancing instructions, and individual institutions have opted to remain closed for safety.

Other states have been slower to lift restrictions, and tensions are running high in some regions. In California, more than 1,200 pastors have pledged to reopen their doors for in-person worship on May 31 even if limits have not been lifted. Religious advocates have filed lawsuits in multiple states.

One church that lost such a case in Mississippi burned to the ground this week, and the authorities are investigating the possibility of arson after finding a spray-painted message that said, “Bet you stay home now you hypokrits.”

Mr. Trump took a far more confrontational approach on Friday than his public health advisers. After delays and revisions ordered by the White House, the Centers for Disease Control and Prevention released nonbinding guidelines for places of worship to reopen while still advising them to act “in accordance with the guidance and directives of state and local authorities.”

In addition to the usual recommendations for mask wearing, hand washing and social distancing, the C.D.C. urged religious institutions for the time being to avoid sharing prayer books, passing collection plates or offering buffet-style meals. It suggested suspending choirs or congregant singing and chanting because that could spread the virus through emission of aerosols.

While Mr. Trump demanded that churches and other worship houses reopen this weekend, Dr. Deborah L. Birx, the White House pandemic coordinator, offered more measured advice. “Maybe they can’t go this week if there’s high number of Covid cases,” she told reporters after the president left the briefing room. “Maybe they wait another week. But there is a way to social distance, like you are here, in places of worship.”

The president’s politically minded advisers, however, seemed to be itching for a fight. When reporters asked Kayleigh McEnany, the White House press secretary, what power Mr. Trump has to override governors, she did not answer the question but instead impugned their faith. “Boy, it’s interesting to be in a room that desperately wants to seem to see these churches and houses of worship stay closed,” she said.

Mr. Trump’s demand appeared aimed at Democrats who have drawn his ire, including Gov. Gavin Newsom of California, Gov. J.B. Pritzker of Illinois and Gov. Gretchen Whitmer of Michigan. Ms. Whitmer banned large gatherings but also said houses of worship would not be subject to penalties, leaving the precarious decision in the hands of religious leaders.

Mr. Trump’s announcement drew praise from evangelical supporters. “We feel vindicated in the fact that this is what we have said all along, that churches are essential to our communities,” said Jim Franklin of Cornerstone Church in Fresno, Calif., one of the pastors who have vowed to resume services on May 31. “We feel very secure in our position in opening the churches.”

In North Carolina, a federal judge recently sided with churches that sued over Gov. Roy Cooper’s efforts to restrict religious gatherings to 10 people. In Minnesota, some Catholic and Lutheran leaders have said they plan to restart in-person worship next week in defiance of Gov. Tim Walz’s orders.

“We hope that local officials across the country will heed the president’s words and respect houses of worship, including our clients,” said Mark Rienzi, the president of Becket, a religious liberty law firm representing the Minnesota churches. “Religion is an essential service for the well-being of society that cannot be subordinated to the economic interests of the states.”

Other religious leaders expressed more caution. Bishop Kenneth H. Carter, who leads the Florida Conference of the United Methodist Church, said its 700 churches would look at reopening sometime after June 15. “God will reassemble us when we know it is safe. This requires our trust, assurance, maturity, civility,” he said. “Our purpose is to love God and our neighbor. Our purpose is to do no harm, to do all the good we can.”

Several governors indicated they would make their own decisions without regard to the president’s demand. Mr. Newsom said the state had been consulting with faith leaders and was finishing guidelines to be announced by Monday. “We look forward to churches reopening in a safe and responsible manner,” he said.

The guidelines, which will distinguish between megachurches and smaller venues, deal with the configuration of pews and “sanitation protocols,” the governor said. “We deeply respect and admire the faith and devotion and the cause that unites millions and millions of Californians, people of faith.”

In Illinois, Mr. Pritzker said he would “continue to operate on the basis of science and data” when deciding when it was safe to reopen. “I’m as anxious as anybody to make sure that our churches, our mosques, our synagogues open back to where they were before Covid-19 came along,” he said. “We’re gradually moving in that direction. But there’s no doubt the most important thing is, we do not want parishioners to get ill because their faith leaders bring them together.”

Mayor Lori Lightfoot of Chicago rejected Mr. Trump’s call to open houses of worship this weekend, saying he had no authority to do so. “I think we have to realize that virtually everything he says has a political undertone and basis for it,” she said.

David Postman, the chief of staff to Gov. Jay Inslee of Washington State, said the state was working with an interfaith group to develop guidelines. “We don’t believe the president has the ability to dictate what states can and cannot open,” Mr. Postman said.

The president’s message may have little effect in a number of states where houses of worship are already allowed to open in some form, including Alabama, Florida, Indiana, Kentucky, Louisiana, Maryland and Virginia. And in some cases, houses of worship were never required to close, as in Pennsylvania, although Gov. Tom Wolf advised religious leaders not to hold in-person services.

Places of worship in Colorado have been able to open since stay-at-home orders were lifted last month, but many congregations are still limiting services and gathering virtually.

The president’s intervention came as his strength with religious supporters has slipped somewhat. Among white evangelical Protestants who favor Republicans, 77 percent said Mr. Trump was doing a good job dealing with the pandemic, down from 83 percent who thought so in March, according to a poll by the Pew Research Center. Catholic voters who approved of his virus performance two months ago now rate it negatively.

Mr. Trump’s threat to “override the governors” may be no more than more idle saber-rattling. He has made similar threats before without any apparent legal or constitutional basis and never followed through.

“He could make a statement, and even call it an ‘order,’ but there is no legal compulsion for the state governors to comply,” said Harold Hongju Koh, a Yale Law School professor and former Obama administration official.

J. Michael Luttig, a former Republican administration official and circuit appeals court judge, agreed. “The president does not have the unilateral authority to override a governor’s decision temporarily to prohibit the assembly of church congregants because of Covid-19,” he said.

Both Mr. Koh and Mr. Luttig said Mr. Trump’s real recourse would be to order the Justice Department to sue. “But the case would have to work its way through the courts,” Mr. Koh said, “which could take months.” 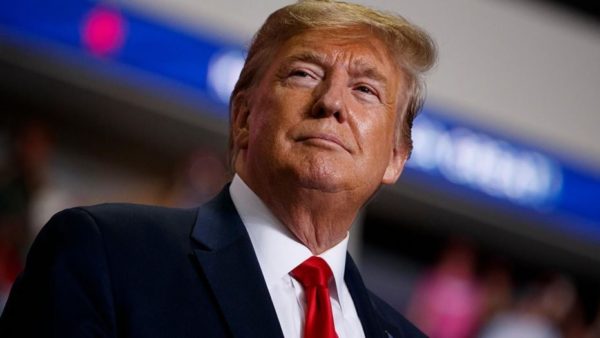