Former Gov. Mark Sanford of South Carolina said on Sunday that he would challenge President Trump for the Republican presidential nomination, criticizing Mr. Trump’s stewardship of government spending and the global economy and questioning the financial ethics of his administration.

Mr. Sanford said he would mount something of a guerrilla campaign against Mr. Trump, who is overwhelmingly popular with Republican primary voters, according to polls. But Mr. Sanford said in an interview that he believed Mr. Trump’s popularity was “certainly wide but perhaps much thinner and much more fragile than people realize,” and that Republicans should be alarmed by the way women and young people recoil from the president.

He said he would focus his campaign on the early-voting states of Iowa and New Hampshire — “going to any place that two or more people are gathered” — and lamented that Republicans in his home state had canceled their 2020 primary out of deference to Mr. Trump.

A longtime fiscal hawk who served two stints in the House of Representatives, Mr. Sanford, 59, said neither Mr. Trump nor his Democratic challengers were speaking to the concerns of voters dismayed by trillion-dollar deficits and “trade uncertainty” spurred by Mr. Trump’s enthusiastic use of tariffs.

“Those people that I dealt with in the Tea Party movement, all those people who just showed up year after year,” Mr. Sanford said, “I believe that those voters are still there and they haven’t been spoken to.”

And Mr. Sanford alluded with concern to a mounting collection of news reports suggesting that Trump administration officials and influence-seekers might be steering money to hotels owned by Mr. Trump and his family, including Vice President Mike Pence’s decision to stay at a geographically inconvenient Trump property in Ireland this month. A president, Mr. Sanford said, had to make sure “that not only are there not conflicts, but there’s not even the appearance of conflicts.”

“I think, legitimately, people raised eyebrows when the vice president stayed 180 miles from a meeting in Ireland, to stay at a Trump facility, and the taxpayer’s on the dime for it,” Mr. Sanford said.

He added, “The idea of people who have business before the federal government coming and just so happening to stay at a facility that’s owned by the president — I don’t think it looks right, I don’t think it sounds right. I think it sets a bad precedent.”

Mr. Sanford is the third Republican to announce plans to challenge Mr. Trump, along with former Representative Joe Walsh of Illinois, a one-term lawmaker turned talk radio provocateur, and former Gov. William F. Weld of Massachusetts, a moderate who ran for vice president in 2012 on the Libertarian Party ticket.

[Sign up for our politics newsletter and join the conversation around the 2020 presidential race.]

Mr. Sanford said he had called both his fellow insurgents over the weekend, speaking with Mr. Weld and leaving a message for Mr. Walsh. Though the three are nominally competitors, Mr. Sanford said he believed they would benefit from strength in numbers.

“It becomes harder and harder for the president and the party to dismiss a chorus of voices as opposed to one,” Mr. Sanford said.

And he argued that the cancellation of a number of Republican primary contests, including South Carolina’s, should be seen as a sign of weakness on the part of the president.

“If the president’s really at 90 percent, then why in the world would you not want a stomping win in the first-in-the-South primary?” Mr. Sanford said. “You would insist on there being a primary.”

In some respects, Mr. Sanford is the most conventionally qualified challenger of the group, a onetime heartthrob of small-government activist groups who was twice elected chief executive of a politically consequential Southern state. Little more than a decade ago, a Sanford presidential campaign was seen as something close to inevitable, under starkly different conditions than the ones confronting him now.

But Mr. Sanford’s career took an abrupt turn when he acknowledged in 2009 that he was having an extramarital affair with a woman overseas and had furtively left the state to visit her in Argentina. His plans to challenge President Barack Obama unraveled and he was reduced to a figure of fun on late-night television. Mr. Sanford later won a seat in the House, only to lose the Republican nomination last year to a primary challenger, Katie Arrington, who was backed by Mr. Trump.

But Ms. Arrington lost to a Democrat, Joe Cunningham, in the general election — another development Mr. Sanford called a warning sign for his party.

Who’s in, who’s out and who’s still thinking.

Mr. Sanford’s brand of anti-spending conservatism has faded as a dominant strain in Republican politics in recent years, and it is entirely unclear whether the Tea Party-aligned activists who once thrilled to his platform might still find him a compelling figure.

The federal deficit has ballooned during the Trump presidency and will widen to $1 trillion for the 2020 fiscal year, according to the Congressional Budget Office. But Mr. Trump has been largely dismissive of deficit spending as a political issue, instead offering a message about national identity and racial and cultural grievances that the Republican base has heartily embraced.

As a member of Congress, Mr. Sanford amassed a solidly conservative voting record, including support for key Trump administration priorities like the 2017 tax-cut law. While the law increased the deficit, Mr. Sanford said he did not see it as a “gargantuan change to the revenue stream” and argued the law had made the American corporate tax rate more competitive with other countries.

But Mr. Sanford said he would be putting together a plan for reforming some of the most expensive and popular government programs, including entitlement programs like Social Security, and chided Mr. Trump for having dismissed government spending as a political issue.

“This is a president who said we’re not going to touch entitlements and, basically, we don’t have a problem,” Mr. Sanford said.

Mr. Sanford may have the opportunity to model fiscal austerity as a presidential candidate. Like Mr. Trump’s other challengers, he is likely to struggle to raise money, and on Sunday he outlined his thinking about the presidential race on board a bus from Washington to New York.

Mr. Sanford conceded with a chuckle that he did pay for a premium seat.

“It was an extra eight bucks to get the front seat,” he said. “I’m in the front window seat.”

Mark Sanford, Once Targeted by Trump, Weighs Primary Challenge Against Him

Joe Walsh Says Trump Is ‘Unfit’ to Be President. Some Say the Same About Him.

Bill Weld on Nixon, Mueller and How He Plans to Beat Trump in the Primary

Alexander Burns is a national political correspondent, covering elections and political power across the country, including Donald Trump’s 2016 campaign. Before coming to The Times in 2015, he covered the 2012 presidential election for Politico. @alexburnsNYT

‘A presidency of one’: Key federal agencies increasingly compelled to benefit Trump – The Washington Post 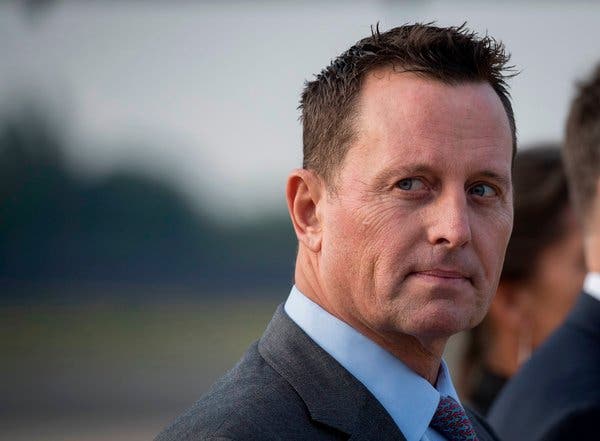