This report is part of “Turning Point,” a groundbreaking month-long series by ABC News examining the racial reckoning sweeping the United States and exploring whether it can lead to lasting reconciliation.

Mississippi voters have never elected a Black candidate to statewide office, despite having the largest proportional Black population of any U.S. state at nearly 40%.

Advocates hope an amendment on the November ballot may change that.

Mississippi is the only state with a multistep process for electing statewide positions like governor, attorney general and secretary of state. Its electoral college-like voting system was designed by white framers in Southern Reconstruction with the intent to disenfranchise minority voters and uphold white power in politics.

If the amendment to simplify the process passes, advocates say it would spur more minority candidates to run for office in the Magnolia state — and assure minority voters their constitutionally protected right to equal representation is secure. If it doesn’t, they say it will serve as a painful reminder of the state’s deep history of voter suppression.

MORE: What America owes: How reparations would look and who would pay

“Voters finally have a chance to overturn a racist 1890 election law that has no place in our 2020 Mississippi or in Mississippi of the future,” Vangela M. Wade, president and CEO of the Mississippi Center for Justice, told ABC News. “Jim Crow is on the ballot.”

Other states fill statewide positions by using a popular vote and then a runoff election if required. Not Mississippi.

A candidate in a Mississippi statewide election first must win the popular vote and then win a majority of the state’s 122 House of Representatives districts — 42 of which are majority Black. If no candidate wins both the popular vote and the electoral vote, the race is decided by the Mississippi Legislature. As with the electoral college in a presidential election, representatives are not obligated to vote with their districts.

Jarvis Dortch, executive director of the American Civil Liberties Union of Mississippi and a former Mississippi state representative, D-District 68, said that the current process essentially “blocks the door from Black participation in our statewide government.”

The election law played a major role in the 1999 gubernatorial race between Democratic candidate Ronnie Musgrove and Republican Mike Parker, both of whom are white. Ultimately, the Democratic-controlled House chose Musgrove as the winner. In 2003, Gary Anderson, a Black candidate who ran for state treasurer, came close to winning but lost by 5.15%, according to a campaign website.

MORE: The fight to vote: Black activists work to upend a history of voter suppression

Dortch cited an analysis filed in U.S. District Court for the Southern District of Mississippi last year found that a Democratic candidate — or Black-preferred candidate — “would need more than 55% of the statewide vote in order to secure a majority of electoral [House] votes. Candidates preferred by whites, by contrast, would be able to win the electoral vote without winning a majority of the popular vote.”

“There are so many barriers to getting elected statewide as a minority candidate, and this is the final one. Even if you somehow cross all of the other challenges and come in around at 55% of the vote, you could be thrown out by the House of Representatives voting on a party-line basis,” Dortch added. “All of it together can discourage, especially Black officials, from looking to run statewide.”

The proposed state constitutional amendment, “Statewide Ballot Measure 2,” would change the process so that winning a race for governor or any other statewide office would require a simple majority. If no candidate receives that, a runoff would determine the winner.

The law itself hasn’t deterred Black candidates from trying to run, said Derrick Johnson, CEO and president of the NAACP, but “the viability of winning statewide is daunting.”

“It is very difficult in the state to build the type of campaign financially to compete when you have to persuade 20 to 25% of the white voters to vote for a Black candidate,” Johnson added. “Blacks are willing to vote for white candidates, but we have not seen whites, in large part, promoting and supporting Black candidates from the state.”

Johnson said the state’s history of “racial bloc voting” has been a greater deterrent for Black candidates than the current election law.

“Whites in this state have not shown a willingness to support a well-qualified candidate over a subpar white candidate,” said Johnson. “So they will vote in a bloc based on racial lines, not qualification.”

That was the case in two recent national elections. Barack Obama never won Mississippi, losing to John McCain in 2008 and again to Mitt Romney in 2012 — both times by double digits. According to exit polling data, white voters in 2008 voted against Obama by an 8-to-1 margin that increased to nearly 9-to-1 in 2012.

Mississippi structured its statewide elections in this way to disenfranchise Black voters — and framers did not disguise those intentions.

After the Civil War, Black men began gaining political power in Mississippi in the era of Reconstruction. During that time, Mississippi’s legislature appointed the nation’s first and second Black senators, along with a handful of Black officials to state offices, one reaching as high as lieutenant governor.

MORE: Timeline: Voter suppression in the US from the Civil War to today

Some white Mississippians saw this as a threat and devised a plan to dilute Black voting power and maintain their control of state politics. In 1890, they redrafted the state constitution, deploying an arsenal of Jim Crow-style measures — from literacy tests to poll taxes — that ultimately erased recently gained Black political power.

According to the journal of the proceedings of the constitutional convention, framers explicitly stated the purpose of the convention was “to secure to the State of Mississippi ‘white supremacy.'”

“At that same time, the state’s House districts were also created,” Wade said. “It’s a puzzle to people from the outside. But if you’re within the state, you will see how those pieces fit neatly together.”

The results were immediate.

Before the 1890 constitution, 50% of qualified Black Mississippians were registered to vote. By 1899, that number plunged to 5%.

Mississippi has had two Black senators. In 1870, Hiram Rhodes Revels was chosen by state legislators to complete the term of Albert G. Brown, who resigned when the state seceded from the union. A few years later, Blanche K. Bruce became the state’s second African American senator, serving from 1875 to 1881. U.S. senators weren’t elected by popular vote until the 17th Amendment was ratified in 1913.

Four Black plaintiffs, represented by voting-rights groups, filed a federal lawsuit last May to challenge the process. They argue the law is racially discriminatory and violates the Voting Rights Act of 1965, the 14th Amendment and the “one-person, one-vote” rule.

The “electoral vote rule,” as they deemed it in the filing, “creates a system in which white-preferred candidates can win a majority of House districts with a smaller percentage of the statewide popular vote than would be required of an African American-preferred candidate.”

Days before last year’s governor’s race, which many anticipated might be thrown to the Mississippi House for a decision, U.S. District Judge Daniel Jordan wrote he had “grave concern” about the constitutionality of the process but wouldn’t immediately block it. Instead, he would allow the state the opportunity to remedy the situation with a vote instead.

After winning reelection last November, Republican Secretary of State Mike Watson said he supported getting rid of the current system, which led to optimism for state representatives like freshman Rep. Zakiya Summers, D-District 68.

But the official vote to put the measure on the ballot comes at a time of racial unrest across the country linked to police killings of African Americans, and not far removed a controversial vote to retire Mississippi’s state flag that included the Confederate flag emblem. Summers said those issues go hand in hand.

MORE: ‘Apartheid and Jim Crow are really no different’: Why George Floyd’s death reverberated in Africa

“We know what the Confederate flag stands for, and that doesn’t represent Mississippi anymore. And then you also look at this process, that doesn’t represent us anymore, either,” Summers told ABC News. “As a result of the unfortunate murder of George Floyd, systemic racism and racial inequality has been elevated in a way that we haven’t seen in, you know, 50 or 60 years. It shouldn’t be another 50 or 60 more years before we’re able to have a Black governor in Mississippi.” 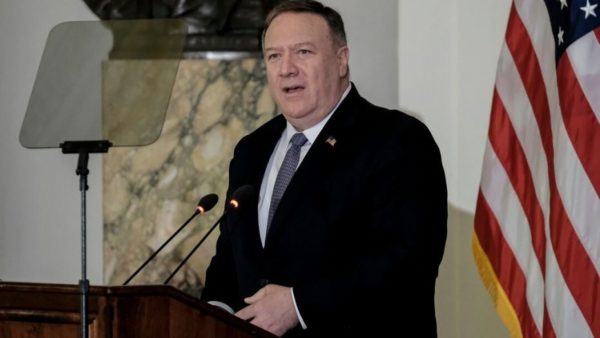 Pompeo warns governors of Chinese infiltration into US: ‘It’s happening in your state’ – Fox News