With an abundance of polls favoring Joe Biden, is Wisconsin still up for grabs? – Madison.com

<a href="https://madison.com/wsj/news/local/govt-and-politics/with-an-abundance-of-polls-favoring-joe-biden-is-wisconsin-still-up-for-grabs/article_e0a10c39-2c0a-528b-adf5-aaabee73d6eb.html" target="_blank" rel="noopener noreferrer">With an abundance of polls favoring Joe Biden, is Wisconsin still up for grabs?</a>  <font color="#6f6f6f">Madison.com</font>

With an abundance of polls favoring Joe Biden, is Wisconsin still up for grabs?

For most of the year, pollsters and pundits have said the presidential race in Wisconsin would turn on a dime, especially given the razor-thin margins in recent elections.

But with an abundance of more polling this year than in 2016 giving Democratic presidential candidate Joe Biden a consistent edge over Republican President Donald Trump, is the race for Wisconsin’s 10 electoral votes really that close?

Polling experts interviewed by the Wisconsin State Journal said that while Biden is the favorite to win as of today, people should still view current polling with caution.

“We all ought to be wary this year,” said Larry Sabato, founder and director of the University of Virginia Center for Politics and Sabato’s Crystal Ball. “It’s not PTSD, it is appropriate caution. We need to remember how flawed these instruments can be under the right set of circumstances. What are those circumstances? You never know in advance.”

Appropriate caution, however, doesn’t mean this year’s polling should be discounted. Sabato said pollsters have made a lot of strides since 2016, when state level polls notoriously missed the election outcome in Wisconsin and other crucial swing states.

Among the changes many pollsters have made since 2016 include increasing the amount of polling in important swing states including Wisconsin and accounting for poll respondents’ education level to adequately account for white non-college-educated voters.

There were 70 head-to-head presidential polls conducted in Wisconsin during the entirety of the 2016 presidential year, according to poll aggregator FiveThirtyEight. So far in 2020 there have been at least 185, including the latest from the UW-Madison Elections Research Center and the Wisconsin State Journal.

Sabato said the sheer number of Wisconsin polls this year breeds confidence in the ability of the polls to describe the state’s current political environment.

Still, Ashley Koning, director of the Eagleton Center for Public Interest Polling at Rutgers University, said polling consumers should exercise discretion, and understand that polling isn’t a predictor of election outcomes as much as a gauge of what’s happening when the polls were conducted.

“While frequency and consistency matter to some extent, I think what matters even more so is what is under the hood of some of these polls,” Koning said.

Many pollsters are also weighting for education, something that many didn’t do in 2016, which could partly explain how FiveThirtyEight gave Hillary Clinton a 5.3 percentage-point edge in Wisconsin in the lead-up to Election Day 2016 and an 83.5% chance of winning the state. Trump won by less than 23,000 votes.

He said Biden is amassing more support than Clinton did in 2016 in counties in the Milwaukee media market outside of Waukesha, Ozaukee and Washington counties.

This election year’s polling is also showing fewer undecided and third-party voters than in 2016, many of whom broke for Trump at the last minute.

Additionally, Trump is the incumbent this year, whereas there was no incumbent in 2016.

“With an incumbent seeking re-election … there’s always less uncertainty because you know who they are and how they’ve governed,” Franklin said.

Trump also has the smallest variability in his approval rating of any president since pollsters began asking the question, reflecting the intense partisan nature of contemporary American politics.

Pollsters also say polling up until Election Day will be important to accurately estimate the vote, since pollsters largely missed the 11th-hour shift to Trump among independent voters in 2016.

This past week’s UW-Madison poll shows Biden with a 50% to 46% lead over Trump among likely voters, a figure still within the poll’s margin of error.

“Given the number of polls that have been taken by very reliable groups in and out of Wisconsin, and the fact that almost all show a relatively close race but with Biden ahead, the appropriate terminology is to say, based on what we know today, ‘Biden is more likely than not to win Wisconsin,’” said Sabato, whose Crystal Ball ratings have kept Wisconsin among a small number of “toss-up” states all year. “To me that’s it, you really can’t go much beyond that.”

Though many Wisconsin polls are technically within the margin of error, Biden has maintained a consistent lead in polling averages since April, the last time Biden and Trump were tied, according to FiveThirtyEight’s polling average for the state, weighted by polling quality.

“The data has been unbelievably stable,” said Democratic pollster Paul Maslin. “Essentially, it’s a judgment about Donald Trump that has not changed.”

Maslin said this year’s election is a vastly different scenario than in 2016. Voters generally disliked both candidates, and when they had to make a choice, broke for Trump, who Maslin said represented a change over Clinton, who may have been perceived as the status quo candidate.

“This is an utterly different dynamic, where the national mood is as negative as I’ve seen it in a presidential year,” Maslin said.

Despite the recent U.S. Supreme Court vacancy and the ongoing COVID-19 pandemic, Maslin said he simply doesn’t see any major event that would significantly change polling numbers given that attitudes toward Trump have hardly shifted, not even this upcoming week’s first of three televised debates between Trump and Biden.

“He’s stuck and his numbers aren’t budging any,” Maslin said.

Republican strategist Scott Jensen agreed that Biden currently has a slight edge in the state, but that Trump could win the election by focusing on the suburbs of Milwaukee, and especially independent voters.

“If the president is able to press his advantage on the economic issue with independent voters, he can continue to make up ground there,” Jensen said.

The Election Research Center’s latest poll shows Trump doing the best among voters who say they live in a suburb, with the president garnering 57% support there, compared to 37% support for Biden.

Trump is doing the worst among voters who say they live in a big city, with 81% of such voters opting for Biden, and just 17% for Trump. Fifty-three percent of rural voters say they support Trump, and 45% support Biden. In small cities, Biden leads 55% to Trump’s 41%; and in small towns, Trump leads 50% to Biden’s 47%.

In 2016, Trump won Waukesha, Ozaukee and Washington counties in suburban Milwaukee with 61% to 33% for Clinton.

Franklin said combining polls from May, June, August and September of this year found Biden holding a roughly 5% lead over Trump statewide. However, the suburban Milwaukee counties still showed GOP voters up about 58% to Democrats’ 33% in the combined polls.

“What that says to me is the WOW counties actually are lining up pretty similar to the way they voted in 2016, with the unknown factor of how many of that 9% may be Republican-leaning people who come home for Trump and boost him, versus those who are either genuinely undecided or potentially don’t like either of these candidates,” Franklin said. “That was a big deal in 2016, of course. It’s less this year.”

The Elections Research Center poll shows 59% of voters in the WOW counties support Trump over Biden’s 35%, though the sample size is small.

Barry Burden, a UW-Madison political science professor and ERC director, said if that figure is correct, the margin is lower than what Trump likely needs for a statewide victory.

Franklin said there are signs of a shift in the suburban Milwaukee counties. Trump secured a smaller margin four years ago than Mitt Romney did in 2012, former GOP Gov. Scott Walker secured a smaller margin in his 2018 re-election campaign compared with his 2014 effort, and the margin for all three GOP candidates in Supreme Court races since 2016 has been consistently smaller than the narrow 2011 court race.

Franklin said the shift may not have major implications if both parties manage to run up their numbers in other parts of the state. For Republicans, that could come down to more rural parts of the states that lean conservative, while Democrats will look to liberal communities like Madison and Milwaukee.

“If you take away 20,000 votes statewide because the three WOW counties are not quite as red as they used to be, that can be consequential statewide,” Franklin said. “It won’t matter in every election. In a landslide, it doesn’t make much of a difference, but in close races it does.”

Another reason Biden’s lead could be tenuous is Trump’s support among independents.

Though Biden leads among independent voters 51% to Trump’s 42%, the second most important issue for independents is the economy, with 17% rating it as their top issue.

“This suggests that a focus on the economy might be a way for Trump to gain ground on Biden,” Burden said.

Burden said that unlike Democrats, independent voters rate Trump somewhat positively on the economy, with 35% approving and 11% somewhat approving. 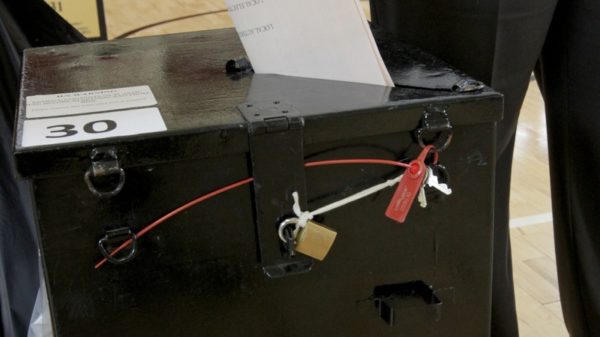 Call for support of migrants to enter politics – RTE.ie