Experts worry as US virus restrictions ease; Pelosi says House will stay until relief deal made

Members of the Wyoming Republican Party voted to censure a member of its Natrona County delegation over the weekend for her role in helping to found a nonpartisan political action committee that gave money to a number of Democratic candidates around the state.

JoAnn True – the Natrona County GOP’s state committeewoman – became the first person censured by members of her party in years. The decision came at the party’s meeting in Worland over the weekend and was centered on her founding role in the Cowgirl Run Fund: a political action committee looking to increase female representation in office, regardless of political affiliation.

Though the fund includes a bipartisan group of founders and donated to a dozen Republicans this cycle, True was ultimately censured by her peers for the committee’s support of roughly 13 Democratic candidates around the state; several of whom are in competitive races against Republicans this cycle. The group is also backing numerous women for nonpartisan positions in municipal and county government.

This was egregious enough that Uinta County Republican Party Chairman Karl Allred – a losing statehouse candidate this cycle who was voted out of his precinct spot on the county party last month – brought a motion to censure True. That was ultimately adopted 36-25, according to sources.

“They voted for this action due to Joann’s commitment, in her personal and private life, to encourage women to become involved in politics in Wyoming,” Natrona County Republican Party Chairman Joe McGinley wrote in an email to members of the county party Monday night. “Joann participates in a non-partisan organization, the Cowgirl Run Fund, which helps support and mentor women in Wyoming to become involved. Their mission statement is: ‘Our mission is to help elect more women so that women’s voices are present in shaping public policy. Our goal is to build a pipeline of women who are seasoned in political leadership.’ I guess encouraging woman to become involved is seen as a threat to a majority of the State Party Central Committee.”

“Gender is what I believe is the flashpoint here,” she said. “Plenty of other PACs give in a bipartisan fashion, and plenty of PACs have made efforts to unseat incumbents this cycle. This was a broad-based nonpartisan effort to encourage women to run for office because women’s voices are underrepresented at every level in elected office. Unfortunately, we’re being pulled in a direction that sees this as a bad thing when it’s actually a huge victory.”

Frank Eathorne, the chairman of the Wyoming Republican Party, did not respond to a request for comment Monday afternoon, and a news release recapping the event Monday night made no mention of who was censured.

However, Marti Halverson, the party’s outgoing national committeewoman and a former Wyoming legislator, addressed the censure in an op-ed sent to the Star-Tribune that, according to metadata, was written Monday morning.

“Having served in the Wyoming House for six years, I can attest that women are superbly represented,” wrote Halverson, one of slightly more than a dozen women in the 90-person Legislature during her final year in office. “The men are husbands, sons, and fathers of daughters, and they hear from the women in their lives frequently on the issues before the legislature.  ‘Woman’s issues’ are always well addressed.”

“Cowgirl Run Fund has succumbed to the gender-shaming heaped upon Wyoming by the mainstream media and progressive, so-called, ‘woman’ organizations that bemoan the small number of female legislators, and other electeds, in this state,” she added.

True, who like the rest of the Natrona County delegation did not attend the meeting, had no other details, and said in a text message she was working with her attorney to gather more information. As of Monday night, she said she had not been notified directly of her censure by party officials.

While it is unknown when the party last censured one of its members, the most recent attempt came against Casper Republican Pat Sweeney earlier this year, though that effort went nowhere.

The most notable attempted censure effort came against Gov. Matt Mead in 2014 after he signed the controversial Senate File 104 following the 2013 legislative session, which removed Superintendent of Public Instruction Cindy Hill as head of the Wyoming Department of Education. That effort ultimately failed as well.

While the Natrona County GOP has no immediate action plan to address the censure, McGinley said the party plans to update its members on additional action at its next executive committee meeting at Casper’s Ramkota Hotel on Sept. 28.

In at least two committee meetings of the Wyoming Legislature this interim, state lawmakers invoked unfounded conspiracy theories about the pandemic.

The Wyoming Republican Party will be withholding funding from any GOP statehouse candidates who do not commit to supporting the party platform 80 percent of the time.

Editorial board: We must push back against the rising tide of polarization

The editorial board says: If we continue to become more polarized, we’ll lose an essential part of what it means to be a Wyomingite.

Wyoming is the Equality State. Is this the year it finally starts living up to its name?

Wyoming was the first state to grant women the right to vote but elects relatively few women. Tuesday’s primary was different, with female politicians making serious gains. Is it a sign of things to come?

Far right pulls off number of upsets in Wyoming primary, while moderates stave off complete shift in Legislature 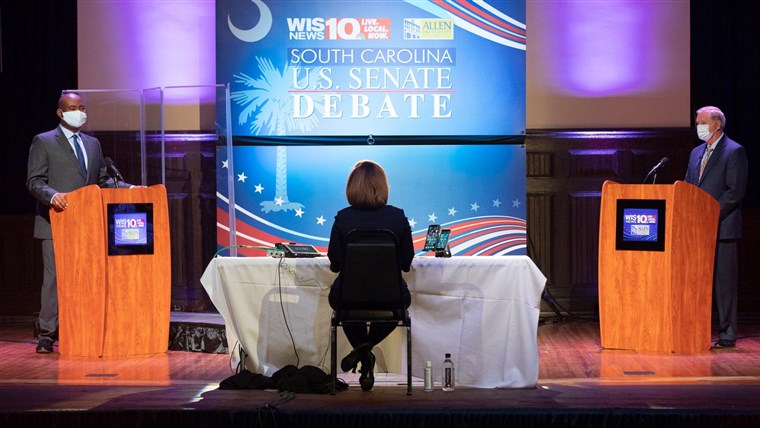