What Can We Learn From Rival Political Ads in Florida? – The New York Times

It’s that most central and chaotic of swing states, home to the hanging chad, the most recent statewide Senate recount, and already more than $200 million in television and radio political advertising in 2020.

We’re talking, of course, about Florida.

It’s perhaps the most harshly contested state between President Trump and Joseph R. Biden Jr., the Democratic presidential nominee. Recent polls have shown Mr. Biden maintaining a slight lead over Mr. Trump — a Monmouth University poll had Mr. Biden at 50 percent with likely voters to Mr. Trump’s 45 on Tuesday — but the margin of the race in Florida is expected to be razor thin. Mr. Trump carried the state by 113,000 votes in 2016.

Since July, the campaigns have been spending more on Florida’s airwaves than anywhere else in the country. So far, the Trump campaign has spent $57.5 million and the Biden campaign has spent $63.7 million, including reservations through November, according to Advertising Analytics, an ad tracking firm. And Michael R. Bloomberg has pledged to spend $100 million in the state to support Mr. Biden.

But with the campaigns largely grounded by the coronavirus pandemic, Florida television screens are increasingly the primary method, along with digital advertising, by which campaigns are making their arguments to voters, and a look at both campaigns’ recent advertising strategies reveals how they view their current standing in the Sunshine State.

Though the Biden campaign has been flexing their financial muscle recently with a ubiquitous ad presence across the country, it is the most expansive in Florida, where the campaign has more than two dozen unique on-air advertisements in different markets around the state over the past week.

The most common message in Mr. Biden’s advertising in Florida is a familiar one for Democrats: health care. He spent about $600,000 on one ad over the past week that retells the emotional tragedy of losing his wife and daughter in a car accident as he was sworn into the Senate, and how critical health insurance was to the care of his two sons. Two other ads, each supported by about $300,000 over the past week in Florida, link Mr. Biden’s health care proposals to helping bring the country out of the pandemic.

The Biden campaign is also clearly concerned about maintaining its lead over Mr. Trump among Latino voters. Though the campaign has spent $4 million on Spanish language ads in Florida since June, $1.1 million of that has come in the past two weeks, according to Advertising Analytics.

A pair of Spanish language ads by the Biden campaign currently on air in Florida directly rebut attacks by Mr. Trump — evidence of a concern about the effectiveness of the president’s accusations — and even embrace some of Mr. Biden’s more progressive policies, such as raising taxes on the wealthy. “Trump talks a lot, but he’s done little,” both ads claim.

For Mr. Trump, who took a brief break from the airwaves during the Republican National Convention, his campaign’s focus appears to be on two key groups in the state: seniors and Latino voters.

Of the four Trump ads currently on air in Florida, one deals directly with Social Security. In that ad, the Trump campaign falsely portrays Mr. Biden as a candidate who wants to cut Social Security (Mr. Biden’s proposal calls for expanding the program and raising taxes on the wealthy to pay for it).

Playing to his base by sowing nativist fear about undocumented immigration has been core to Mr. Trump’s political playbook since his rise in 2015. But it hasn’t necessarily damaged his support among Latino voters in Florida. Though he trails Mr. Biden significantly among Latinos in Florida — the Monmouth poll found Mr. Biden with a 58 to 32 percent edge — that also comes as the state’s Latino population has grown, and suggests Mr. Trump has made inroads with some Latino voters in Florida.

To that end, the Trump campaign has been spending heavily on Spanish language ads in Florida, $3.2 million since the start of August and $426,000 this week, according to Advertising Analytics. The Spanish language ad currently on air in Florida focuses heavily on the economy, saying that wages under the Obama administration remained stagnant, while Mr. Trump has raised overall wages. And it features a news clip claiming more Latino jobs had been created (Hispanic unemployment jumped from 4.8 percent in February to 14.5 percent in June, according to the Pew Research Center).

Both campaigns have millions in ads booked in the state through November, and will most likely keep adding millions more. Voting begins in Florida with the distribution of absentee ballots on Sept. 24.

Michael Caputo takes a leave of absence from the Health Department after erratic rants.

An Iowa Republican uses the transitive property to tie his opponent to Ocasio-Cortez and Pelosi.

North Carolina Election Shows How Political Lines Are Drawn. And They Are Fixed. – The New York Times 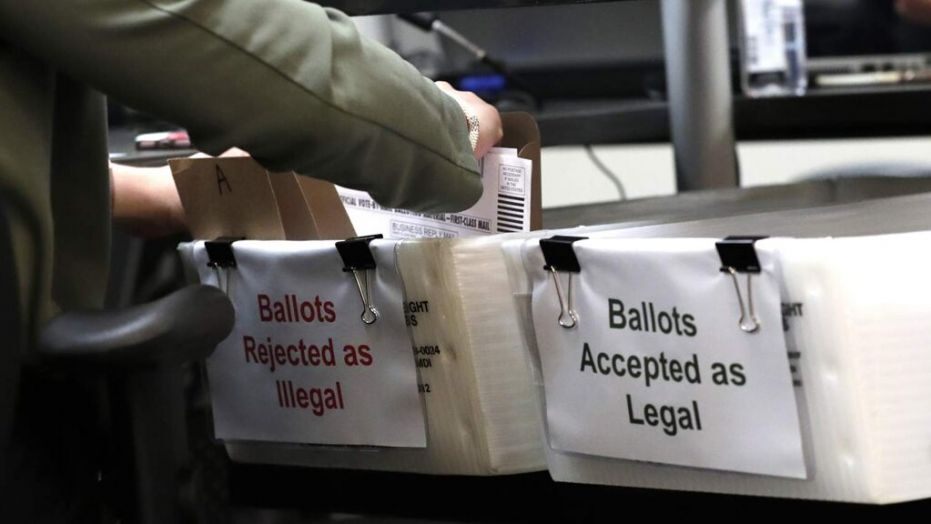