“If he could just not talk. The stuff that he says is just embarrassing,” Oswald said, shaking her head as she stands outside the salon where she works as a hairstylist here. “But I do think he has done some great things for our economy.”

In a divisive and contentious election season, Oswald is something of a political unicorn: She’s a true undecided voter. And she plans to cast a ballot for the first time, at age 40, after becoming awakened to politics by the pandemic that left her unemployed for two months.

“I didn’t trust myself being informed enough in the past,” Oswald said, explaining why she has never voted. “But because of all of this, I had to stay home, we’re all watching the news, we’re all watching TV, I feel like I can inform myself this year to make the right choice in my mind.”

Oswald is one of more than 1.3 million new voters who have registered in North Carolina since 2016, when Trump narrowly won the state by about 173,000 votes. Her upbringing in a conservative Republican family, she said, allows her to keep more of open mind toward Trump, even as she tries to learn more about the Democratic ticket.

So far, she said, she’s not sold on Democratic presidential nominee Joe Biden either.

“He’s been in office for so long and he really hasn’t done a whole lot,” Oswald said, admitting her unfamiliarity with Biden’s long record. “He was the vice president and what did he do? I don’t know. It’s hard.”

Voting is already underway across North Carolina, with more than 700,000 absentee ballots being sent out over the past week to the voters who requested them. And 17 days of in-person, early voting is set to begin on October 15.

Both options have accelerated an already frenzied final stretch of the campaign. One of the nation’s most competitive Senate races, which could help determine whether Democrats win control of the US Senate, is also on the ballot, along with a key governor’s contest.

Hanging over it all is the coronavirus pandemic, which is influencing how — and for whom — people are voting. Or if they decide to vote at all.

It was the third presidential trip to North Carolina in the last three weeks. His visit was followed by separate trips from three of his children — Don, Jr., Eric and Ivanka — all of whom passed through the state on campaign or official government stops.

The collective Trump itinerary, along with recent visits from Vice President Mike Pence and members of the Cabinet, underscores the critical importance of the state’s 15 electoral votes to the president’s bid to win a second term.

Without North Carolina, Republicans acknowledge, Trump faces a difficult path to 270 electoral votes. Barack Obama carried the state narrowly in 2008, but it has long been reliably Republican.

At the end of a challenging week for the President, where his own blunt words about the deadly severity of coronavirus to the legendary journalist Bob Woodward became a new flashpoint, his supporters are unwavering.

“I think people can look beyond that noise,” said Sarah Reidy-Jones, vice chairman of the Mecklenburg County Republican Party. “Frankly, his record of accomplishment will stand.”

She and other friends who belong to the Uptown Charlotte Republican Women’s group discussed the presidential race and local politics at a beer garden this week. The revelations that the President made to Woodward, several women said, did not change their view about Trump.

Reidy-Jones admires Trump now more than four years ago — in part, she said, because of the judicial appointments he’s made during his first term.

“Four years ago, President Trump wasn’t my first, second, third or fourth choice,” she said, noting she was uncertain whether he would be a true conservative or live up to his word, which she believes he has. “Put the personality aside and see who has been a strong leader for us.”

That record does not sit well with Blake Stewart, the co-owner of a downtown bar, who believes the President’s leadership on coronavirus has been appalling.

“He had the opportunity to grab this bull by the horns, but instead he let it run us all over,” Stewart said. “He abdicated his responsibility at the outset. If he had said, ‘Let’s take a strong lockdown approach and everything should be closed for two and a half months,’ we wouldn’t be in this situation.”

His business is still closed. For that, he said, he blames Trump, not Gov. Roy Cooper, a Democrat.

Conversations with more than two dozen voters this week, however, revealed a mixed view on who is responsible for the economic fallout from the pandemic. Cooper, who has taken a far more aggressive posture than most southern Republican governors, also received his share of criticism, particularly from Republicans, but also from some independent voters.

The interviews suggested the politics of coronavirus can be contradictory and awash in uncertainty heading into November.

Not for Bakarr Kanu, a college professor, who received his absentee ballot in the mail this week.

He said the President’s rejection of science and his overall conduct in office made his choice clear. He believes it’s time for a change in the White House and said he would return the ballot to the county election office by hand, so he could be certain it would be properly counted.

“Everything is on the line this year,” Kanu said. “These are very trying times. In the future, we will be asked what did you do when all of this was going on?”

As he looked over the ballot that he requested, reading the instructions carefully and taking note that a witness and a signature is required, he dismissed any talk of potential voter fraud. He said he believes Trump is trying to intimidate voters.

The President’s supporters here are already echoing Trump’s baseless claims meant to undermine the election’s legitimacy. In one interview after another, Republican voters said they worried about the potential for voter fraud and said they intended to cast their ballots in person. Voter fraud in the United States is extremely rare.

“I am concerned about the mail-in ballots,” said Don Scarborough, a mortgage banker. “If we all can go to Walmart and Lowe’s, we also can stand in line to vote.”

As he walked into a Trump rally here this week, which marked the first time he would see the President in person, he said he believed Trump had done “an above average job, given the circumstances and the challenges he’s had.”

Scarborough, like most every other Trump supporter interviewed in North Carolina this week, expressed his exhaustion at the President’s often bitter tone on Twitter.

“I don’t like the fact that he tweets so much,” he said. “And sometimes he takes too hard of a position against folks that he disagrees with.”

Asked what he thought about the prospect of a Biden presidency, and whether it scared him as much as Trump suggests it should, Scarborough paused for a moment.

“Just like anything, we would live through it,” he said. “Whether you agreed with the previous administration or not, we all lived through it. I just don’t think it would be the best thing for the country.”

There’s little question that Trump loyalists here are fired up.

The Trump campaign and the Republican National Committee have collectively knocked on nearly 1 million doors and made six million phone calls across North Carolina this year, party officials say, along with organizing supporters at the President’s scaled-back rallies.

Yet there are also signs he’s awakening the other side.

A downtown business owner here, who did not want to be identified by name, said he has rarely voted in presidential races, but he would cast his ballot for Biden in hopes of blocking Trump from winning a second term. He believes the divisiveness under Trump, particularly during a summer of racial unrest, is dangerous for the country.

“I know a lot of people like me,” he said. “We are the silent majority.”

The Trump presidency motivated Angela Levine to become politically active for the first time. She said she had never done much more than vote, but she has spent most of the last four years volunteering with the county Democratic Party, with an eye toward defeating Trump.

But she worries whether Democrats are doing enough.

“There are a lot more Democrats here now than you think,” Levine said, sitting in a park overlooking new houses that didn’t exist four years ago, a sign of a rapidly growing North Carolina. “The biggest thing is just getting those folks who may be considering not participating at all. Those are the ones I worry the most about.” 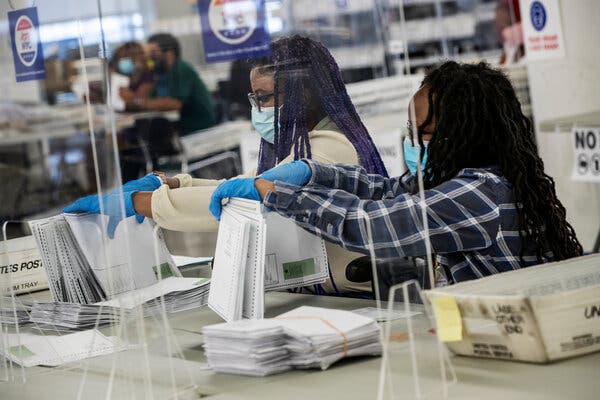 The Householder bribery scheme unveiled millions in secret spending. But dark money has been in Ohio for a while. – Cincinnati.com