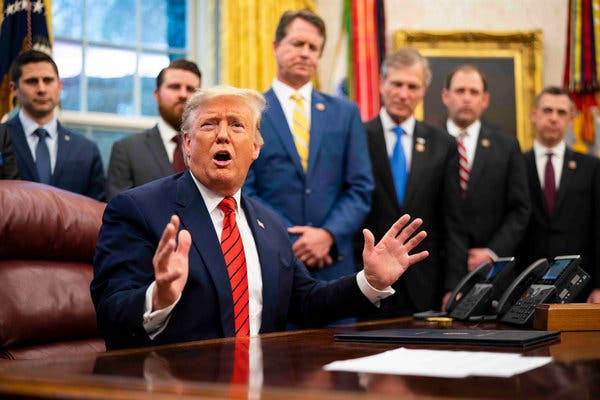 WASHINGTON — As far as President Trump is concerned, banishing Lt. Col. Alexander S. Vindman from the White House and exiling him back to the Pentagon was not enough. If he had his way, the commander in chief made clear on Tuesday, the Defense Department would now take action against the colonel, too.

“That’s going to be up to the military,” Mr. Trump told reporters who asked whether Colonel Vindman should face disciplinary action after testifying in the House hearings that led to the president’s impeachment. “But if you look at what happened,” Mr. Trump added in threatening terms, “I mean they’re going to, certainly, I would imagine, take a look at that.”

This is an unsettled time in Mr. Trump’s Washington. In the days since he was acquitted in a Senate trial, an aggrieved and unbound president has sought to even the scales as he sees it. Colonel Vindman was abruptly marched by security out of the White House, an ambassador who also testified in the House hearings was summarily dismissed, and senior Justice Department officials on Tuesday intervened on behalf of Mr. Trump’s convicted friend, Roger J. Stone Jr., leading four career prosecutors to quit the case.

More axes are sure to fall. A senior Pentagon official appears in danger of losing her nomination to a top Defense Department post after questioning the president’s suspension of aid to Ukraine. Likewise, a prosecutor involved in Mr. Stone’s case has lost a nomination to a senior Treasury Department position. A key National Security Council official is said by colleagues to face dismissal. And the last of dozens of career officials being transferred out of the White House may be gone by the end of the week.

The war between Mr. Trump and what he calls the “deep state” has entered a new, more volatile phase as the president seeks to assert greater control over a government that he is convinced is not sufficiently loyal to him. With no need to worry about Congress now that he has been acquitted of two articles of impeachment, the president has shown a renewed willingness to act even if it prompts fresh complaints about violating traditional norms.

“The president is entitled to staffers that want to execute his policies, that he has confidence in,” said Robert C. O’Brien, the national security adviser, who supervised Colonel Vindman and his brother, Yevgeny Vindman, also an Army lieutenant colonel, who was dismissed last week from the National Security Council staff even though he did not testify in the House hearings. “We’re not a banana republic where lieutenant colonels get together and decide what the policy is.”

The president’s involvement in Mr. Stone’s case generated vigorous protests and calls for an investigation into whether he improperly sought to skew the prosecution in favor of a longtime associate and adviser. Hours after Mr. Trump’s tweets criticizing the Justice Department for seeking up to nine years in prison for Mr. Stone, the department reversed gears and said it would ask for a lesser sentence.

The Justice Department rejected any link to the president’s tweets, while Mr. Trump insisted that he had nothing to do with the case. But the withdrawal of the four career prosecutors working on the case left the unmistakable impression that they thought something improper had happened.

“The American people must have confidence that justice in this country is dispensed impartially,” Senator Chuck Schumer of New York, the Democratic leader, wrote in a letter asking the department’s inspector general to investigate. “That confidence cannot be sustained if the president or his political appointees are permitted to interfere in prosecution and sentencing recommendations in order to protect their friends and associates.”

Mr. Trump has repeatedly railed against law enforcement agencies for targeting his associates. Among those who have been convicted are Paul Manafort, his former campaign chairman; Michael T. Flynn, his former national security adviser; and Michael D. Cohen, his personal lawyer. “The real crimes were on the other side, as nothing happens to them,” he wrote on Twitter shortly after midnight Tuesday morning.

By the evening, he was demanding to know why the Democratic power broker Tony Podesta had not been prosecuted and expanded his attack to Judge Amy Berman Jackson, who is presiding over Mr. Stone’s case.

“Is this the Judge that put Paul Manafort in SOLITARY CONFINEMENT, something that not even mobster Al Capone had to endure?” he wrote on Twitter, providing a false version of her role as well as his treatment. “How did she treat Crooked Hillary Clinton?”

Mr. Trump has long suspected that people around him — both government officials and even some of his own political appointees — were secretly working against his interests. His impeachment for trying to coerce Ukraine to incriminate Democrats by withholding $391 million in security aid has only reinforced that view as he watched one official after another testify before the House.

Witnesses like Colonel Vindman testified under subpoena compelling them to talk, but Mr. Trump blamed them for his dilemma. In the Oval Office on Tuesday, Mr. Trump complained at length about Colonel Vindman, accusing him of misleading Congress about the president’s July 25 phone call with his Ukrainian counterpart. In fact, Colonel Vindman’s version of the call closely tracked the written record released by the White House, but he did testify that he thought it was inappropriate to ask a foreign country to tarnish the president’s domestic political opponents.

“We sent him on his way to a much different location, and the military can handle him any way they want,” Mr. Trump said. “General Milley has him now,” he added, referring to Gen. Mark A. Milley, the chairman of the Joint Chiefs of Staff. “I congratulate General Milley. He can have him. And his brother, also. We’ll find out. We will find out. But he reported very inaccurate things.”

Others involved in the impeachment process may also pay a price. The administration plans to withdraw the nomination for Pentagon comptroller of Elaine McCusker, a Defense Department official who questioned the aid freeze, The New York Post reported. While the Senate has not been notified of such a move, an administration official said it was likely to happen after budget hearings this week.

Ms. McCusker could not be reached for comment, and a Pentagon official referred questions to the White House, which had no comment. Senator James M. Inhofe, Republican of Oklahoma and the chairman of the Senate Armed Services Committee, told reporters that he had “a feeling everything is going to be fine with the nomination.” But friends of Ms. McCusker said she was aware that her nomination was in jeopardy.

Just Monday, Ms. McCusker was the one left explaining the wielding of another Trump administration ax. Appearing before reporters in her role as the Defense Department’s acting comptroller, she sought to describe why the Pentagon was proposing to eliminate the $7 million subsidy to Stars and Stripes, a newspaper for American troops.

“We have essentially, decided that, you know, kind of coming into the modern age, that newspaper is probably not the best way that we communicate any longer,” she told reporters.

Another political appointee who may lose a nomination is Jessie K. Liu, who served as United States attorney for the District of Columbia when her office prosecuted Mr. Stone, Mr. Manafort and other high-profile cases.

She stepped down in December, when Mr. Trump nominated her to be the under secretary of the Treasury for terrorism and financial crimes. But on Tuesday, the White House withdrew her nomination, a person familiar with the matter said.

At the White House, Victoria Coates, a deputy national security adviser, has twisted in the wind amid feverish speculation about whether she would be pushed out. She has been the subject of a whisper campaign suggesting that she is the anonymous author of a book about being a member of the resistance inside the administration — which prompted the literary agents for the actual author to deny the claims.

Mr. O’Brien, Ms. Coates’s boss at the National Security Council, rejected the speculation in an appearance on Tuesday at the Atlantic Council. “This town is amazing when it comes to whispers,” he said, adding he did not know who the author was. “I think writing ‘Anonymous’ is inconsistent with working at the White House or working at the N.S.C., so whoever wrote ‘Anonymous’ probably shouldn’t be there.”

But Mr. O’Brien is presiding over a broader housecleaning at the National Security Council. Since being appointed last fall, he has said he wants to shrink the staff to closer to what it was under President George W. Bush. At the Atlantic Council appearance, he said he would be finished “by the end of the week” reducing the staff of policy professionals to 115 or 120 from the 175 when he took over.

The ousted officials were detailed from elsewhere in the government like the C.I.A., the Pentagon or the State Department and are returning to their home agencies. According to an administration official, the original plan was to use this downsizing as cover to remove Colonel Vindman as well without looking like a reprisal.

But in the end, the president did not want cover. He wanted to send a message — a message that Washington has received.

Team Players in Politics and Love – The New York Times

Why Is the Iowa State Fair So Important? – The New York Times