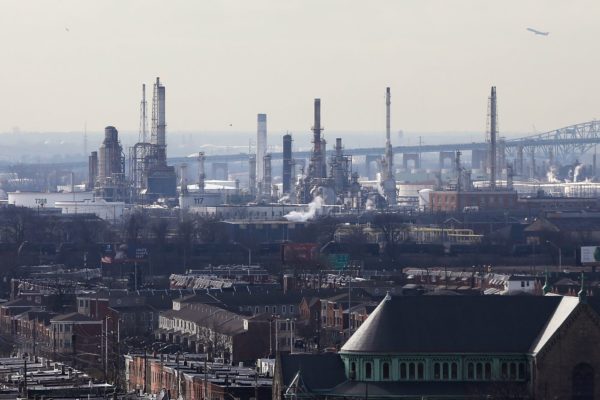 When Vice President Mike Pence rolled into Philadelphia last week, he was greeted by hordes of sign-wielding activists.

But they weren’t all there for the same reason.

The dueling demonstrations were the latest reflection of tensions between building trades unions and liberal activists. The building trades wield enormous political influence in Philadelphia Democratic circles and want refinery jobs restored. Environmentalists want to permanently close the refinery as part of their campaign against climate change and air pollution.

That makes the political calculus around the refinery fraught for elected officials, many of whom depend on support from both labor unions and progressive groups.

» READ MORE: Vince Fumo’s old district is the scene of the latest battle between old and new Philadelphia politics

Get the news you need to start your day

The future of the 1,300-acre PES refinery has been in flux since last summer, when it shut down after a massive fire and later declared bankruptcy. On Wednesday, a U.S. Bankruptcy Court could approve a proposed reorganization plan that would sell it off to Chicago-based Hilco Redevelopment Partners, which says it would turn the site into a mixed-use industrial complex.

Some labor leaders want the site to be sold to a bidder that would return it to oil processing, which they say is the only way to provide their members with the 1,000 or so high-paying jobs lost after the blaze.

Those union leaders have found support in the Trump administration. Working with Peter Navarro, assistant to the president for trade and manufacturing policy, they have asked the White House to assert that closing the East Coast’s largest oil refinery would make the United States too dependent on foreign oil.

John J. Dougherty, leader of Local 98 of the International Brotherhood of Electrical Workers, said Tuesday that the refinery can be modernized and reopened quickly, pushing an ordinance to end its use of hydrogen fluoride, a toxic chemical that can pose a health threat when released in high concentrations.

And Mayor Jim Kenney said Tuesday that legislation banning hydrogen fluoride in refinery operations and petroleum processing will be introduced in City Council this week.

Energy policy has become an awkward fault line for these traditionally Democratic bases in Pennsylvania. This week, state trade unions criticized Gov. Tom Wolf, a Democrat, who plans to veto a bill that would give tax breaks to new petrochemical manufacturers that use state natural gas and also create at least 800 jobs.

In Western Pennsylvania, labor unions and environmental activists have clashed over proposals to ban fracking. Some union leaders there have said they would sooner support Trump before backing Sens. Bernie Sanders or Elizabeth Warren, who have called for a fracking ban.

Even some of the most liberal Pennsylvania politicians have said a fracking ban would “devastate communities” and pit climate activists against workers.

Some elected officials in Philadelphia have urged PES to sell off the 150-year-old complex to a company vowing both to establish a sustainable future and create union jobs. In November, City Council passed a resolution urging bidders to adopt the city’s clean-energy goals, calling the refinery the city’s “largest stationary source of toxic air pollution.”

The split between the camps was on display during a Jan. 30 rally organized by the Philadelphia Building and Construction Trades Council that attracted about 500 people, who showered City Hall with boos. Labor leaders derided academic “elitists” and “rich kids” for valuing environmental causes over jobs.

Peter Winslow, an activist affiliated with a number of organizations including Green Justice Philly, said he and allies want to see a smooth transition that creates high-paying jobs while still advocating for a more sustainable future, “rather than one where we’re poisoning ourselves.”

“There is nobody in the environmental justice community who had any wish or responsibility for the refinery workers being out of work,” Winslow said. “They’re out of work because of their bosses.”

Carolyn McCoy, the protester who held the Mar-a-Lago sign in West Philadelphia, said of the refinery workers: “They were treated horribly.”

“We’re not against clean energy,” said Ed Harkins, political director of the International Brotherhood of Boilermakers Local 13. “We got mortgages.”

At the City Hall rally, labor leaders complained about Democratic politicians who seek union support during elections but aren’t helping to save their jobs at the refinery. Jim Snell, business manager for Steamfitters Local 420, invoked State Sen. Larry Farnese, who wrote a letter urging the bankruptcy court to reject bids that don’t align with the city’s climate goals.

“We had a good relationship until that day,” Snell said. “This is serious. And when you turn your back on us, I cut you off. You’re done.”

Farnese has said he backs Kenney’s push for the site to be developed, which may end its use as a refinery. “I certainly want to be supported by all labor and I want to work with them,” Farnese said.

At the rally, Dougherty said he found “100% an ally for jobs” during two visits with Trump officials.

Dougherty also warned that “a couple of tree-huggers” had derailed energy development efforts in Boston, vowing to prevent the same from happening here. Around him, union members carried signs disparaging Brian Abernathy, the city’s managing director, for his position on redeveloping the refinery site. One sign read: “Brian, worry about the guns, not our jobs.”

Union leaders who lambasted Abernathy from the lectern made no mention of Kenney, his boss.

Philly 2019, an independent political action committee funded by those same unions, raised $931,869 last year to support Kenney’s bid for a second term, even though the mayor faced sparse competition in the primary or general elections. Local 98 put up $400,000 of that money, while Steamfitters Local 420 kicked in $200,000. A similar building trades PAC spent $1.8 million in 2015 to help Kenney win the Democratic primary for mayor.

Progressive activists and labor leaders both say they want to find a way to bridge the gap in their interests.

“I know it’s a hard transition,” said Tim Brown, an organizer with Philadelphia Neighborhood Networks. “The fact is we absolutely, positively need to move to clean energy. … That’s where our politicians need to step up to make sure our arrangements are worker-focused.”

“You’re putting people in poverty,” he said, “and it’s hurting.”