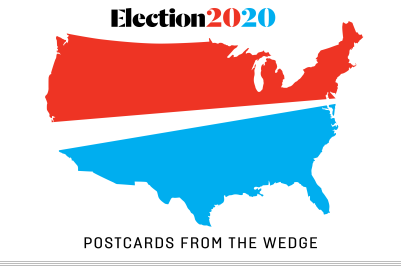 In the last decade, Democrats and Republicans in the United States have come to see Indian Americans as a demographic of growing influence. Although they make up just 1 percent of the electorate, Indian Americans comprise the second largest immigrant group in the United States (after Mexican Americans). And their numbers are expanding rapidly: According to the U.S. census, between 2000 and 2018 the Indian American population grew by nearly 150 percent. The community is also the highest-earning ethnic group in the country, with a median income of $100,000 in 2015—nearly double the national average that year. Accordingly, Indian Americans have been tapped as a donor-base for both parties, contributing nearly $10 million towards the Democratic ticket in the lead-up to the 2016 presidential elections.

In the 2020 presidential election, the Trump and Biden campaigns have made concerted efforts to air television advertisements targeting the Indian American voter. Competing Trump and Biden ads, in Hindi and several regional dialects, are running amid Bollywood films and telenovela-style Indian shows on popular South Asian networks in the United States such as TVAsia and Sony Entertainment TV.

By picking Kamala Devi Harris as his running mate—the California senator had an Indian mother and a Jamaican father—the Biden campaign has mobilized significant support from the Indian American community. Harris is vocal about her biracial identity, embracing her Indian roots, the impact of which is most visible at fundraisers. At a single fundraising event in September, the Biden Victory Fund raised a record-breaking $3.3 million from the Indian American community.

Of course, some have posited—either with worry or excitement—that Indian Americans are beginning to shift to support President Donald Trump in significant numbers, citing his friendship with Indian Prime Minister Narendra Modi, the two leaders’ comparable political styles and populist appeal, and their tough positions against the Islamic State. Such predictions are premature—at least for now.

As the 2016 election demonstrated, even small shifts can have major repercussions. Perhaps more important than the Indian American community’s relative affluence and generally high levels of education is the fact that there are significant numbers of Indian American voters in key swing states. Texas, Michigan, and Pennsylvania all have large South Asian communities, and given that the margins of victory are likely to be narrow, even small shifts in support could tip the balance.

While the majority of Indian Americans may still lean Democratic on domestic issues, there is also the so-called Modi factor. Many in the community continue to support Modi, and in particular his stance on the issue of Kashmir. Nearly a month after the Indian government revoked Kashmir’s special constitutional status, and amid widespread protests against his government’s human rights violations, Modi visited Houston, and was cheered on by a crowd of 50,000 supporters, including Trump. Modi is widely credited for making India more visible on the global stage. Trump and the Republican Party have drawn a clear connection between their support of India and the Indian voter, where Democrats have sometimes struggled, especially when it comes to Modi’s human rights record.

Accordingly, both parties are making big bets when it comes to the Indian American community. The Biden campaign is banking on the star power of Indian American celebrities and earlier this month hosted a virtual South Asian block party that featured celebrities such as Mindy Kaling, Lilly Singh, and Kumail Nanjiani in an effort to reach and motivate younger South Asian voters.

Similarly, the Trump campaign recently launched Indian Voices for Trump, a coalition of Indian Americans in government and the private sector led by Donald Trump Jr., whose mission it is to “honor the comprehensive global strategic partnership with India” and “build on our US-India partnership.”

Although Indian Americans tend to lean left, we have seen in the last four years that their party allegiances are not binding. The Modi factor is not a myth. While Indian Americans are seen as broadly liberal, the crowds rallying in Houston in 2019 told a different story: Like any other demographic group in the United States, the Indian American community is not a monolith.

Trump is attempting to overshadow his own harsh rhetoric on immigrants and wall-building by drawing a connection between his support for India and the Indian American vote. The influence of Indian American attitudes on Indian politics has led to an ascendence of foreign-born Indian American conservatives organizing under Trump and focusing on Indian domestic issues. Trump has pushed some donors to the right, particularly among those who see in the U.S. president a mirror image of Modi: a populist strongman who seemingly stands against Muslims. Recall that Trump’s support among Indian Americans has grown by 8 percentage points since 2016—a notable rise for a president who has garnered otherwise historically low approval numbers.

While the history-making vice presidential candidacy of Harris galvanizes her party’s Indian American supporters, both parties continue to court this voting demographic in battleground states. Having grown politically active, donating more to candidates and running for office, the visibility of Indian Americans will be hard to ignore. Republicans and Democrats alike are recognizing that the political dividends of targeting this community, for votes and campaign contributions, are significant. Meanwhile, Indian Americans are enjoying the spotlight.

The Note: Trump falls behind country, as political realities set in – ABC News

‘You can’t take any of them for granted’: The voters who will sway 2020’s swing states – USA TODAY