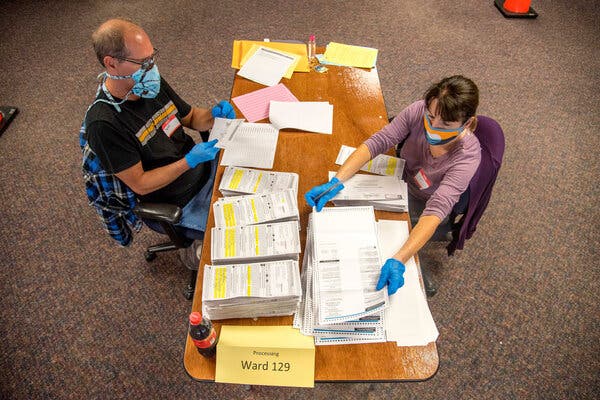 The Wisconsin Supreme Court ruled on Monday that the Green Party’s presidential candidate will not appear on the state’s presidential ballot, a decision that prompted a sigh of relief among election officials who had worried that a wholesale reprinting of thousands of ballots could bring chaos to an already stressed electoral system.

The decision against the candidate, Howie Hawkins, could also provide a small but potentially significant lift to Joseph R. Biden Jr., whose Democratic allies had expressed concern that a third-party progressive could siphon votes away from Mr. Biden and help President Trump.

Both the Biden and Trump campaigns view a path to victory through Wisconsin, which Mr. Trump carried by less than 23,000 votes in 2016.

Days before the start of mail voting, the court ruled that Mr. Hawkins and his running mate, Angela Walker, had waited too long to appeal a decision from the Wisconsin Elections Commission that denied their placement on the ballot, giving the court no recourse.

“Given their delay in asserting their rights, we would be unable to provide meaningful relief without completely upsetting the election,” the court ruled.

The Wisconsin Elections Commission had denied the request on Aug. 20 because of a discrepancy in Ms. Walker’s address on petitions, and it took the Green Party candidates two weeks to file a request for review with the court. The request was filed on Sept. 3.

The court did not rule on the merits of the Green Party case, but concluded that the candidates’ delay in a situation with “very short deadlines” made it impossible to grant the motion without causing “confusion and undue damage to both the Wisconsin electors who want to vote and the other candidates in all the various races on the general election ballot.”

Mr. Hawkins said in a statement after the decision, “We are screwed,” adding that it was “a travesty of justice.” He urged Wisconsin voters to write in the Green Party candidates.

In an interview on Sunday, Mr. Hawkins said his campaign had been working to find a lawyer to take its case to the State Supreme Court and had reached out to a number of progressive lawyers before finding a firm that would take the case, acknowledging that it was conservative and that its representation was being paid for by an unnamed conservative benefactor.

More than a million Wisconsin voters have already requested absentee ballots, and the prospect of an enormous reprinting would have affected every county and municipal election official in the state.

The petition had particularly irked the state Elections Commission, which noted the two-week delay to appeal the decision. In the meantime, elections offices around the state had gone forward with preparations to send out an unprecedented number of mail ballots, with Thursday the deadline to begin mailing them.

Wisconsin election officials said a wholesale reprinting of the ballots would have been an enormous challenge. The state, like many others, relies on specialized private vendors to print its ballots. Printings are expensive, time-consuming and difficult to schedule.

Both Mr. Hawkins and another third-party candidate who had sought to be placed on the Wisconsin ballot, the rapper Kanye West, appeared to be receiving help from Republicans, who view both men as potentially able to draw votes away from Mr. Biden. In addition to striking a blow to the Green Party, the Supreme Court’s decision did not bode well for Mr. West’s bid to be placed on the ballot.

The Elections Commission ruled last month that neither Mr. Hawkins nor Mr. West had qualified for the ballot, citing deficiencies in their applications. Late on Friday, a Wisconsin Circuit Court upheld the commission’s decision to keep Mr. West off the ballot.

The Supreme Court’s 4-to-3 decision on Monday came as a surprise to many Democrats, who had been worried that the conservative-leaning court would render a decision in the other direction.

The surprise vote came from Justice Brian Hagedorn, a former Wisconsin Court of Appeals judge who once served as legal counsel to former Gov. Scott Walker, a Republican.

Many observers had believed that Justice Hagedorn, who was elected to the court in 2019, would vote with the conservative bloc on the historically partisan court in this case, although he had occasionally sided with the liberals in other cases.

Mr. Hagedorn had pledged to be nonpartisan during his campaign for the state’s high court, saying he didn’t believe politics should play a role in judicial decisions.

“I’m surprised that the Supreme Court rejected the Green Party lawsuit, but I’m pleased that we will not have to spend money to reprint our ballots and we can send out our ballots now,” said Joseph J. Czarnezki, a member of the Milwaukee County board of supervisors. That county, the state’s most populous, had spent $128,000 on printing, and Mr. Czarnezki estimated that the statewide cost of reprinting would have been in the hundreds of thousands of dollars.

Mr. Hawkins had said on Sunday that he expected a vote in his favor. “Like everything up to this point, it will probably be a party-line vote and they’ll put me on,” said Mr. Hawkins, who expressed disgust with the Elections Commission’s decision to keep him and Ms. Walker off the ballot.

Mr. Hawkins defended his decision to be represented by a conservative law firm.

“Republicans have played these games before,” he said. “If we had the money and we could get a lawyer ourselves, we would do it that way.”

But Mr. Hawkins, a retired Teamster, said he was hoping to give voice to supporters of his progressive agenda focusing on three major issues — the climate emergency, growing economic inequality and nuclear weapons.

Despite the jockeying to add Mr. Hawkins and Mr. West to the ballot in Wisconsin, experts said it was not at all clear that a third-party candidacy would swing the election in the state.

In 2016, the Green Party presidential candidate, Jill Stein, received about 31,000 votes in Wisconsin, more than the margin between Mr. Trump and Hillary Clinton, though many of Ms. Stein’s supporters would not have voted had she not been in the race, experts said.

“The backers of Jill Stein were young and disaffected from the political system,” said Barry C. Burden, a professor of political science at the University of Wisconsin-Madison. “Typically, minor-party voters are looking for somebody that’s different from what the major parties are offering.” (The Libertarian candidate in 2016, Gary Johnson, received more than 106,000 votes in Wisconsin.)

Christopher Devine, a political scientist at the University of Dayton in Ohio, said third-party candidates generally do better when there is an open seat. When an incumbent is running, Dr. Devine said, the question comes down to, “‘Do I throw this guy out or keep him?’ Voters are less open to considering other possibilities.”

As of this week, 1,013,458 of the state’s 2.7 million active registered voters had requested absentee ballots in Wisconsin for the November election, according to data from the state Elections Commission.

The commission told the State Supreme Court that roughly 73,000 ballots had already been sent to voters for November, and that “it is possible that tens of thousands more ballots may already be sent by the time this court issues a decision” on whether to add Mr. Hawkins’s name.

It was unclear on Monday how the temporary pause at election offices around the state as a result of the court’s ruling last week had affected the mailing of absentee ballots.

Maribeth Witzel-Behl, the city clerk in Madison, the state’s capital, had tweeted earlier Monday that her office had 79,958 ballot envelopes ready to go to the post office “once we are given the go-ahead.”

Every voter in Wisconsin who was planning to vote by mail might be affected by a delay in the mailing of ballots, but those living overseas or serving in the military might face the most severe impact, because of longer delivery times. Under federal law, overseas ballots are supposed to be mailed to voters by Saturday.

Worries have risen in Wisconsin that the frenzy of legal maneuvering over the election is creating distrust among voters.

J.B. Van Hollen, a former Wisconsin attorney general and a co-chair of a bipartisan organization called VoteSafe, which is working to ensure safe voting in Wisconsin, said his group was encouraging voters to “look past the uncertainties.”

“With the legal wrangling, and the uncertainty as to whether these ballots are going to be changed and printed later, if people want to vote absentee, the best bet is to do it as soon as possible,” said Mr. Van Hollen, a Republican. “At least their request is already in.” 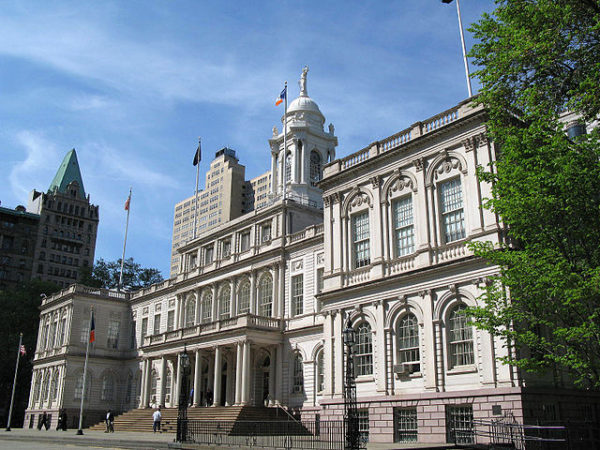 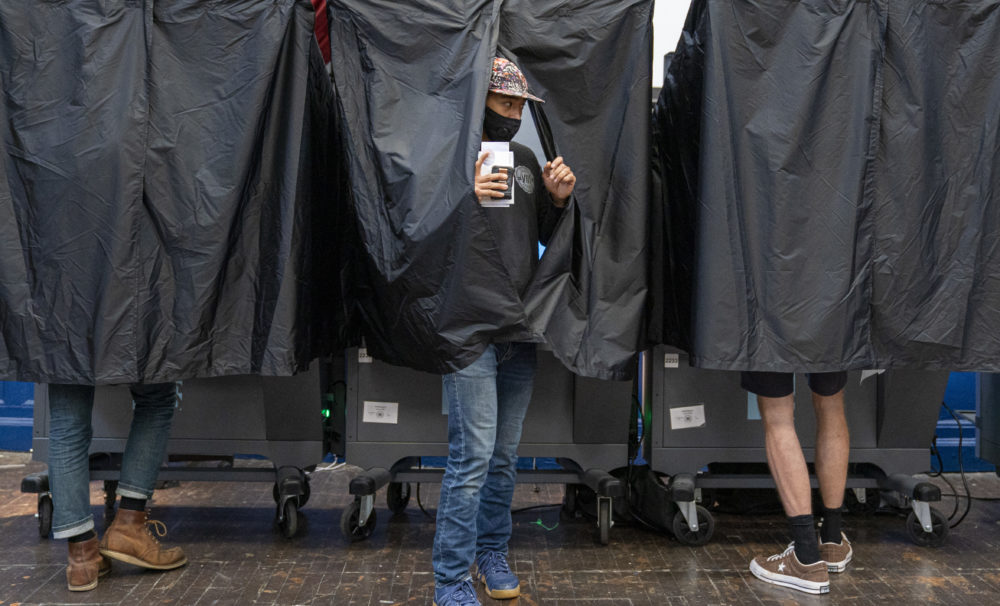