MNF: The latest scores and updates from Steelers vs. Giants and Titans vs. Broncos

SANTA FE, N.M. (AP) — New Mexico is prepared to spend millions of dollars in federal recovery funds to install drop boxes for absentee ballots as election regulators encourage voters to participate in the general election in ways that minimize human contact and reduce the risks of COVID-19 transmission.

Secretary of state’s office spokesman Alex Curtas on Monday said the agency is encouraging the state’s 33 counties to install ballot drop boxes — indoors and outside — while offering reimbursement for expenses from a $6 million allotment of federal funds that also pays for personal protective equipment and publicity about voting.

“We will reimburse all of those expenses,” said Curtas regarding drop boxes. “We are definitely seeing that many but not all counties are interested in that.”

The administration of Democratic Gov. Michelle Lujan Grisham has urged voters through an emergency public health order to cast absentee ballots by mail while limiting the number of voters inside each polling location to four people or 25% of the building’s capacity, whichever is greater.

As in previous elections, voters can deliver absentee ballots by hand at polling places and clerks’ offices. Drop boxes would “preserve the health and safety of county clerks and their staff, election workers, and voters themselves,” said the memo to county clerks.

Michigan, Georgia, Colorado and Arizona are among the states adding more drop boxes as experts warn that voters must be diligent in requesting and returning absentee ballots well ahead of Election Day.

In New Mexico, ballots must reach their destination by 7 p.m. on Nov. 3 to be counted. Emergency voting legislation in June stepped up the deadline for non-overseas ballot application requests to Oct. 20 — a week earlier than usual to build in time for mailing applications and ballots.

“County clerks are encouraged to allow for drop boxes to be available at every county clerk’s office, early voting and related equipment that allows election workers to keep the boxes securely locked and attended,” the memo states.

Absentee ballots accounted for 63% of votes in the statewide primary, up from 7% in the 2016 primary, as overall participation also spiked.

Republican Party Chairman Steve Pearce has accused the governor and Secretary of State Maggie Toulouse Oliver of “gaming” the election system with rigorous guidelines on in-person voting, even though retail stores adhere to comparable restrictions concerning masks, social distancing and a 25% capacity limit.

“I believe it’s … safe to vote at the polls but I don’t think that our secretary of state is going to let us,” Pearce said in a podcast last week. “She knows that President Trump is going to win big on Election Day because Republicans typically vote in person. And so I think that we’re being gamed once again by our governor and by the secretary of state.”

On behalf of the secretary of state, Curtas said social distancing requirements at early and Election Day voting centers are similar to what people encounter in other public settings.

“There are multiple ways people can cast a ballot,” he said. “If you don’t feel comfortable casting a ballot through the mail, you can obviously go to a polling place.”

PHOENIX (AP) — Republican Sen. Martha McSally expressed concern to GOP activists that some supporters of President Donald Trump may not vote for her, an indication of her struggles to avoid the defection of Republicans whose support she’ll need to keep her seat.

WASHINGTON (AP) — President Donald Trump has been putting forth convoluted guidance to his supporters on submitting double votes in the November election, an act that would be illegal and risk public safety in the pandemic.

As millions of American children start the school year online, the Trump administration is hoping to convert their parents’ frustration and anger into newfound support for school choice policies that Education Secretary Betsy DeVos has long championed but struggled to advance nationally.

NEW YORK (AP) — Bob Woodward, facing widespread criticism for only now revealing President Donald Trump’s early concerns about the severity of the coronavirus, told The Associated Press on Wednesday that he needed time to be sure that Trump’s private comments from February were accurate.

Trump and Biden exaggerated accomplishments over the past week — Trump about himself and Biden about his son, Beau — as well as their own influence in reviving the auto industry. Here are the facts.

Election Watch: How long can Trump ride ‘law and order’? And more to know this week in politics

With 55 days until Election Day, here’s what’s buzzing this week on the campaign trail.

LAS VEGAS (AP) — In open defiance of state regulations and his own administration’s pandemic health guidelines, President Donald Trump hosted his first indoor rally since June, telling a packed, nearly mask-less Nevada crowd that the nation was “making the last turn” in defeating the virus.

RALEIGH, N.C. (AP) — Hundreds of ballots were accepted in North Carolina on Tuesday, making the Tar Heel State the first in the nation to kick off voting in the November general election.

Bloomberg to spend at least $100M to help Biden in Florida 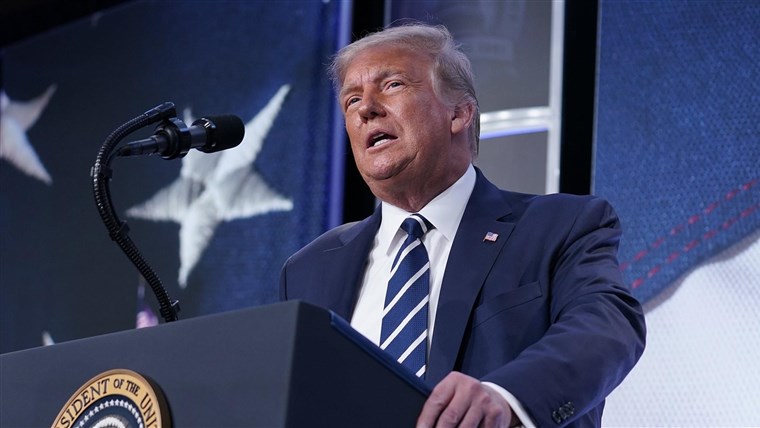 N.Y. Gov. Cuomo blocks some federal judges from officiating at weddings — because they might be Trump nominees – NBC News