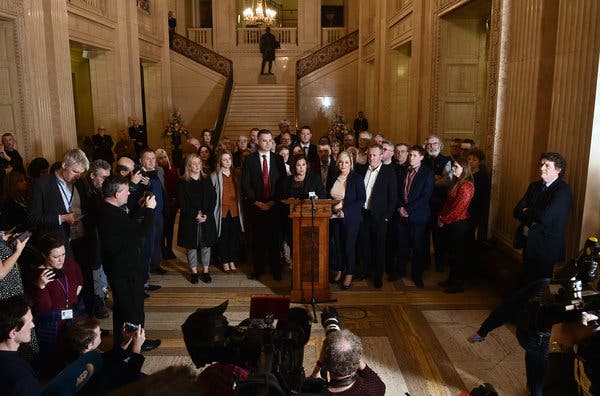 The government in Northern Ireland is led by Sinn Fein, the main nationalist party, which supports unification with the Republic of Ireland, and the Democratic Unionist Party, or D.U.P., which wants to maintain close ties to Britain. It collapsed in 2017 amid sectarian rifts over cultural and social issues.

The power-sharing deal announced Friday followed nine months of negotiations. Although neither party was entirely satisfied, they both concluded that restoration of the coalition government would be better than facing yet another election.

In last month’s general election, voters punished the two parties for the long political gridlock as a new centrist party and smaller nationalist parties siphoned some of their support.

“We now have the basis to restore power sharing, and we’re up for that,” Mary Lou McDonald, the president of Sinn Fein, said at a news conference on Friday.

“There’s no doubt there are serious challenges ahead: the impact of Brexit, austerity and other pressing issues. But the biggest and most significant challenge will be ensuring we have genuine power sharing built on equality, respect and integrity,” she said.

Arlene Foster, the leader of the D.U.P., said that while the deal was not perfect, it offered the basis for a “fair and balanced way” forward.

The legislature’s absence has created a leadership void that has strained public services, pushing the regional health service, in particular, to the brink of collapse.

Although Northern Ireland is a part of the United Kingdom, locally elected ministers make decisions on health, social care and education policies. In their absence, civil servants have been forced to manage daily affairs, leaving broader matters neglected.

Britain’s exit from the European Union on Jan. 31 had added pressure on the parties to restore the government. The withdrawal agreement effectively draws a border down the Irish Sea, leaving the region more closely aligned in trade with the European Union than with the United Kingdom.

This has enraged unionists, who support the preservation of the political union between Northern Ireland and the rest of the United Kingdom. They have called the arrangement a great “betrayal” that undermines the Good Friday peace accord that ended the region’s dirty guerrilla war.

The deadlock in Northern Ireland stemmed from the introduction of an Irish-language act that would have given Gaelic the same status as English, a measure that had the D.U.P. up in arms.

The power-sharing agreement does not include the Irish-language act. But it does establish a “language commissioner” who will “celebrate and support all aspects of Northern Ireland’s rich cultural and linguistic heritage.”

“I was impressed that a consensus of sorts was reached on cultural issues, but let’s see how well Stormont functions now,” said Daniel Keohane, an Irish political analyst, referring to the Northern Ireland legislature. “There are a lot of issues to be addressed, like health care and investment, and the impasse of the last few years shows how difficult local politics can be.”

One of the main priorities under the new agreement will be to reform the region’s health service and settle an ongoing pay dispute with thousands of nurses, who have demanded pay parity with the rest of Britain. It also calls for a mental health action plan to confront the region’s suicide rate.

The business community breathed a collective sigh of relief when details of the agreement emerged on Friday.

With Brexit approaching, “the need for a strong voice from Northern Ireland has never been more important,” said Angela McGowan, the Northern Ireland director of the Confederation of British Industry.

“After three years of underinvestment and political stalemate,” she added, ”this bold and ambitious deal is what Northern Ireland needs to get back onto its feet.”