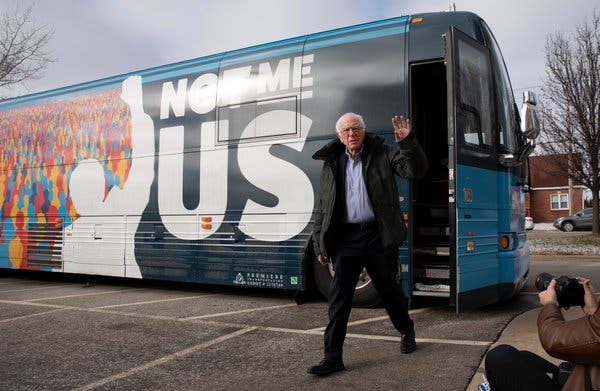 Senator Bernie Sanders of Vermont and former Vice President Joseph R. Biden Jr., two front-runners in the Democratic presidential race, are mounting a late push to gain a decisive advantage in the early primary and caucus states, aiming to avert a monthslong delegate battle against two insurgent rivals — and each other.

Mr. Sanders and Mr. Biden appear nearly deadlocked in the early states with Senator Elizabeth Warren of Massachusetts and former Mayor Pete Buttigieg of South Bend, Ind. Mr. Sanders held a slim lead in Iowa in a poll published Friday by The Des Moines Register and CNN, while recent polls in New Hampshire have found the leading candidates closely bunched. Mr. Biden has held a more consistent advantage in Nevada and South Carolina, the other states to vote in February.

In a sign of how extraordinarily fluid the race remains less than a month before voting, all four of the top candidates are in a position to win both Iowa and New Hampshire, an outcome that could transform the race for any of them.

Mr. Biden, the leading candidate in national polls, is especially determined to deny his challengers a chance to seize sudden momentum in the first few primary and caucus states. Hopeful of an early victory, Mr. Biden quietly dispatched his deputy campaign manager, Pete Kavanaugh, to move to Des Moines late last year to oversee his Iowa campaign. And in recent weeks Mr. Biden has made Iowa the most urgent priority on his travel schedule.

His support in the state has remained flat, however, and he will need a late surge to win the Feb. 3 caucuses. In the Register poll on Friday, Mr. Sanders held the lead there with 20 percent, followed by Ms. Warren at 17 percent, Mr. Buttigieg at 16 percent and Mr. Biden at 15 percent. The poll, which had a margin of error of 3.7 percentage points, is likely to both embolden supporters of Mr. Sanders and galvanize moderate Democrats who are fiercely opposed to his nomination.

This is the first time that Mr. Sanders, 78, has finished atop the Register poll, another sign that he has reinvigorated his campaign just three months after having a heart attack. Jeff Weaver, a senior adviser to Mr. Sanders, said on Friday night that the campaign was “extremely encouraged” by the poll and that Mr. Sanders was focused on driving up turnout in the caucuses.

“Clearly the trajectory is in the right direction,” Mr. Weaver said, adding, “If we have a big caucus turnout, Bernie Sanders will win the Iowa caucuses.” 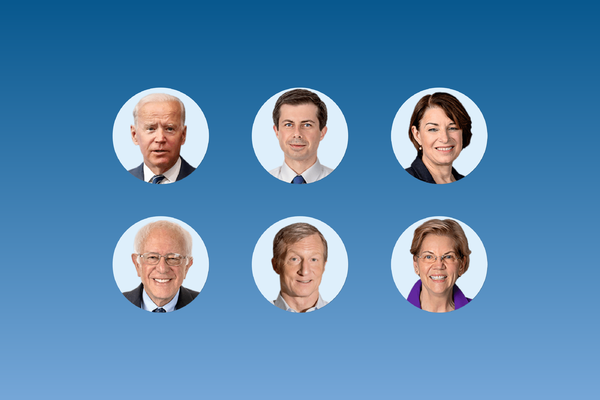 There are 13 Democrats running for president. Here’s the latest data to track how the candidates are doing.

Both Mr. Sanders and Mr. Biden have been seeking to take control of a race that has been shaken and shaped for much of the year by candidates with fresher faces and new ideas. Ms. Warren and Mr. Buttigieg are chief among them, having built strong campaigns in Iowa and New Hampshire and each seizing the lead there for a time. Now, both are girding for a monthslong quest for delegates across 50 states.

Against a backdrop of impeachment in Washington and violence in the Middle East, Mr. Sanders and Mr. Biden are trying to turn President Trump’s clash with Iran to their own advantage in Iowa, a Midwestern state with strong strains of antiwar sentiment and ideological moderation. Mr. Sanders has used his powerful financial position to mount the largest advertising campaign of any candidate in the state, and he has been emphasizing his long antiwar record while delivering increasingly pointed criticism of Mr. Biden’s past support for foreign trade deals and the 2003 invasion of Iraq.

Mr. Biden has begun airing ads in Iowa calling this “the most dangerous moment in a generation,” and at a speech in New York this week he sought to re-engage in a direct debate not with his primary rivals but with Mr. Trump. At a meeting of political donors in New York on Wednesday, close advisers to Mr. Biden argued that the atmosphere of crisis would work to his advantage, people who attended the meeting said.

Both men brought valuable advantages into the race from the start, including sharply defined public images, Mr. Biden’s popularity among black voters and Mr. Sanders’s immense donor base. Mr. Biden has consistently led the field in national polls, while Mr. Sanders has been by far the most successful fund-raiser, collecting nearly $35 million in the last quarter of 2019.

“The story of the race is the resilience of those two guys,” said Paul Begala, a longtime Democratic strategist.

It is by no means certain that either Mr. Biden or Mr. Sanders can secure a tight grip on the nomination without a long fight, and that possibility could evaporate if Ms. Warren or Mr. Buttigieg were to score an upset victory or two at the start. Ms. Warren was set to campaign in Iowa this weekend beside Julián Castro, while Mr. Buttigieg announced plans for a town hall with the singer and actress Mandy Moore.

Right now, veteran Democrats in the early states say voters remain overwhelmed by all the options in a field that still features 13 candidates. In the Register poll, only two-fifths of respondents said they had made up their minds, far fewer than at this point in 2016.

“It’s almost like with a little kid — if you offer them too many choices, they’re frozen,” said Representative Annie Kuster of New Hampshire, who is still determining whom she’ll support. “Because the stakes are so high, they don’t want to get it wrong.”

It’s not just voters who are reluctant to pick a candidate. Traditional party allies like labor organizations are also taking their time.

“I just don’t see any of us doing anything before Iowa,” Randi Weingarten, the president of American Federation of Teachers, said about her fellow unions.

The Democratic Party’s delegate allocation rules virtually ensure a drawn-out primary season if there are still three or four competitive candidates after the so-called Super Tuesday primaries on March 3, when about 40 percent of all the delegates are at stake. Michael R. Bloomberg, the billionaire former mayor of New York City, will also become a factor then, since he has opted to skip the first four states to concentrate on later contests.

Mr. Bloomberg’s advisers, however, have indicated to Democratic officials that he would not be inclined to keep pouring hundreds of millions of dollars into a prolonged contest with Mr. Biden for the nomination. If the former vice president emerged as an overwhelming favorite after Super Tuesday, Mr. Bloomberg would reorient his campaign into an organization dedicated to battering Mr. Trump, the advisers said.

Mr. Biden and his allies hope the race will not last long enough for Mr. Bloomberg to become a troublesome factor, and there have been new signs over the last week that the Democratic Party establishment is eager to help. Mr. Biden has unveiled a series of endorsements from Democratic leaders from battleground districts, including Mayor Eric Garcetti of Los Angeles on Friday.

And after months of internal pessimism and external expectation-setting about his prospects in Iowa, Steve Ricchetti, a top adviser to the former vice president, has told other Democrats he thinks they can win the state outright.

But Mr. Biden’s advisers privately concede that a fourth-place finish could be damaging, and the Register poll indicated that he could capture political gold or be out of the medal hunt there altogether.

“If Biden were to finish first in Iowa and then first or second in New Hampshire, it’s very hard to see him being stopped,” said David Plouffe, who ran former President Barack Obama’s 2008 campaign.

The same could be true of Mr. Sanders: His campaign believes he is well positioned to win three of the first four states — with the Biden stronghold of South Carolina as the lone holdout — and then cement his control of the race on Super Tuesday, when Mr. Sanders’s financial strength and popularity with Latino voters could give him an edge in states like California and Texas.

But Sanders allies concede that he will have to add more support from racial minorities, especially African-Americans, in order to clinch the nomination.

“The hope is that our momentum gives people a chance to look at Bernie’s record on civil rights, on mass incarceration, on a lot of other issues,” said Representative Ro Khanna of California, a co-chairman of the Sanders campaign.

Unlike Mr. Biden, Mr. Sanders would have to overcome deep reservations in the party establishment about his strength as a general-election candidate.

“Bernie is a disaster for me in South Florida,” said Representative Donna Shalala, a first-term Democrat who faces re-election in a swing district where Mr. Sanders’s embrace of socialism is deeply unpopular with many Latino voters. Ms. Shalala, who has not endorsed a candidate, suggested the nomination might be resolved in a brokered convention and predicted Mr. Sanders would “stay in the primary right down till the end.”

For all his team’s optimism, Mr. Biden has yet to gain ground in Iowa and is no better than tied for the lead in New Hampshire, and his campaign could be stretched thin in bigger primary states, where he has done less than his top rivals to build out operations. Even some allies of Mr. Biden concede that Mr. Sanders and Ms. Warren have superior campaign organizations in many of the February and March states.

Still, at a meeting with Democratic donors in New York this week, advisers to Mr. Biden projected confidence. Mr. Ricchetti told the group that voters would reward Mr. Biden for consistently delivering a moderate message, while Tom Donilon, a former national security adviser in the Obama administration, said the Iran crisis had reinforced the value of “a pair of safe hands” in the presidency.

“I think the objective fact is that Biden is the most experienced foreign policy person in the field, and I think that’s been highlighted,” Mr. Donilon said in an interview, adding that Mr. Biden’s critique of Mr. Trump, delivered in Manhattan on Tuesday, “was a really sharp contrast” with the incumbent.

Other campaigns are not convinced that events abroad will work so neatly to Mr. Biden’s advantage, since they also highlight his support for the 2003 invasion of Iraq.

Representative Anthony Brown of Maryland, who on Thursday became the first black member of Congress to endorse Mr. Buttigieg, said in an interview that Mr. Biden’s credentials would not decide the race.

“Certainly, Vice President Biden, we know his résumé,” said Mr. Brown, who like Mr. Buttigieg is a military veteran. Mr. Buttigieg “understands the drag on the nation, being in these forever wars, because he served in one of those, not because he made the decision to send us,” Mr. Brown said.

There is still hope among the underdog candidates that an unsettled race could lead to a late breakout. But the Register poll offered little encouragement: The next-strongest challengers, Senator Amy Klobuchar of Minnesota and the tech executive Andrew Yang, were both stuck in the mid-single digits.